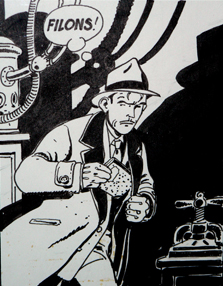 My wife and I recently traveled to Belgium. She worked, I looked for interesting art. Yah sure, there is Musées Royaux des Beaux-Arts de Belgique with Flemish masters galore, but that is not nearly geeky enough. If you’re the kind of Geekdad who loves his comics, then you will want to make sure you visit Centre Belge de la Bandes-Dessinés the next time you are in Brussels. 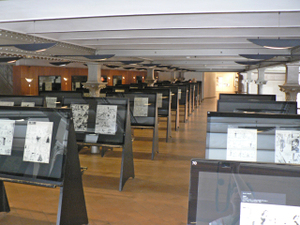 You have to love a country that reveres its comic artists. The museum showcases the lives and work of the greats of Belgian cartooning – Hergé, Franquin, Jacobs – primarily, but one floor has an impressive display of French and Belgian strips of all decades since the birth of the form in the 1930s. Best of all, the museum makes no distinction between the "American-style" newspaper strip like "Beetle Bailey" and the full-page, "European-style" graphic stories like "The Adventures of Tintin." In Belgium, the form is considered the "Ninth Art" and is neither geeky nor childish. In an age of explosive manga, it is good to ground oneself in solid visual storytelling.

The French comics periodicals of the 1930s and 1940s brought visual storytelling and caricature to the height of form and expression, heights the broader U.S. culture never quite appreciated until recently. I had not thought of many of these artists in years, and it was great to become reacquainted. My French is also not up to snuff, so I was forced to examine artistry and style rather than content. It was great to watch the evolution both in layout and character over time. Regular systems of panels and camera angles dominated the 30s to the 60s, such as that found in Tibet’s boy detective "Ric Hochet," a sort of Encyclopedia Brown-type complete with upside down answers to the mysteries. This style gives way to more free form and expressive draftsmanship in the 70s and 80s such as in Walter Fahber’s "Cobalt." Strips with big-nosed fall guys, gags, and exaggerated gestures are the order of the day for a long time and evolve into more realism and detail, with tons of social commentary and atmosphere. 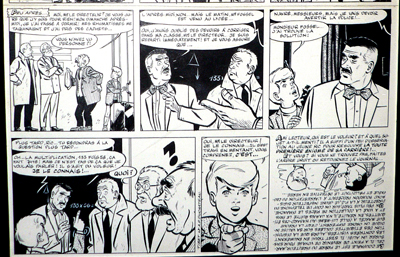 One artist who should appeal to Geekdad and kid alike is the great E.P. Jacobs. Jacobs was an innovator who brought the fantastic, as well as almost overdone realism, to comics at a time when wacky caricature and hijinks were the familiar style. He is most known for the "Blake and Mortimer" adventure comics (which hint at the origins of steampunk), but he brought the space opera to a European audience when he took the reins drawing "Gordon L’Intrepide" after the Germans banned the import of Alex Raymond’s "Flash Gordon" in the early days of World War II. His own creation, "Le Rayon U," created flying machines and space weapons that set the style for numerous artists for decades. 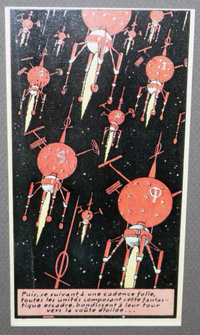 It was a guilty pleasure wandering this museum sans geeklets. My daughter has a great eye and shares her dad’s affection for cartooning and cartoonists. I could not help walking alone through the museum looking at these displays in the context of what she might think. She sure liked my pictures, so I think she would have had as much fun as I did. 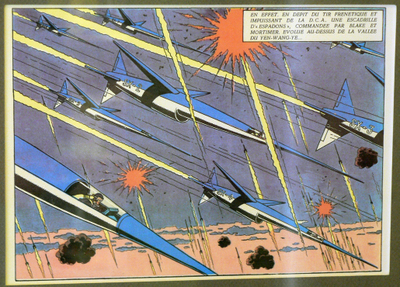