I have been living and breathing fort-building projects the last few weeks for a "Fort Week" we’ve been running on Z Recommends this week. We’ve published hands-on reviews of the Fortamajig and the Cranium Super Fort, made a homemade teepee, and started a Couch Fort Flickr pool, but some of our best fun has been had with Mr. McGroovy’s Box Rivets, an ingenious aid to cardboard fort-building that should be in every Geekdad’s kid-wowing toolbox.

We’re running a contest through Saturday to give away a box of Mr. McGroovy’s rivets to three stellar individuals who suggest the coolest fort designs that are not yet extant in Mr. McGroovy’s battery of fort-building plans. Adam McGrew, inventor of the rivets and passionate cardboard fort tinkerer, has even promised to generate design specs for his favorite one.

As of Geekdad Jim Jones’ entry this morning, things are starting to get interesting. He picked up on a suggestion by Kevin Kelly in his own "Cool Tools" review of Mr. McGroovy’s rivets that the rivets could be used to make moving joints. This is something that none of McGroovy’s current plans address, and posits a very interesting additional advantage the rivets have over the duct tape and swearing that accompanied the cardboard fort-building of pre-geek civilizations.

That got me thinking, and thinking gets me nowhere, so I turned to Jim’s amazing wife Adrienne, the blogger behind Baby Toolkit, and picked her brain. Guess what came spilling out? 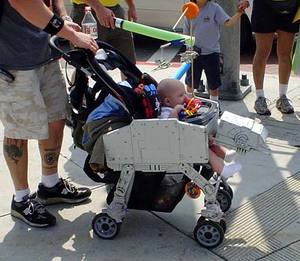 That’s right. The AT-AT stroller mod of lore, diligently researched by AJ at Thingamababy. If rivets were used to create two joints in each leg, the leg parts were lengthened a bit, and the feet were properly attached to the a position on the outer edge of each wheel (locomotive-style), you would have an AT-AT stroller mod THAT WALKED when the stroller rolled. The only improvement I can see beyond this would be to arm it with actual, devastatingly destructive laser weapons.

But why stop at the AT-AT? Why not a dog, a dinosaur… the sky’s the limit!

You can check out Mr. McGroovy’s box rivets on the company’s website, find out what we thought of them and see the train we built in our review, and enter to win the contest. We’re accepting entries through Saturday, with the inventor selecting the top three ideas, sending rivets to all three winners, and promising to create design specs for his favorite idea within a week. My hunch is that some of the best cardboard-construction project ideas could come from GeekDad readers. Jot a few down in our comments or on your own blog (see our contest post for details) and you might win some free rivets, or even see it sketched out and posted to Mr. McGroovy’s site for others to use.

The Water-Powered Car Clock Is Not a Myth!