Thanks to cheap, all-but-unbreakable kids’ digital cameras and free photo-sharing sites, younger and younger kids are taking photos and sharing them with friends, family, and the world. We started our daughter out with a Fisher-Price "Kid-Tough" Digital Camera on her second birthday, (the camera is sold in blue "boys"’ and pink "girls’" versions). The FP camera is disparaged by parents of older children who are capable of handling electronics without breaking them in 5 seconds, but it won’t break the bank and pretty much won’t break, period, thanks to its heavily rubberized shell. It’s pretty ludicrous that they actually sell a case for it at all; you’d probably have to drop it from a second-story window to need one.

The key downside to the FP camera is its low resolution. Poor image quality and other limitations we can handle, but we really wish we weren’t so limited by image resolution – at a jaw-droppingly low 640×480 in their "raw" format, they’re basically locked into the digital world. But despite our inability to adorn mugs and calendars with her great shots, or even to get prints made so we can frame a few, we’re convinced we’re starting her off right: This is a camera a two-year-old can actually figure out how to use, and enjoys using (overly-accessible "Trash" button notwithstanding). 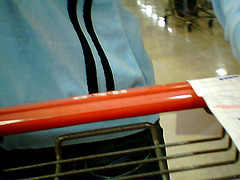 So we make the most of it, sharing our daughter’s photos on Flickr and sending them to relatives. As soon as she’s old enough to handle a "real" camera (we’re guessing at age 3.5-4) she’ll upgrade to a cheap, used camera – digital, and if we’ve managed to set up our home darkroom by then, a manual 35mm camera as well, and an unending supply of pinhole cameras. Watching what other children are doing with photography in Flickr’s Children Are Taking Photos pool inspires us with future possibilities. For now, we love getting this glimpse into our almost-three-year-old daughter’s world, where a lot of things happen below our eye level, and experiencing through her that innocent, primal magic of image-making. It’s just one more way for us to get inside that brain of hers and try to keep up.

How To Build a World: The Basics

Marshmallows: Not Just For Roasting Anymore