My toddler son is obsessed with gadgets.  He is in that "cause and effect" stage.  He understands that flipping a light switch turns on a light and has the uncanny ability for finding the power button for any electronic device.

In some ways, as a Geekdad, this makes me well up with pride.  In others, particularly when I haven’t saved my work and I see a tiny finger coming from behind the laptop screen, it can be a serious problem.  Sometimes we can placate him with toy substitute for a real device like a toy cell phone.  As with any obsession, this only works for a while.  He inevitably gravitates back to the real thing to our joy and dismay.  It would be great to constructively encourage his interests, but most gadgets (even kid versions from vtech) are damn expensive and prone to the damage that only a child can inflict as pointed out by Brad’s recent Rock, Paper, iMac post. 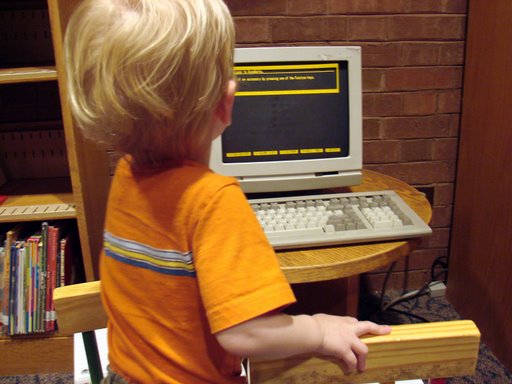 It wasn’t until we made a trip to the Bartholomew county public library in Columbus, Indiana on a recent family outing that we stumbled onto a solution.  The children’s section of the  library has an old terminal set aside specifically for the little ones to bang away on.

It’s a brilliant solution.  Terminals are cheap.  The library used an old one of theirs, but you can pick one up on eBay for as little as twenty five bucks.
There’s no hard drive to crash as everything loads from non-volatile
ROM and most fixes only require turning it off and on.   For a child in the cause and effect stage of development, getting feedback on the screen by hitting random keys on the keyboard appears to be quite delightful (if my son is any judge).

We’re currently looking for a good deal on eBay and may expand the setup, if possible, by adding a cheap printer for even more fun.  I would also recommend a securely attached rubberized keyboard cover to make it harder for keys to be pulled off (a potential choking hazard).

Silly Dragon, Robots Are for Toddlers