Arriving a little early, we stopped to check out the venue for the team’s long term "Large and Small of It" skit/presentation. A great old theatre, the Fairchild, with a lot of wood. The backstage setup is a bit tight. 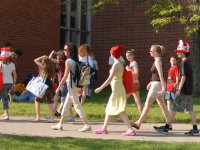 One team was in the hall inspecting their set. True to OotM, the coaches were a distance away talking among themselves and the kids were worrying over the travel-produced scrapes and bruises that their props and inventions had taken on. A boy looked back to the coaches and his fellow team members; he had found a big crack. What to do? The coaches didn’t say anything. But one of his team members ran over to a powerplug and jacked in her solution. "Clear out! Danger! Red head with a glue gun!" she shouted.

Things were under a kind of control.

Around the campus, we saw some of the
hats that are such are a big deal at OotM gatherings And of course, pins which can represent a state, a country, a team, or even a long term problem being worked on. Pins are traded all over sometimes giving the appearance of a large meet up with budding sidewalk "Rollex" salesmen. 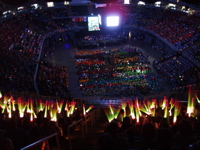 The OotM Opening Ceremony has been said to be modeled on the Olympics, but there are only a few similarities. The States and Countries in do send representatives to march into the stadium. Brief bits of the national anthems are played. The ceremony ends with a shout in unison of "Let the Games Begin." Really the Opening ceremony is more like a stadium concert with laser lights and smoke machines and loud music. Well, maybe a bit of both.

This year’s opening ceremony completely filled MSU’s Breslin Arena. Over 800 teams are here to compete. Among the countries represented are Germany, Korea, Kazakhstan, and Mexico.

When we left our team, they were looking for their international buddies, the team from Fushan Jiujiang Town Middle School in Guangdong, China.

Note: Some image links via the official Odyssey of the Mind Gallery site.