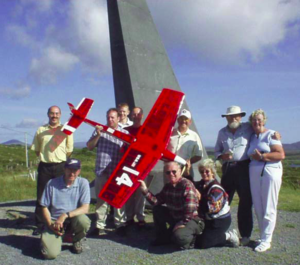 On August 9th, 2003, a team led by 77-year-old Maynard Hill achieved his life’s dream of flying "The Spirit of Butts Farm", an autopilot-equipped R/C plane, across the Atlantic. Four previous planes had failed, due to both software and hardware glitches, but the team had refused to give up. When the fifth model took off in Newfoundland and finally landed in Ireland "two sunsets later", on August 11, it had set world’s records for both duration (38.5 hours) and distance (3,030 km).

The team did amazing engineering on everything from the laminar flow of the airframe to the hypereffecient carburetor that let the four-stroke engine go six hours on 12 oz of fuel, an amount that would last a standard R/C plane just ten minutes. Most impressively, the team built a gryo-based autopilot with GPS navigation and a satellite uplink for telemetry, pretty much from scratch.

For those of us who struggle with the far better technology of 2007, the accomplishments of Hill and his team are still stunning.  You can read his story in his own words here (the good stuff about the last flight starts here). Maynard Hill, GeekDad salutes you!

A Google-a-Day Puzzle for Monday, May 30th