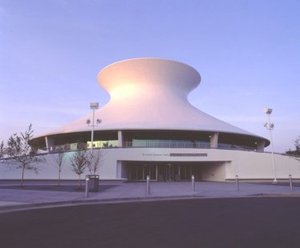 Becky Zoole Elkana writes in with a list for St Louis:

"Sure, there’s the St. Louis Science Center with its IMAX theater and planetarium. But there’s a lot else for geeks to do in this city!

"Explore one of the largest collections of transportation vehicles in the world, including our star attractions – over seventy real locomotives representing the rail power that built America. You’ll also find intriguing cars, buses, and trolleys dating back to the turn of the century. There’s even have an aircraft or two…. and some interesting riverboat material to round out the presentation of the many ways things move across our vast country."

For older kids (ages 10 & up), how can you beat spending a day learning how to make things out of 2000 F molten glass?

"Housed in the 600,000 square-foot former
International Shoe Company, the museum is an eclectic mixture of children’s playground, funhouse, surrealistic pavilion, and architectural marvel made out of unique, found objects." Includes a working shoelace factory, the
"Corn Dogs Through The Ages" exhibit, and a 3-story maze that incorporates a fire engine and two aircraft fuselages.

Children’s science museum with something for all kids, from a "texture tunnel" for babies to a science lab for teens.

"The panoramic history of the Boeing Company’s more than eight decades of aviation progress, from biplanes to space travel."
Scale models and engineering mockups of spacecraft, jetliners, attack helicopters."