Hello, humans.
Now that you’ve been awakened from your Covert Hibernation Vault™, it’s time to resume testing. To motivate the best results, you’ve been divided into divisions and assigned a jumpsuit in your new favorite color. The best performing division will be forever remembered in the history book I’m writing entitled: “Team of Rivals: The Scientific Genius of <insert jumpsuit color here>.” Good luck!

So begins the instruction manual for Portal: The Uncooperative Cake Acquisition Game, a game for 2 to 4 players, aged 12 and up and plays in 30-45 minutes, from Cryptozoic Games. (More information and rest of the rules here.)

Portal is played on fifteen Test Chambers, arranged in three rows. Players add their Test Subjects to the Chambers (and sometimes Cake), while trying to avoid turrets, Companion Cubes, and the incineration of their own Cake. Players compete to earn the most Cake slices while destroying opponents’ Test Subjects. The player with the most Cake in play at the end wins.

Each player has eight Test Subjects and eight slices of Cake. Additionally, there are cardboard Test Chamber panels, a couple of Portals (blue and orange, of course), a cardboard standee of GLaDOS, a number of wonderfully designed cards, and plastic minis of a Companion Cube and a Turret. 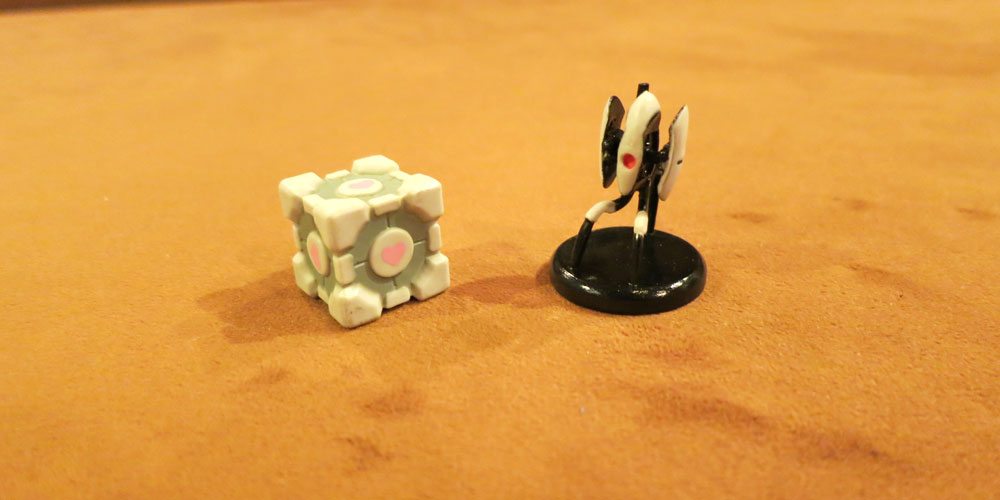 All of the plastic pieces: the Test Subjects, the slices of Cake, the Companion Cube, and Turret are perfect. Beautifully sculpted, molded, and painted. They are almost worth buying the game for, by themselves. The standee of GLaDOS is just a standee. I wish it could have been more, but GLaDOS is elaborate and cardboard probably makes the best sense.

The cards are a nice weight of paper on a linen stock and the art and design on these cards is very evocative of the video game with iconography and flavor text that will take you to the Enrichment Center in an instant. On one side, the Aperture side, are a number of effects that a player can play on herself or on others. After playing the Aperture side of the card, it is flipped and discarded, revealing a character card that has a lasting effect shared by all players (until replaced by another character card). 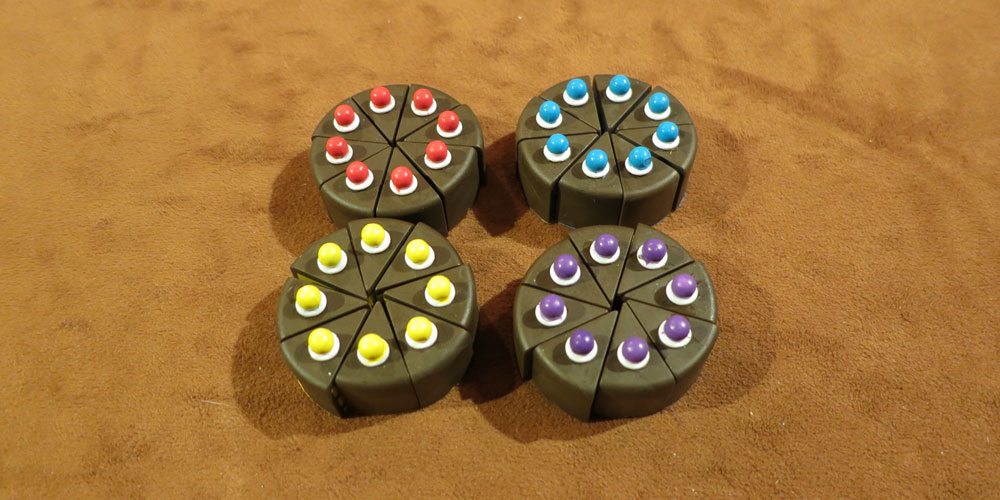 The weakest part of the components are the Test Chambers, which are sometimes difficult to fit together. This is unfortunate because the game requires their continual movement. The artwork is very nice, but the Chambers are supposed to fit together like a puzzle and some are too tight to really piece together easily.

The box is also worth mentioning for several reasons. The artwork was designed to look like something out of your parent’s game closet from the ’70s. It has been printed to look aged and the back is exactly what you’d expect from the twisted, errr, scientific minds at Aperture Laboratories (see photo). Additionally, there’s a board you place over the box’s insert that allows one of the insert’s bins to act as an Aperture Science Facility Emergency Intelligence Incinerator.

Oh! There’s one more component in the box: a card with a free activation code for Portal 2 from Steam!

Everyone chooses a color and takes a Portal Gun card, Test Subjects, and Cake in the chosen color. Players construct the gameboard by randomly discarding three Test Chambers and then assembling three staggered rows of Test Chambers, made up of 5 Panels each. The edge on the left is considered the new edge and the right is the old edge. Test Subjects are placed by each player, one in top row, one on the bottom, and two in the middle, all on the new edge. Portal tokens are placed on the top and bottom rows at the old edge of the laboratory and Aperture cards are set out. Gameplay is ready to begin.

Each turn, a player takes three actions with one optional action. The optional is first – playing an Aperture card if she has one available. Aperture cards give the player an action and then are flipped and discarded, providing an effect for all players.

The current Player then activates a Test Chamber on the old (right side) edge by placing the GLaDOS standee on it. If there are Test Subjects on the Test Chamber, they all die horrible deaths, but before they do, the player with the majority of Test Subjects receives rewards as noted on the tile. If there was Cake on the activated Test Chamber, it is placed in the incinerator. Test Subjects are returned to their respective players.

The activated Test Chamber is recycled by flipping the tile and moving it to any of the three rows on the new edge. All rows must maintain a minimum of three Test Chambers, otherwise the tile can be placed on whichever row the player chooses. 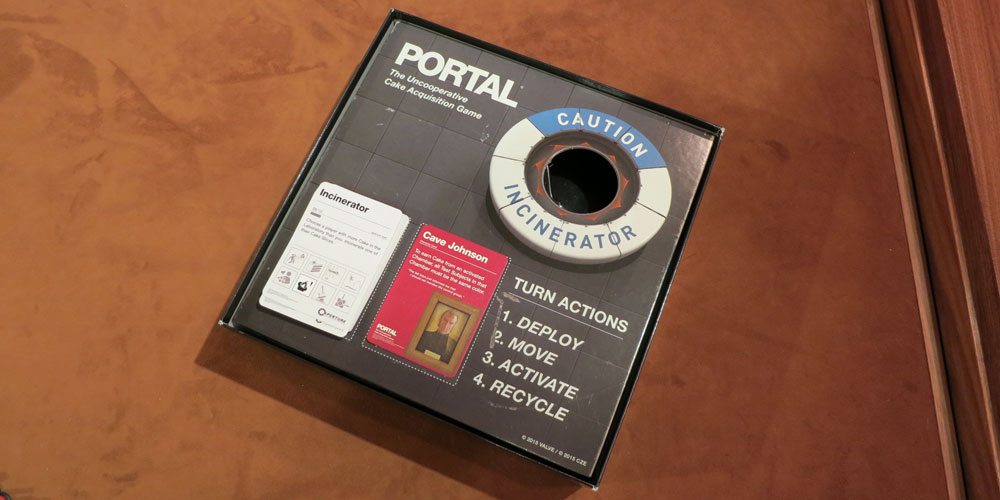 When playing an Aperture card, the player has the option of ignoring the text on the card and, instead, deploying her Portal Gun, which allows her to reassign the Portal tokens. Portal tokens act like, um, Portals, making distant Test Chambers adjacent for movement’s sake. Test Subjects, when moving, can each carry one slice of anyone’s Cake with them.

There is one additional special rule: when a Test Chamber is activated and recycled, any Portals, Companion Cube, or Turret moves to the new Test Chamber on the left edge.

Gameplay continues until one of two conditions occurs. If a player has all 8 slices of her Cake incinerated or if a player has no Test Subjects on the board, the game ends. The player with the most Cake in play (on the board and not incinerated) wins. 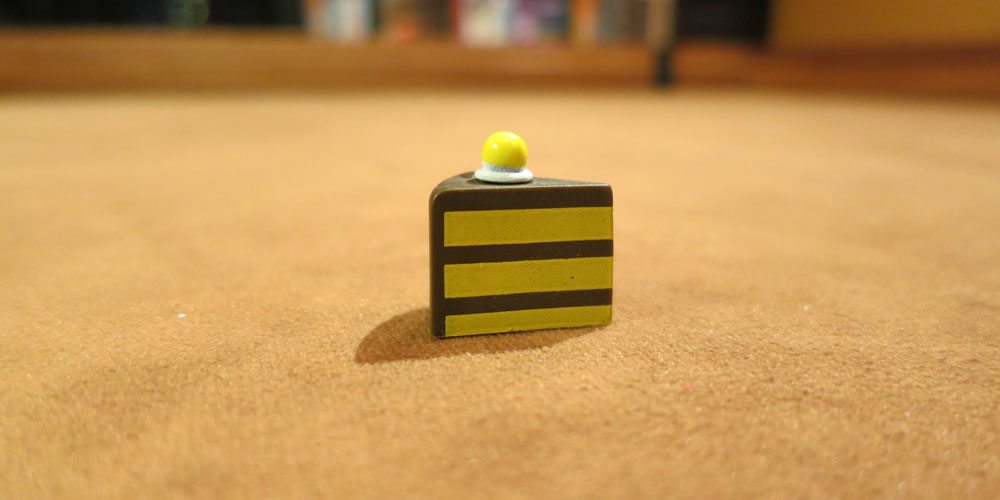 When it comes to licensed games, I really feel like their successes (and fun factors) are hit or miss. Some licensed property games feel like most of the game’s budget was spent on licensing, rather than game design. Happily, I can report that Portal is a hit. Not only does it do a good job of carrying over many of the elements of the video game to cardboard and capturing the essence of Aperture Labs, it is actually a pretty fun game too.

Like a good Eurogame, there’s always something to do and developing a good strategy can win this game for you. However, there’s also a very high likelihood of conflict as players try to destroy opposing Test Subjects and incinerate Cake.

Portal is simple to teach and to learn and gameplay moves pretty rapidly. Thanks to the double-sided Test Chambers (not bedchambers), the game sets up differently almost every time. While the gameplay is a bit repetitive — players commit to the same actions each turn — the Aperture cards provide some unpredictability and challenge when played. To complicate matters further, once the Aperture card is played, the Character card grants an effect to all players, so a player must really consider the benefit of both sides before playing a card.

Because the game ends when one player is without any Test Subjects on the board, players must keep an eye on their charges and make sure all of their lab rats don’t fall off in one turn. That is, unless you lead with the most Cake. Also, don’t forget that you can carry your opponent’s Cake to the incinerator as you sacrifice your own Test Subjects.

The game plays really well at 2 or 3 players but shines at 4 because the challenge is greater at this level.There are more Test Subjects, more Cake, and more that happens between your turns; four players requires altogether new strategies.

Portal also comes with one of the best tiebreakers that I’ve ever come across: if, at the end of gameplay, two players are tied, the two tied players may appeal their cases to other players (and anyone else nearby) in 10 words or less. None of the ten words may include the letter ‘E’.

I really enjoyed how the packaging and the instruction manual did a really good job of emulating the language and atmosphere that players of the video game will be familiar with. Cryptozoic Vice President of Creative, Adam Sblendorio, told me at Gen Con this summer that Valve played an important role in making sure that the board game was a worthy partner for the video game.

There’s enough replayability in Portal to keep you testing for quite some time and the game requires enough strategy that it will be a long time before it gets old. It is a really good time (a triumph, I dare say), as long as you don’t mind conflict, and one exponentially enhanced by quoting GLaDOS, Wheatley, Cave Johnson, and the Turrets while playing. If you’re a fan of Portal, this is a must buy … remember, testing is the future, and the future starts with you.

Aperture Science would like to thank you for cooperating in this uncooperative testing initiative. The most effective color for science has been duly noted and assigned to all remaining Test Subjects as their new favorite color.