Ray: When this monthly series of graphic novels were announced, no one was quite sure what to make of them—were they just tributes to heroes who were dead and gone? After the first issue of Dark Crisis things are a lot clearer—these stories of worlds that never were are artificial constructs that the heroes are trapped in by Pariah, caught between life and death as he uses their energy for nefarious purposes. So we start with Superman, as he gets to experience a world where Jon Kent grew up the way he was supposed to, and Superman and Lois get to guide him through his teen years to becoming a hero in his own right. No surprise given King’s last foray into the Superman family, it’s absolutely brilliant.

Every time King has worked with the more cosmic heroes of the DCU, he seems to follow up on one theme—space war is hell. Here, the story starts with Jon as a slightly rebellious but good kid—until he hears horrors in deep space courtesy of Darkseid. Unable to accept the restrictions heroes follow, it kicks off an extended period of tension between Jon and Clark that’s likely to be heartbreaking to any parent. Both sides mean well, but find themselves at odds. The story is told in years, with Jon getting a little older and a little more determined in each segment, as he grows into a different kind of hero than the one we see today. It’s a shame this segment is only around 20 pages, because King hits it out of the park.

The Aquaman segment is strong as well, as Arthur gets to enjoy an Atlantis where everything went right. He and Manta have put their enmity aside, Andy has grown into a young woman in a relationship with the always-entertaining Kid Quick, Arthur is happily married to Mera—and even his parents are alive, and about to renew their vows in Atlantis. But when a new villain crashes the party, the entire Aquafamily springs into action to neutralize them. It’s perfect—a little too perfect, and just like Superman, he can tell. If the rest of the one-shots are on this level, they may just outshine the main mini. 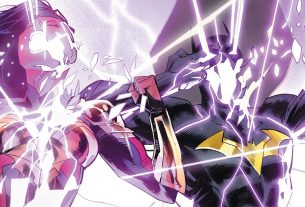