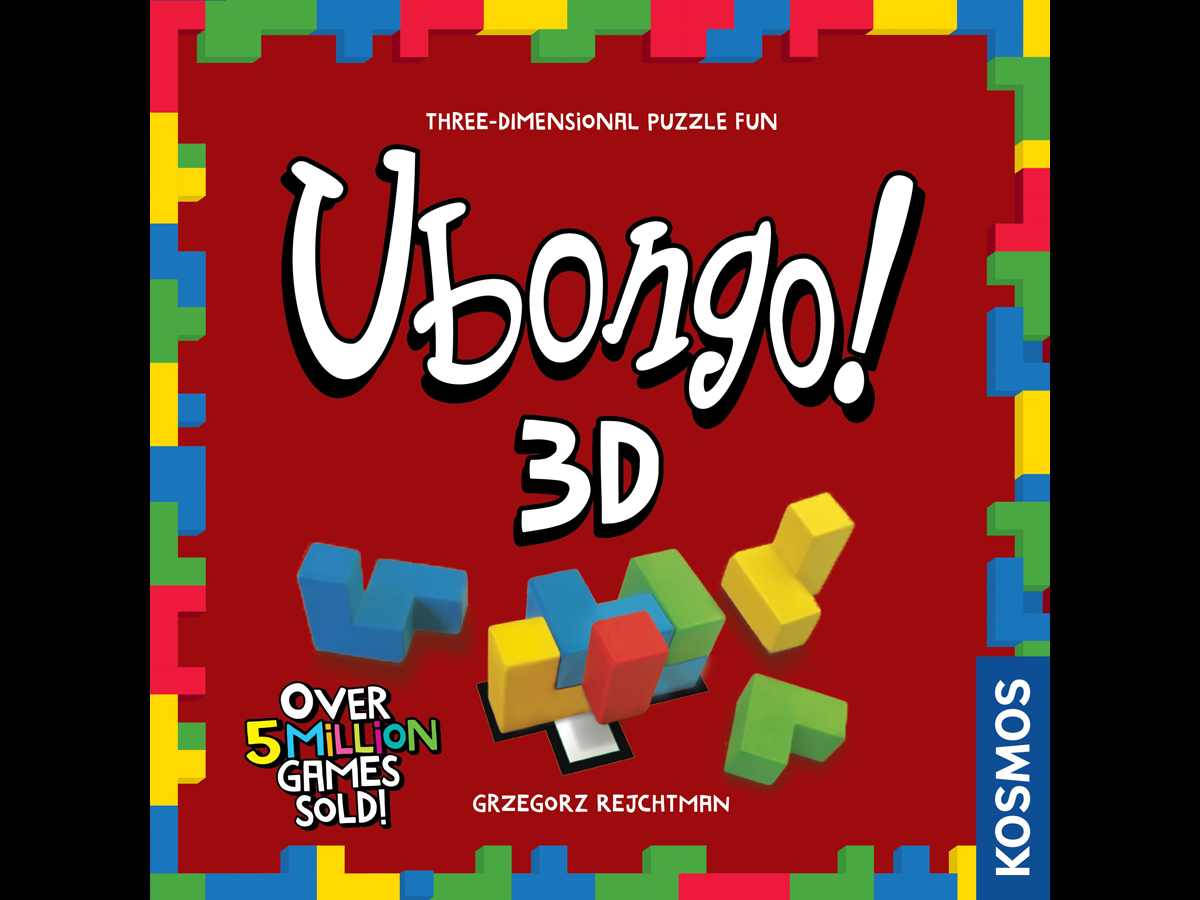 Race to arrange these irregular blocks to complete puzzles!

What Is Ubongo 3D?

Ubongo 3D is a spatial puzzle game for 1 to 4 players, ages 8 and up, and takes about 25 minutes to play. It was first published in 2009, but is still being reprinted. Ubongo 3D retails for $42.95 and is available directly from Thames & Kosmos.

Ubongo 3D was designed by Grzegorz Rejchtman and published by KOSMOS, with art by Bernd Wagenfeld, Karl Homes, and Nicolas Neubauer.

The puzzle pieces are plastic blocks in various shapes, like polyominoes but some bend in three dimensions instead of just two. There are 8 unique shapes, divided into 4 colors—though the colors are primarily to help you identify the pieces and aren’t important for the puzzle assembly itself. The pieces are a nice size, easy to handle and with a bit of heft to them. The plastic has a matte finish so they aren’t too slippery.

The puzzle cards are large and double-sided, with 4 different difficulty levels in total. Each card shows an outline of a shape, and has 2 to 6 sets of pieces listed along the side, indicating which pieces to use while assembling the puzzles. The outlines are the actual size of the puzzle pieces so that you build directly on the cards.

The rest of the components are pretty standard: little plastic gems, a standard wooden die, and a small plastic sand timer. The cloth bag is for the gems and has a good drawstring that keeps the bag shut for storage.

How to Play Ubongo 3D

The goal of the game is to score the most points by solving puzzles quickly.

Give each player a set of puzzle pieces and 9 puzzle boards; everyone can choose which difficulty level to use. Set your stack of cards face-down.

Put 9 sapphires and 9 amber gems on the table, forming two rows, and put the rest of the gems in the bag.

The game takes place over 9 rounds. At the beginning of the round, each player turns over their top puzzle card, and one player rolls the die. Compare the die roll to the charts on your puzzle card to find which pieces you will use for this round.

Then turn the timer over, and everyone simultaneously attempts to solve their puzzle. To solve your puzzle, you must use your pieces so that it fills the outline exactly and is 2 levels high throughout.

If nobody solves a puzzle before the timer runs out, flip it again (but only once per round). If nobody finishes by the end of the second timer, the round ends and nobody claims any gems. (If a sapphire or amber was not collected for the round, return them to the bag.)

The game ends after the end of 9 rounds—the sapphires and ambers on the table help track the rounds, as do the number of cards each player has.

Count up your score:

The highest score wins. If there’s a tie, the tied players each take a puzzle board and whoever solves theirs first wins the game.

Why You Should Play Ubongo 3D

Ubongo 3D is, as you may have guessed from the title, a spin-off of a 2-dimensional game called Ubongo that involves fitting together polyomino tiles. It’s all about figuring out spatial puzzles as quickly as possible, which happens to be something I really enjoy. I particularly like the way that the 3D blocks work, because several of the blocks have a piece sticking out in an odd direction, and figuring out how to piece it all together and make it fit within the outline on your puzzle card can be a real challenge, even without the time pressure.

For me, what makes Ubongo 3D great is the puzzles themselves: played alone, it reminds me of any number of solo logic puzzles (for instance, those made by Thinkfun) that my kids and I have enjoyed. That’s actually how I’ve mostly played with it, even with other people: we just sit around the table and work on solving cards, sometimes racing and sometimes not. If somebody can’t figure out a card at all, we pass it around and see if anyone else can figure it out.

I also really like the way that each puzzle can be solved using multiple sets of pieces. Even if you happened to draw a card that you’ve done before, chances are that (1) you may get a different set of pieces and (2) you probably won’t remember exactly how you did it last time, anyway. The four different difficulties also make it great for playing with people with different levels of experience, leveling out the playing field a bit so everyone has a chance to compete.

Where the game is a little strange, in my opinion, is the scoring. It makes sense for a race game that the player who finishes first gets the most points, right? But because of the random draw, things can get weird. First place is guaranteed 3 points (sapphire) plus one more gem. Second place is guaranteed 1 point (amber) plus one more gem. Anyone else who finishes will get between 1 and 4 points. Since that draw from the bag is random, though, I’ve seen the last place get more points than the second place player. And if you just keep drawing amber gems and somebody else draws a few rubies, it can be frustrating that you were pretty fast but somebody else is still scoring more than you.

I think to some extent the random draw is also meant to level out the playing field a little, giving slower players a chance to compete, but in that case why have it be a race at all? The timer is short enough that we quite often needed the second-chance round to complete puzzles, and even then there were often players who didn’t complete a puzzle at all. It can feel strange to set aside a puzzle you didn’t complete and move on to the next one.

For my part, I think Ubongo 3D is a fantastic puzzle, and I’ve really enjoyed it as a group activity and even as a simple race against other players, but I don’t really see the need for the gems and scoring, which feel like they needlessly complicate things. If you like figuring out spatial puzzles, then just play with the puzzles, which are excellent! I also like that it’s a game I’ve been able to share both with my kids and my parents, who have all enjoyed the challenge.

Get more info about Ubongo 3D or order a copy here at Thames & Kosmos’ website.