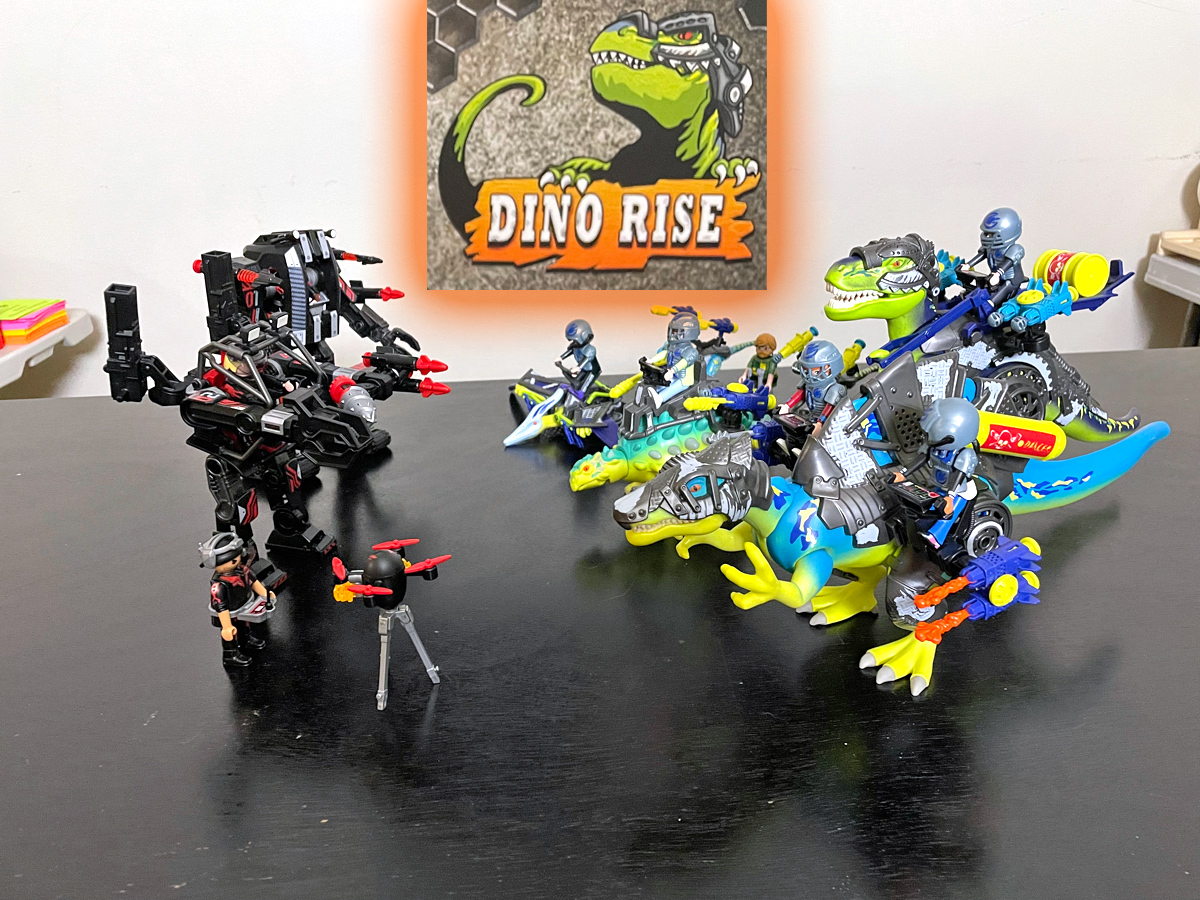 Dinosaurs, drones, and mechs, oh my! Playmobil has introduced a new original line of toys that combine together dinosaurs, armor, and mechs called Dino Rise. If you’re a fan of any of these things or have a nostalgic memory of Dino-Riders from the ’80s, you’re going to love this new line! 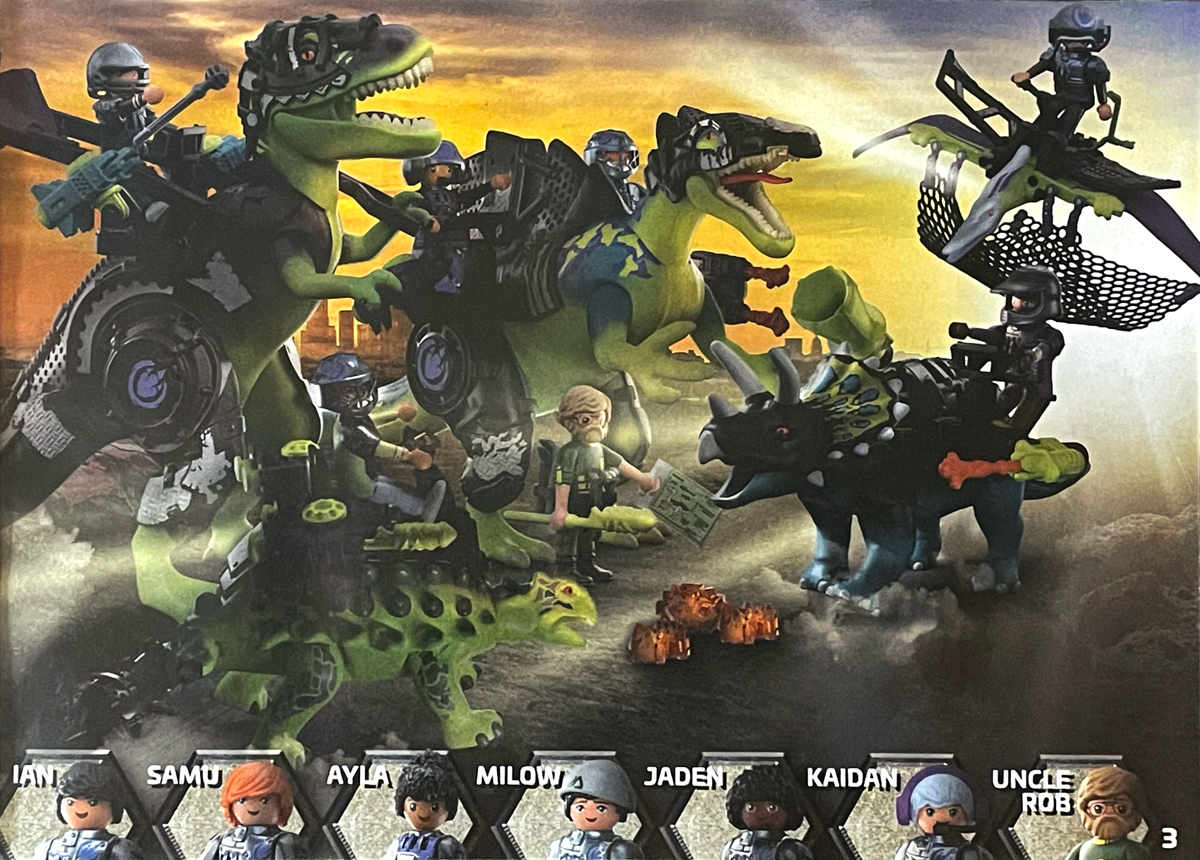 Dino Rise is a Playmobil original IP with a full backstory and cast of characters! Uncle Rob leads a team of courageous youngsters in an effort to save the dinosaurs against the bad guys who use technology (drones, mechs, etc) to try to capture and enslave the dinosaurs. The team builds armor and weapons to gear up the dinosaurs to help in the fight against evil! The diverse cast of characters is also a very welcome leap forward in representation for Playmobil. 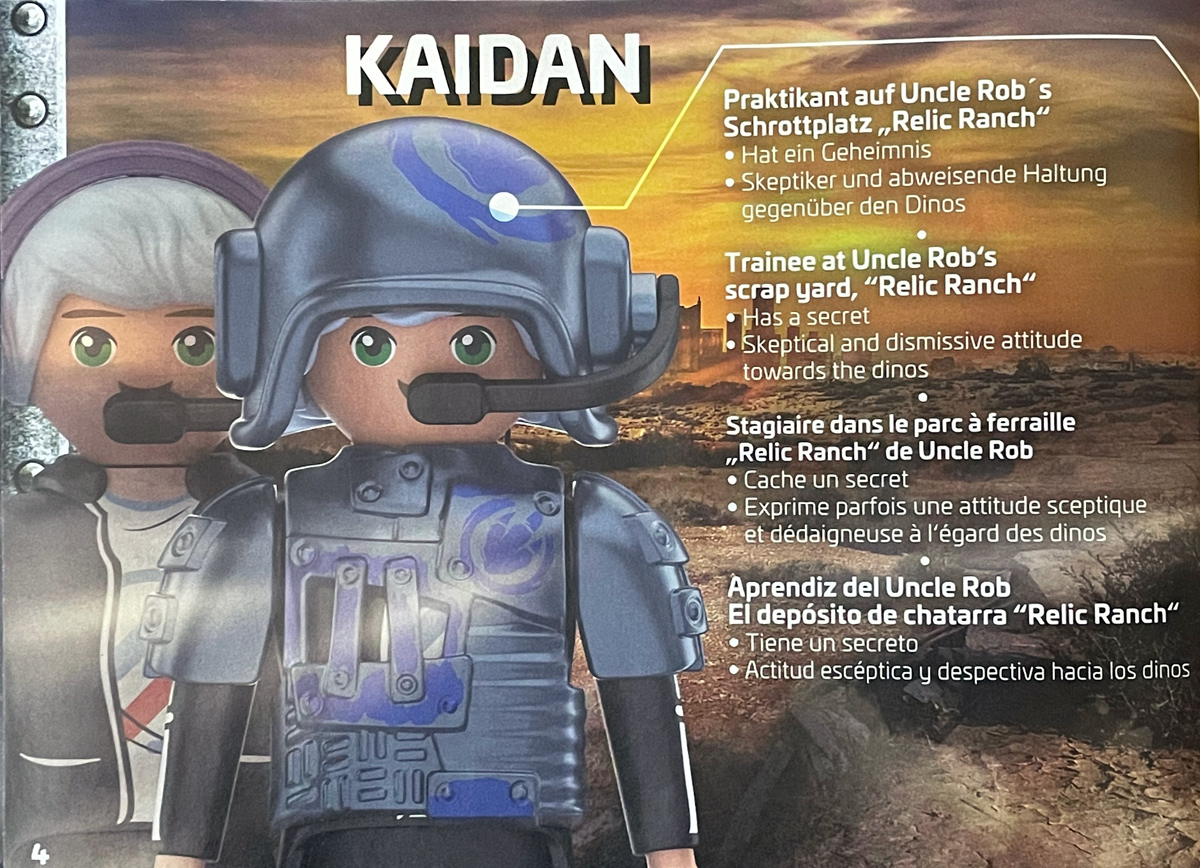 Every character has a bio in their corresponding instruction booklet, along with a profile of their dinosaur partner. 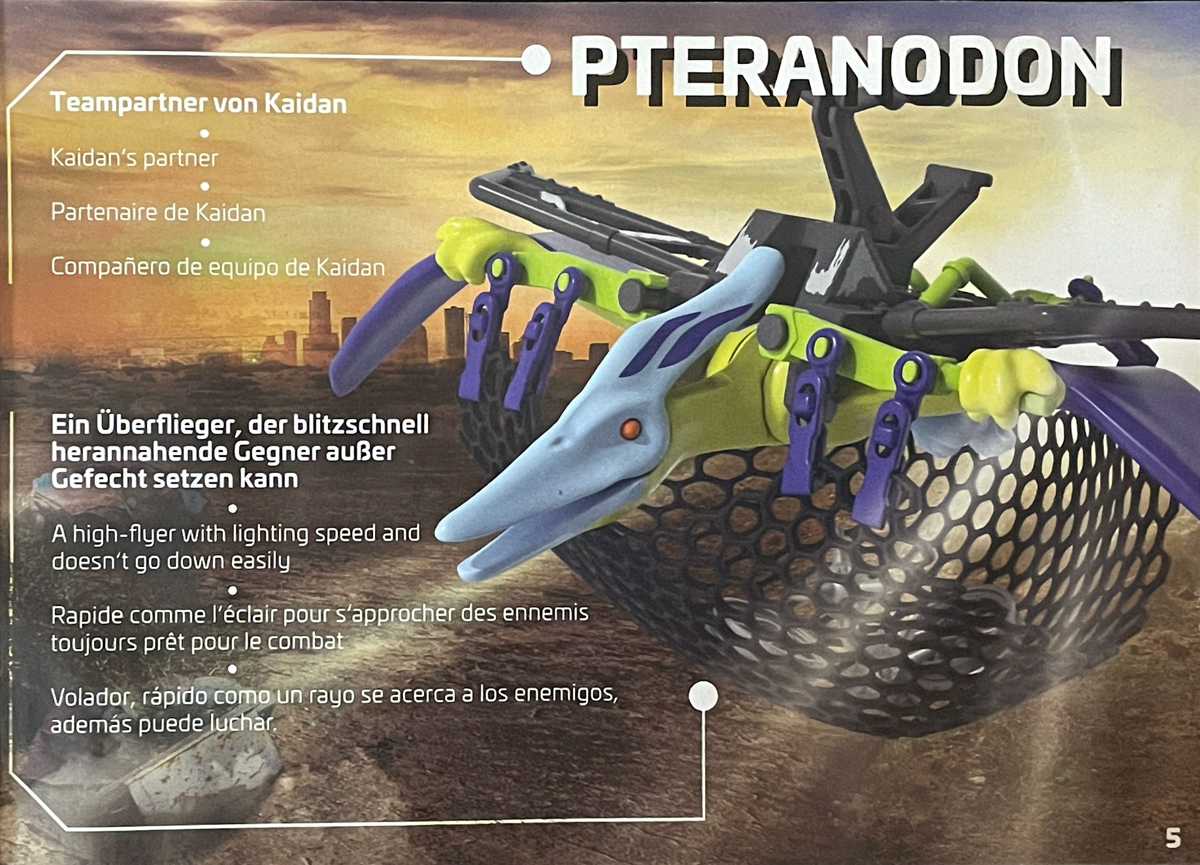 All of the stories and bios are in German, English, French, and Spanish. While the details are a little thin because of the space used for multiple languages, there are definitely enough bones to potentially build a movie or series off of—something our kids would absolutely love. Now on to the set specific details! 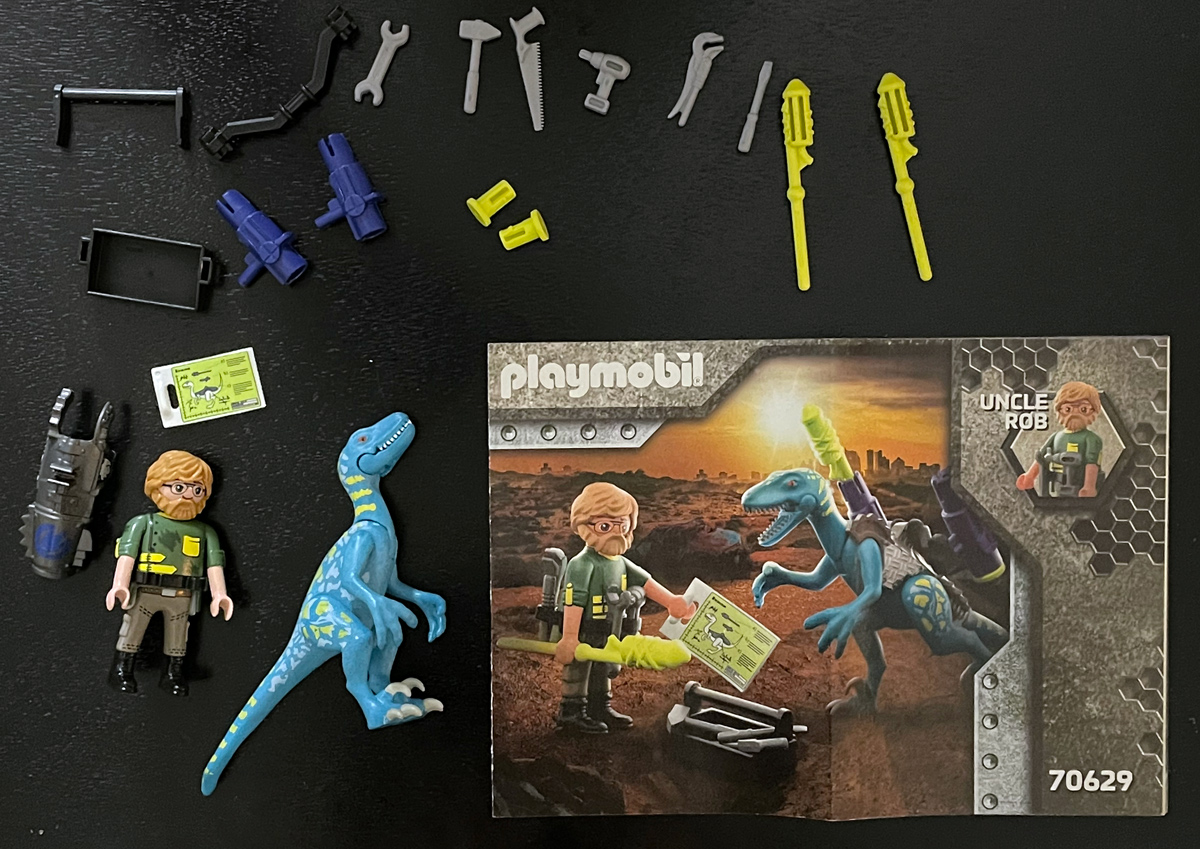 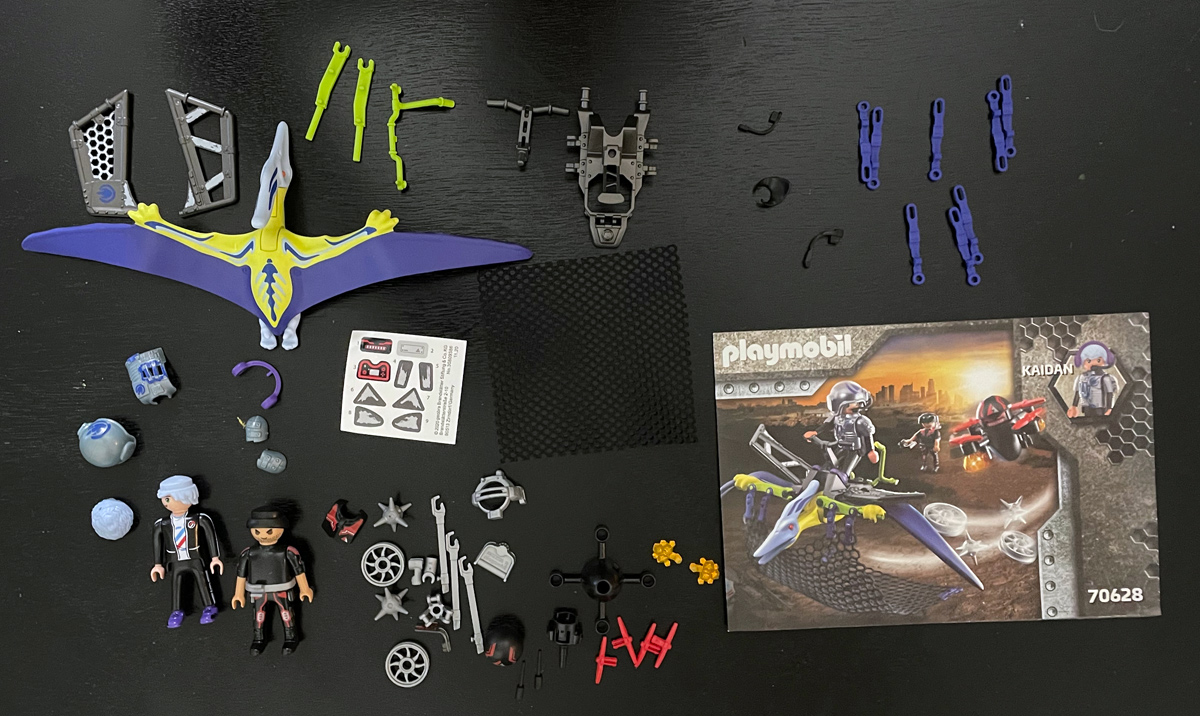 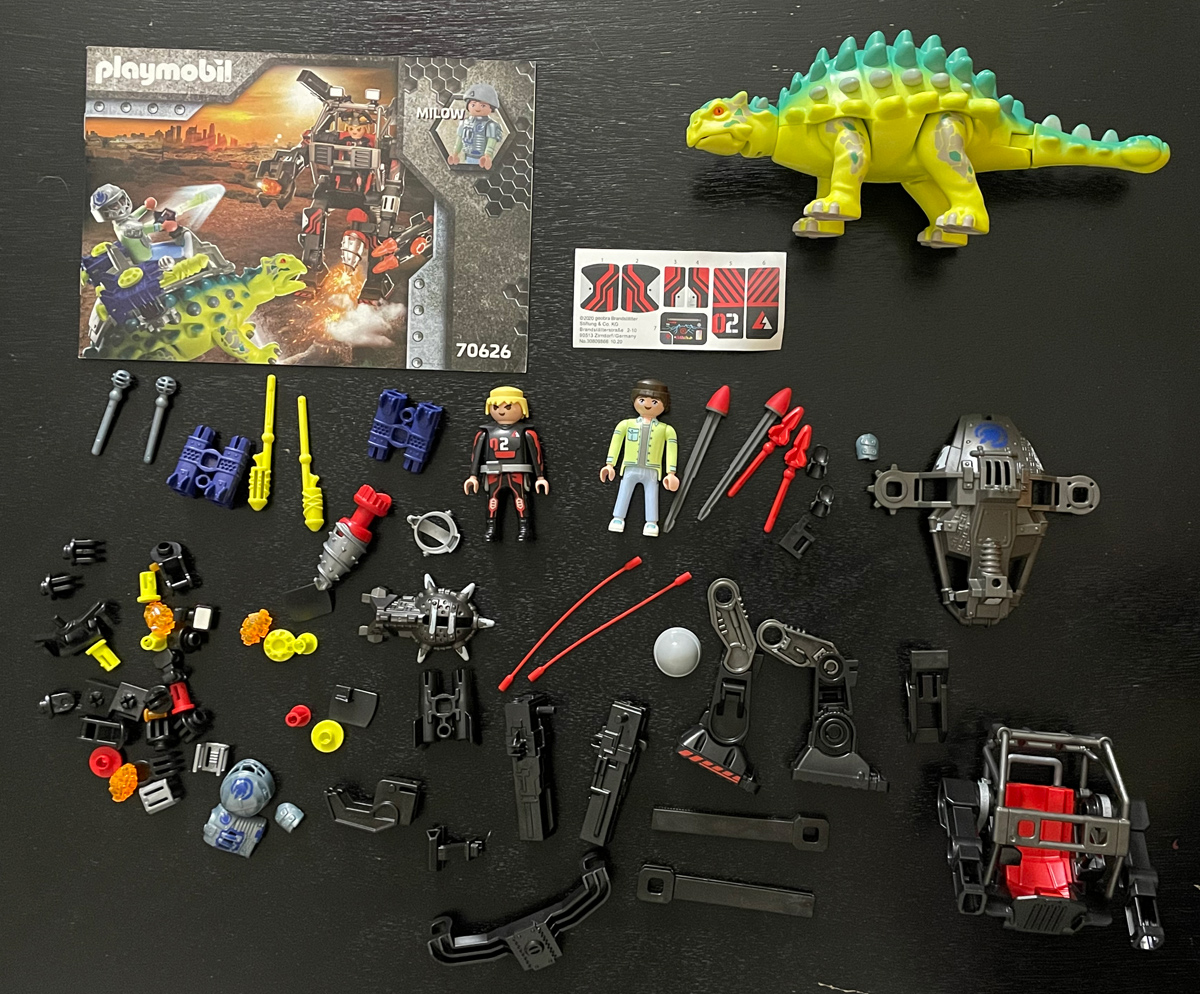 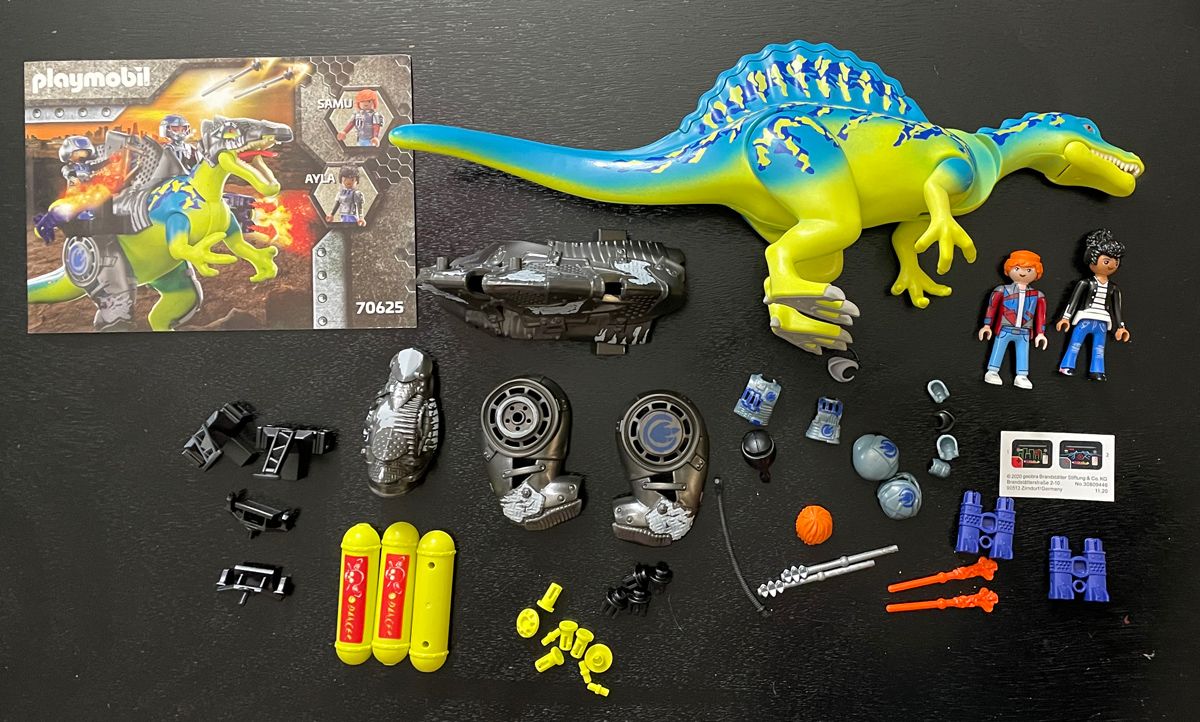 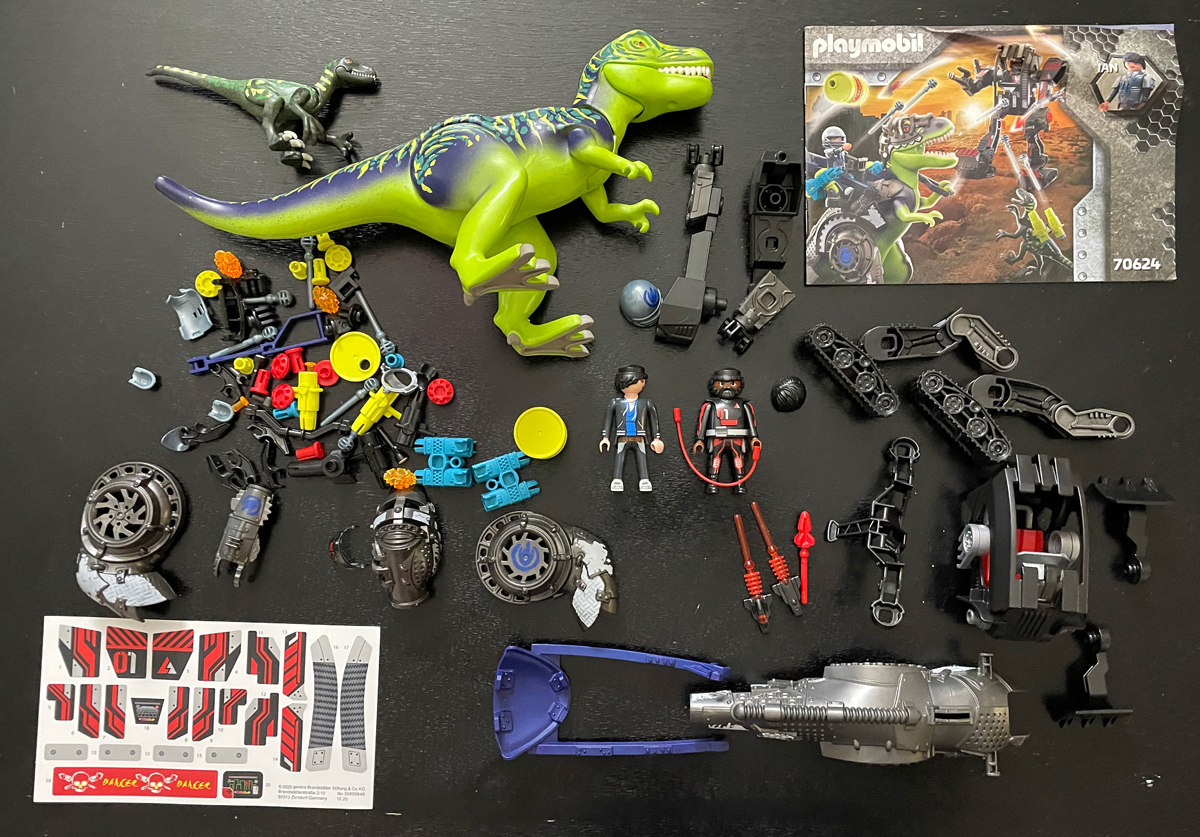 On a scale of 1-5, all of these sets are about a 2 as far as ease of assembly goes. All of the dino armor snaps on easily, and the remaining parts are mostly accessories. The trickiest parts were assembling the 2 mechs in the T-Rex and Sachania sets, which we’d put at a 4 difficulty, but mainly due to the arms, which also happen to be one of the coolest features. Because the “controls” inside the mechs where the pilot sits also move with the arms, the mechanism that connects all of these together, while already pre-assembled and installed out of the box, are easy to accidentally pop out while attaching the mech arms, and they are not as easy to get back in and aligned as all of the rest of the assembly (these were the only things my son needed help with).

The only other tricky part of these sets, while technically not part of the build, is getting the net on the Pteranodon set to stay in place while loading its payload. It’s a precarious balance between ease of loading and ease of dropping the load, and once you get the hang of it, it isn’t too bad and works well, but it took a few tries to get it right. 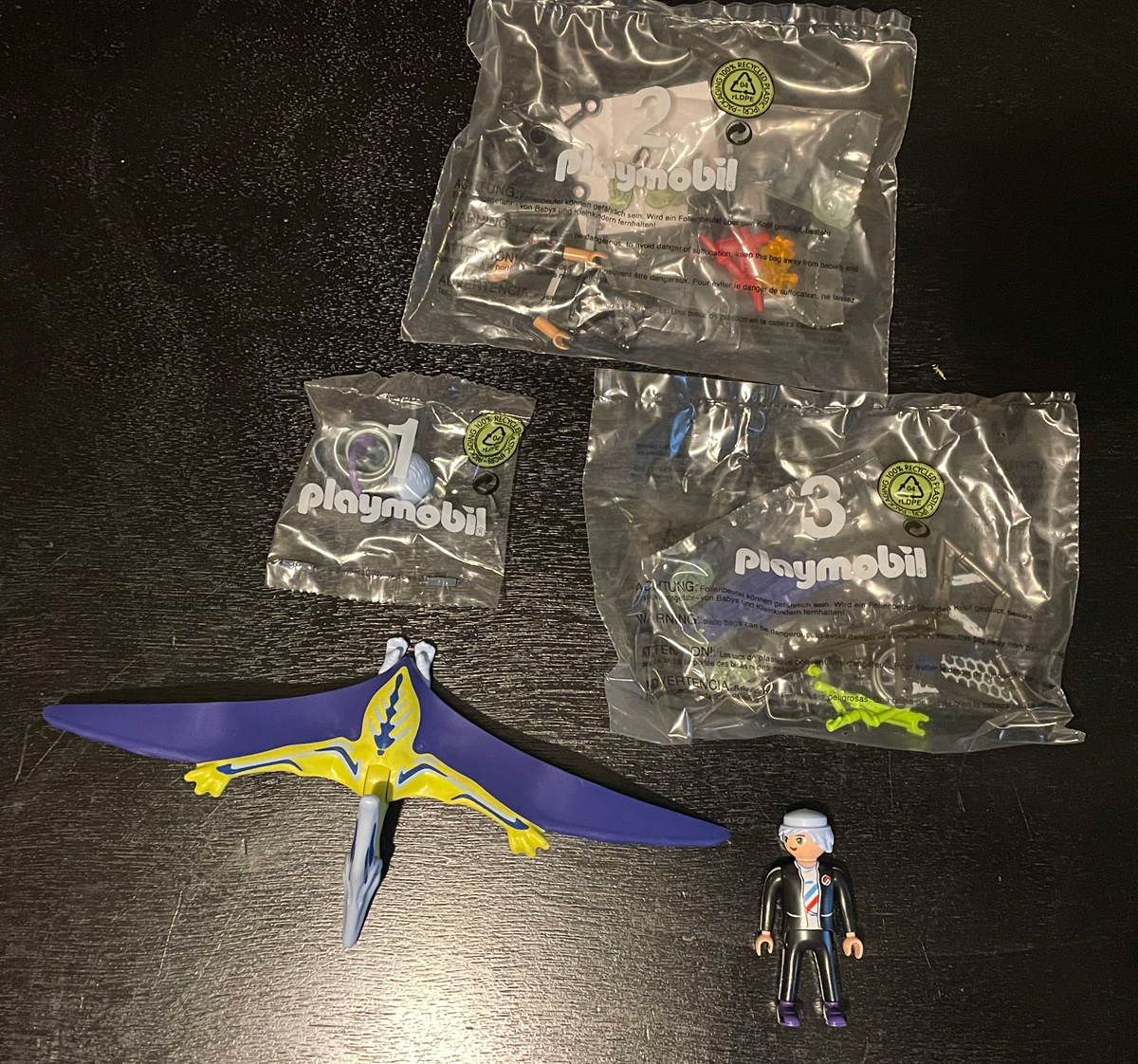 One new feature Playmobil has added to these sets that we haven’t seen before is numbered bags to go along with the instructions, similar to other toys that have multiple bags of parts and build instructions. This can definitely help speed up and ease the building process, especially with larger sets with more pieces. 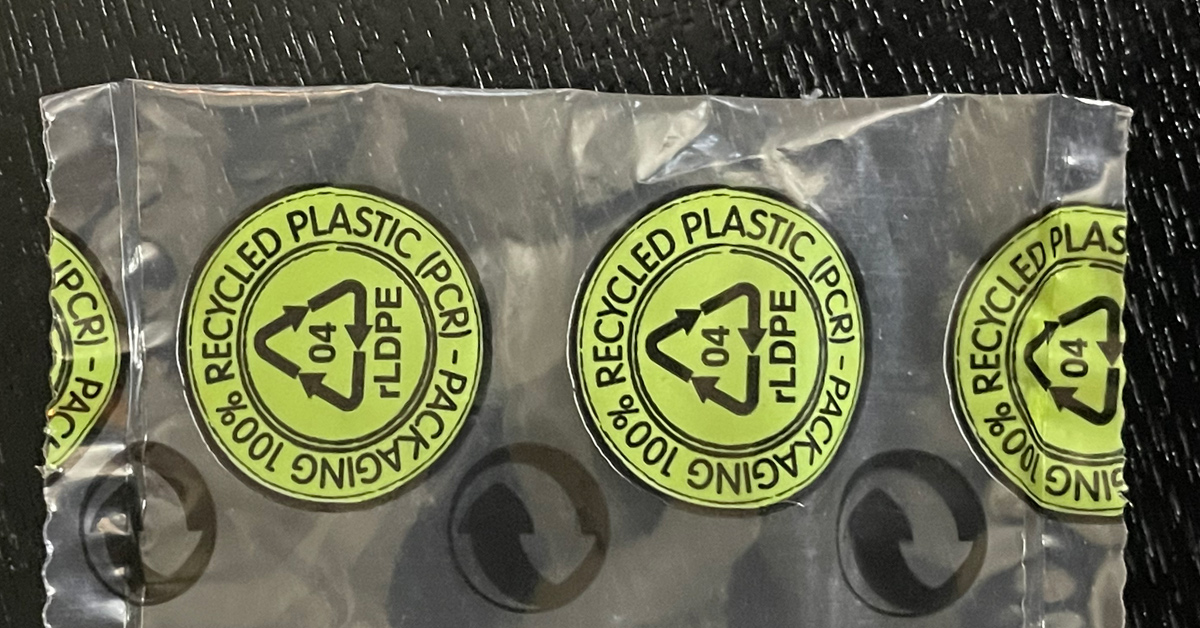 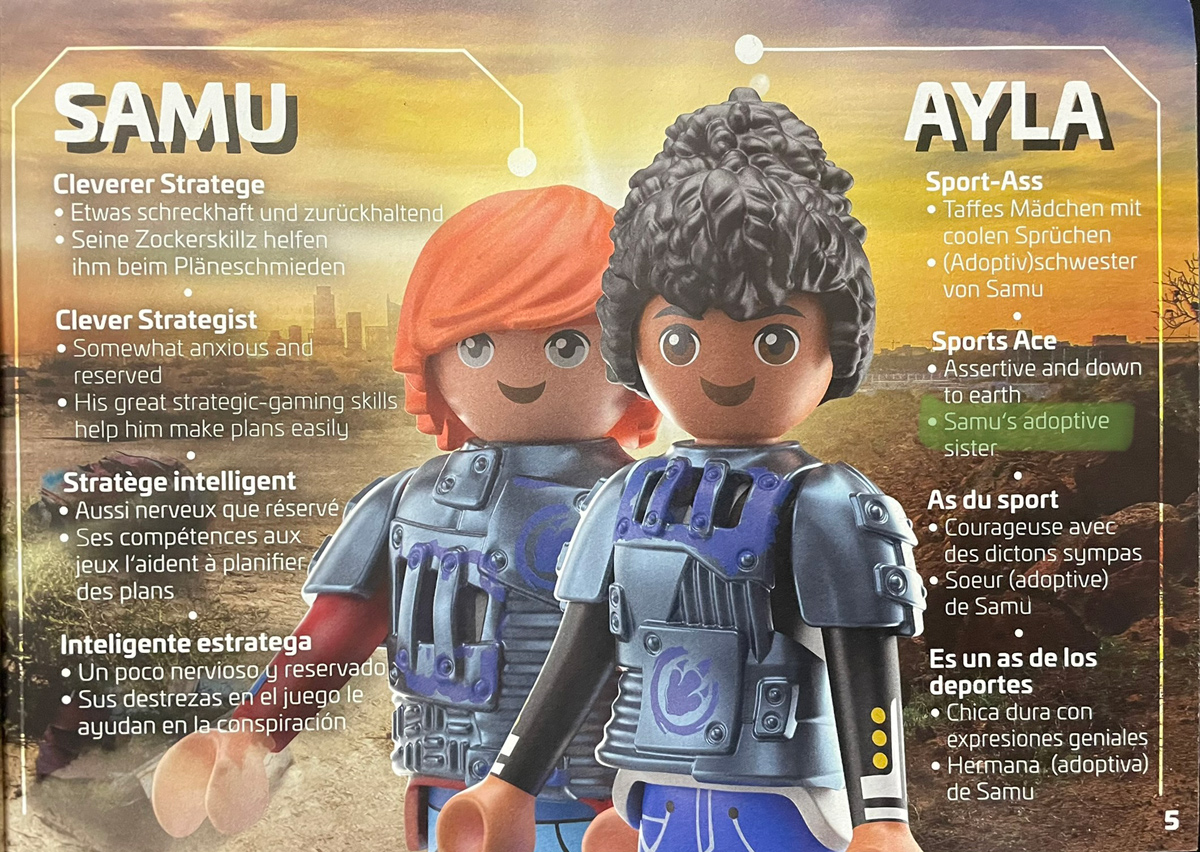 I briefly touched on the representation of the characters and figures in this new line, but wanted to bring it up again a bit more in context. My kids are always picking which characters are most like them or represent them when playing, and before we’d even opened the boxes, they had decided that their closest analogs were Samu and Ayla. Imagine our surprise when we opened the set and discovered that not only did these characters look similar to them, but Samu is a somewhat reserved gamer (like my son) and Ayla is his adoptive sister (just like my daughter). These are tiny details that most folks will possibly never look at or pay attention to, but, by giving all of the characters these snippets of back story, it opens up a ton of possibilities for kids to see themselves in these characters and expand their creative play. 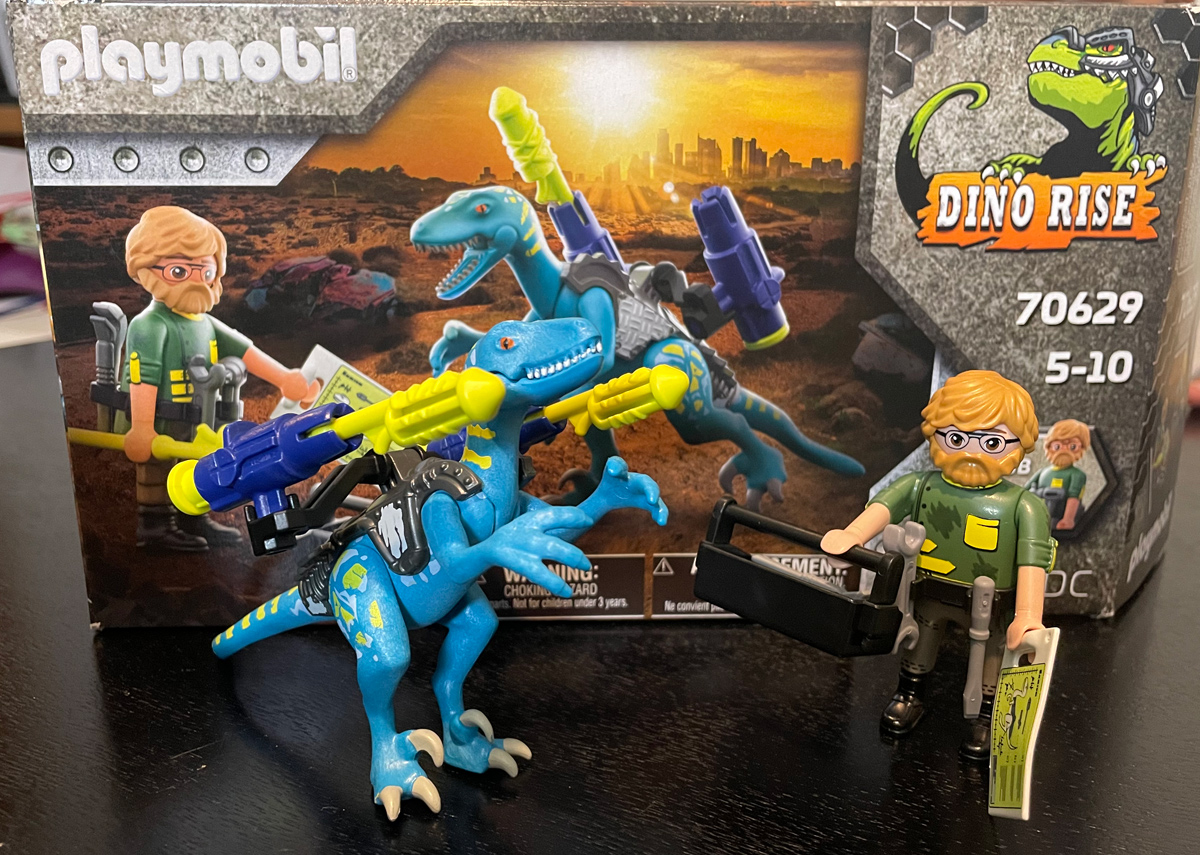 Speaking of analogs, the kids also immediately decided that I was Uncle Rob because of the beard. But our favorite part of this set is Uncle Rob’s toolbox and toolbelt. All of his tools can go onto the different slots on his belt (though not all of them at once), and his tools, along with the workshop mess on his shirt, make him quite a lot like me as well. The dino armor in this set, like all of those in this line, has projectile weapons. These can be a pro or con, depending on how you look at it. The bright side is that they are not spring-loaded projectiles but pressure snap ones, so they don’t accidentally fire off and how far or hard they shoot is mostly dependent on how strong the person firing them. 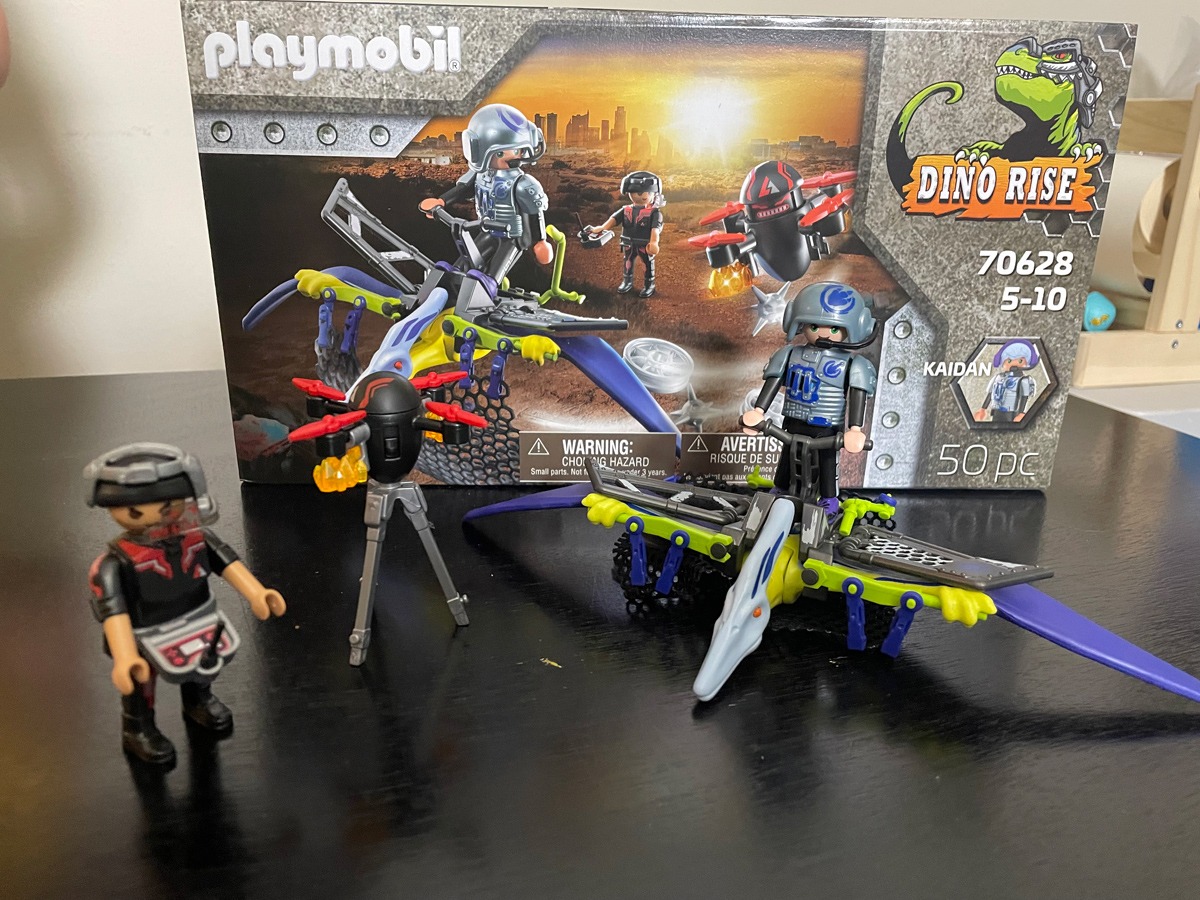 Pteranodons are my son’s favorite dinosaur, so this was his favorite set by far. The Pteranodon has a net that carries some junk (or whatever parts you want to fit in it) that can be dumped onto enemies with a lever. The bad guy in the set has a cool transparent HUD visor and belt-mounted remote control for his drone, which has really cool-looking clear orange exhaust pieces to make it look like ignited engines. 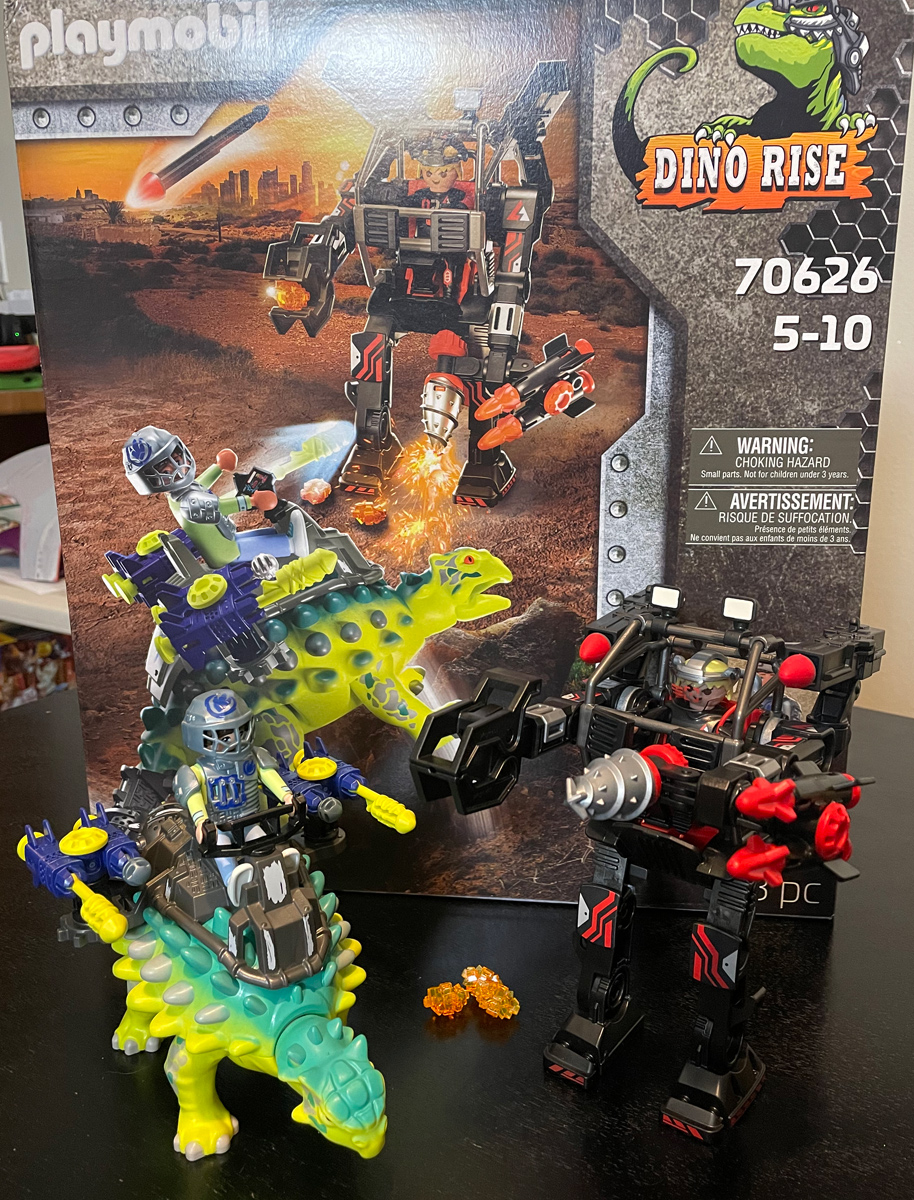 Obviously, the mech in this set is REALLY cool just by virtue of being a mech, but the way the arms move along with the pilot’s controls, the extending, functional claw arm, and spinning drill arm make it an extra cool mech! 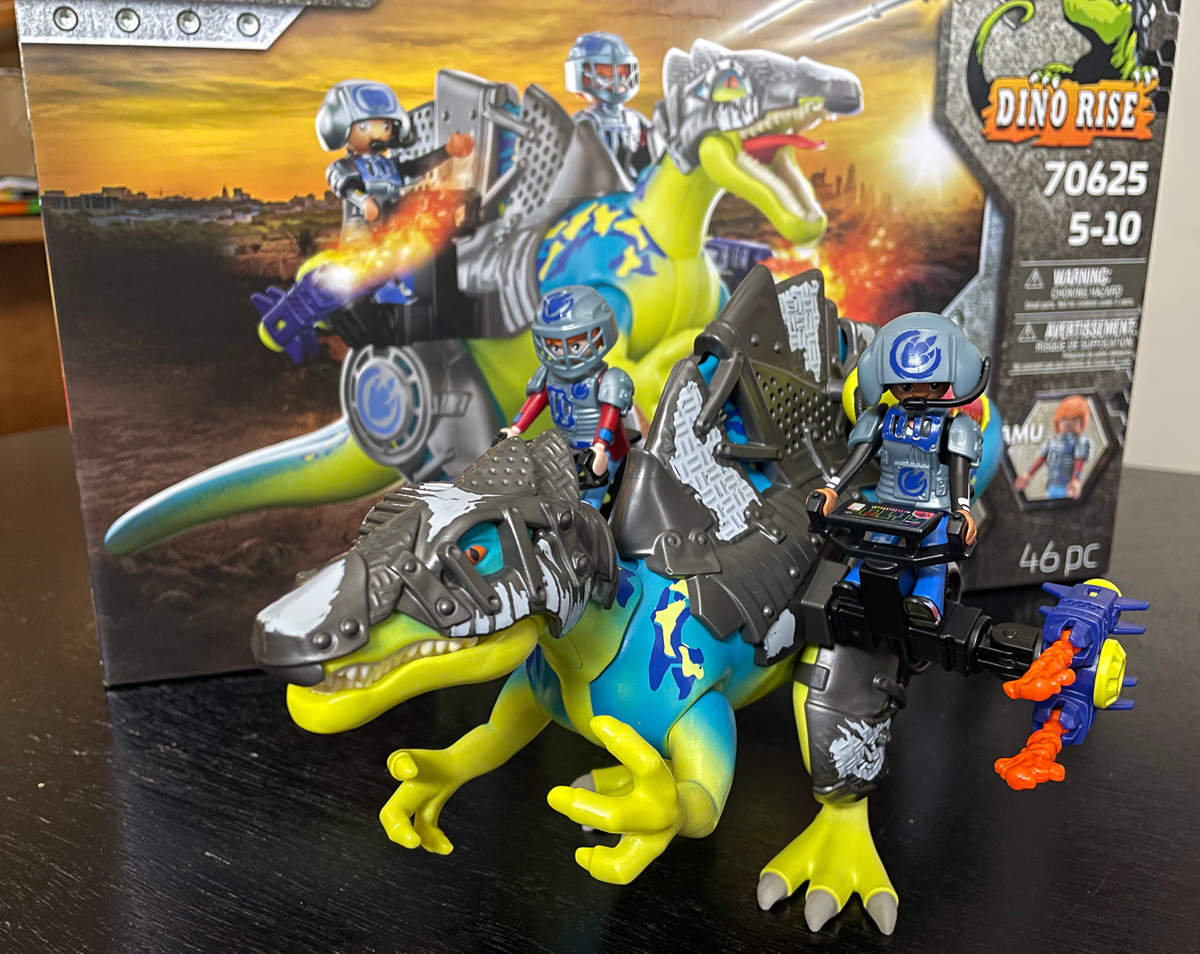 This set is my favorite, mainly because of the character backstory, but also because the siblings both ride and control the dino armaments as a team! I’m always on the lookout for toys and games that help reinforce the idea of teamwork. 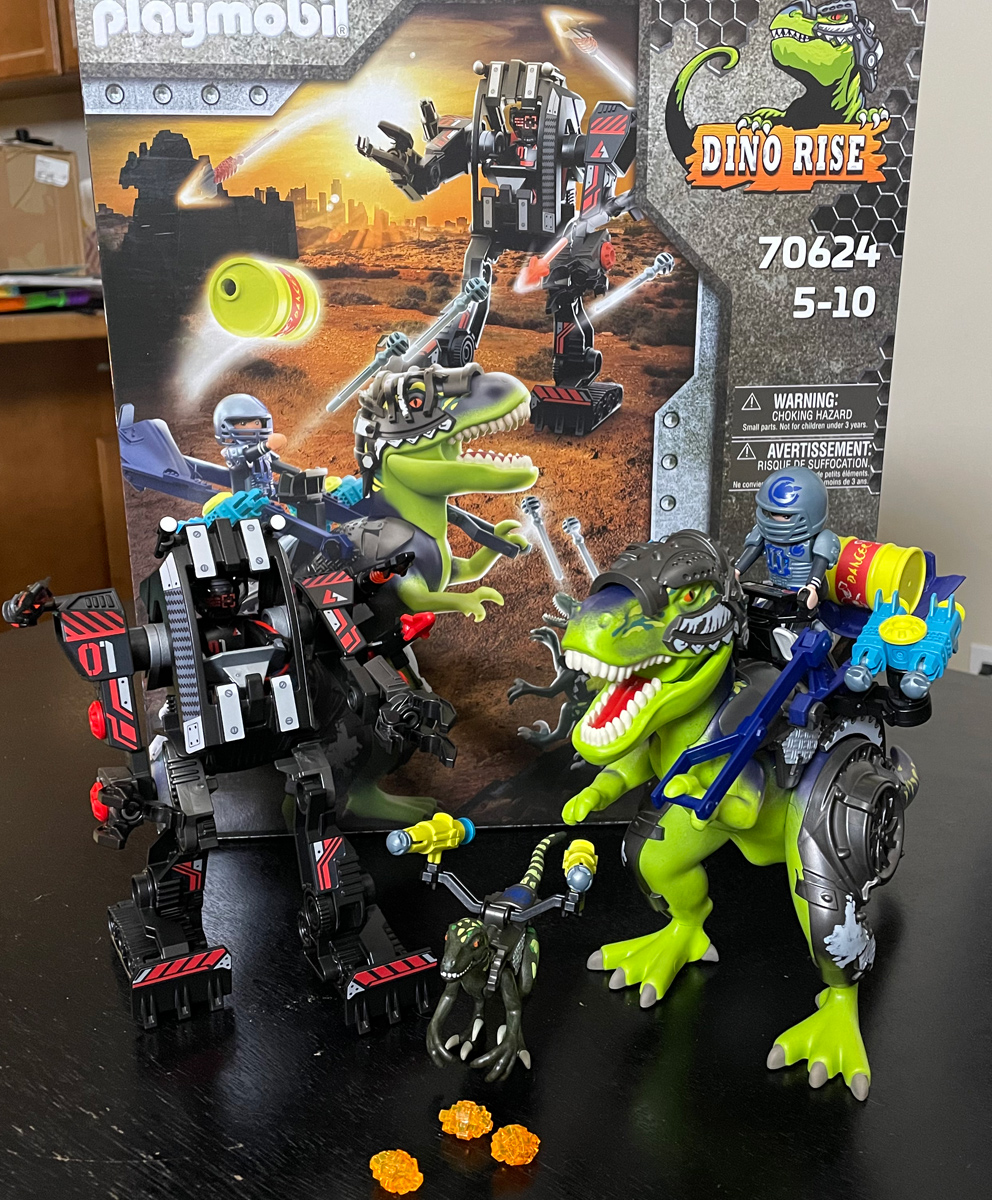 And lastly, the big one! The mech in this set shares the same arm/control mechanism as the other one but adds on really cool tank tread feet. While the treads themselves don’t actually move, the mechs big fingers do and are great for grabbing things. This set includes a second Deinonychus, and, of course, the biggest dinosaur—the T-Rex! Not only does the T-Rex have a bunch of cool armor like the rest of the dinos, but it also has a mechanism where the dinosaur itself can launch a barrel of toxic goo! Who said these tiny T-Rex arms were useless?

I have to say that in all my years of collecting and reviewing Playmobil toys, that these are easily my favorite of all the non-licensed sets, and are second only to the Back to the Future licensed sets. It’s really hard to compete with dinosaurs and mechs! 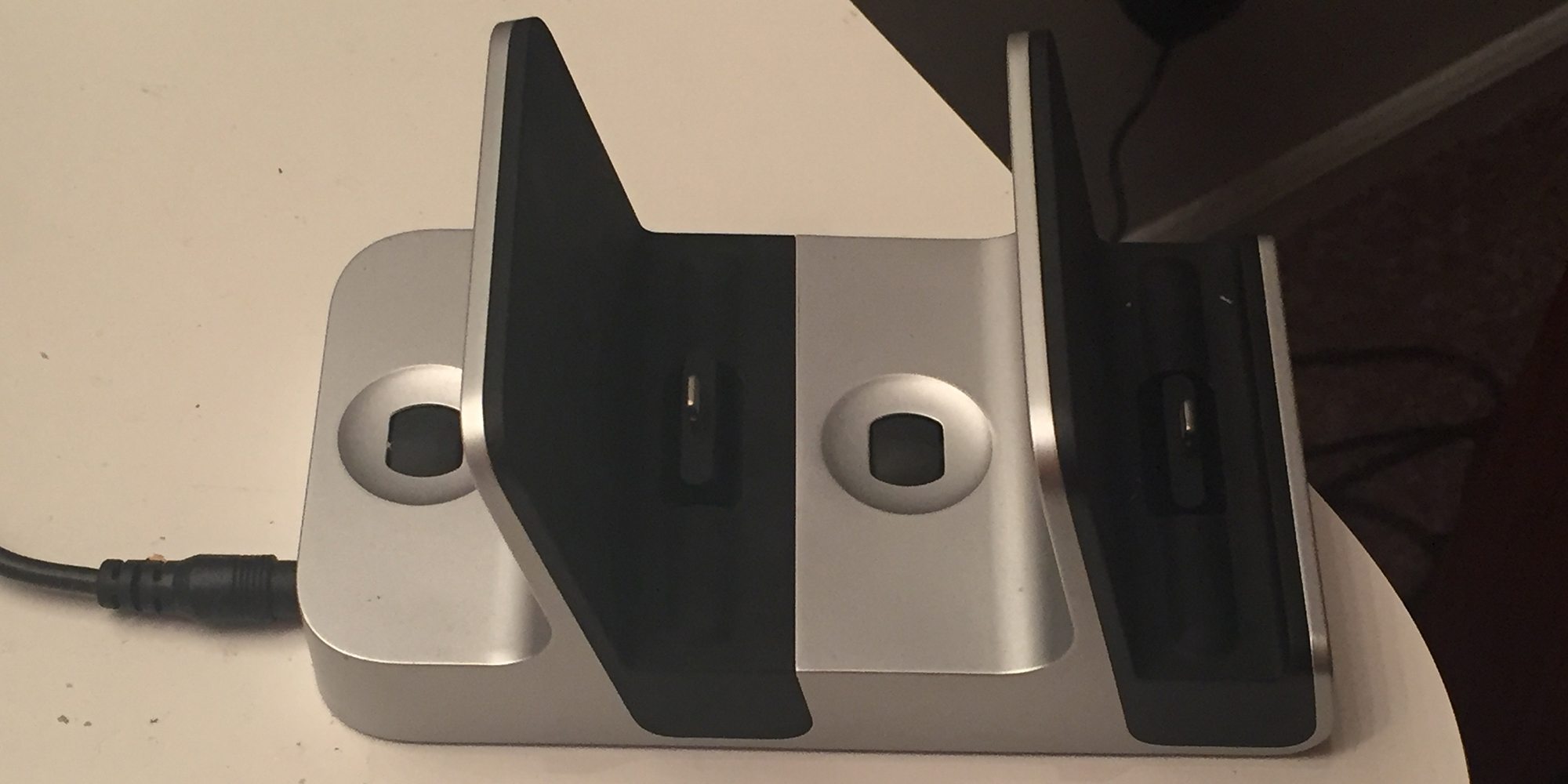 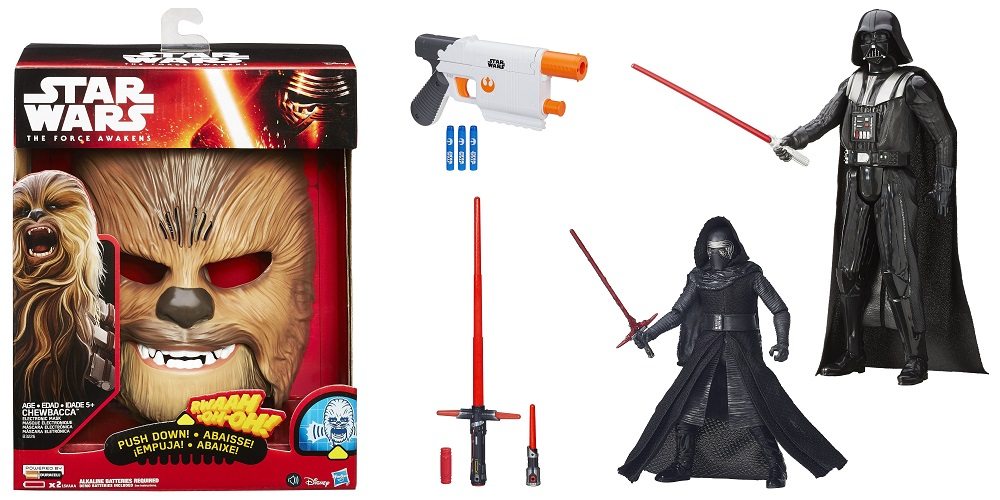