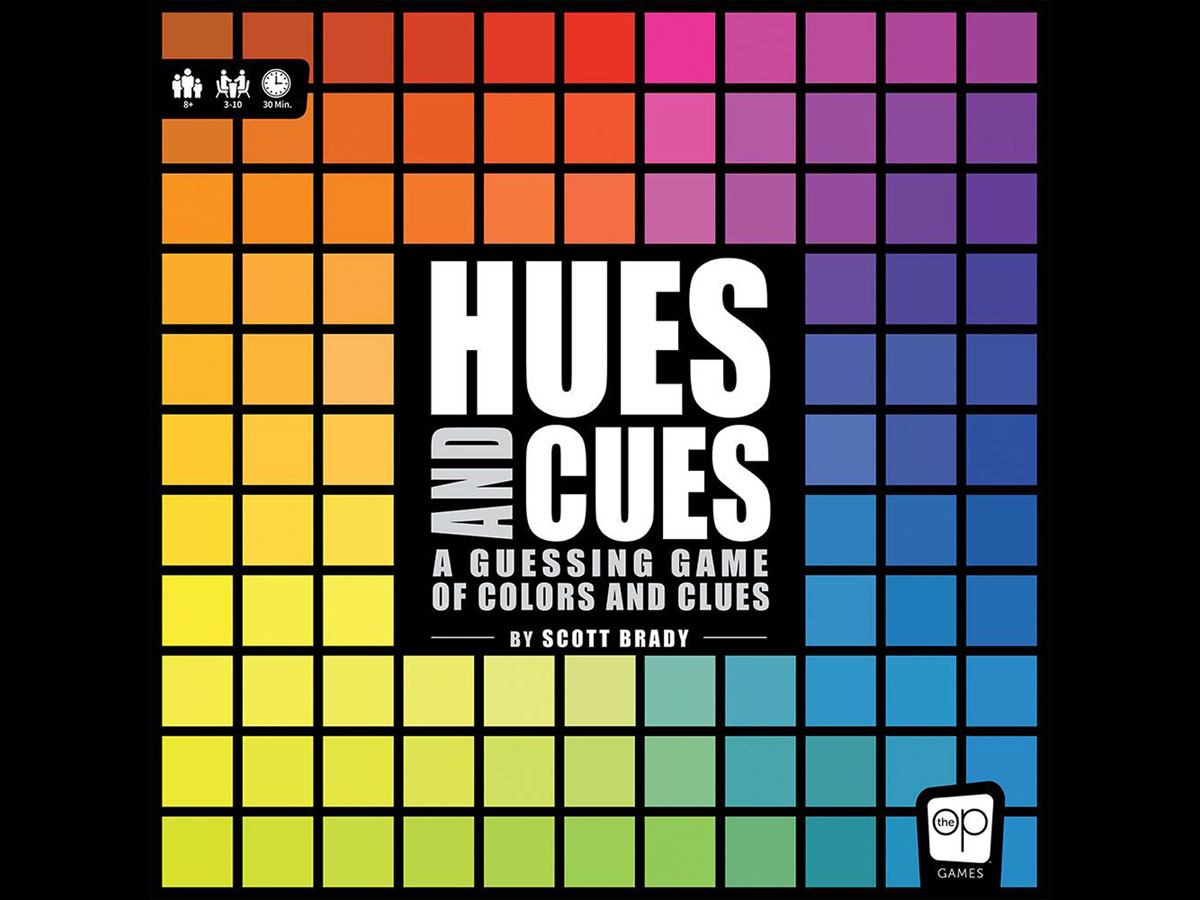 How well can you describe a particular shade of purple… with a single word?

What Is Hues and Cues?

Hues and Cues is a color-based guessing game for 3 to 10 players, ages 8 and up, and takes about 30 minutes to play. It retails for $24.99 and is available in stores and directly from The Op.

Hues and Cues was designed by Scott Brady and published by The Op.

The game board looks like a big color swatch palette from a graphics program, with 480 squares that make up a gradient that shifts in tiny increments from reds to oranges to yellows and so on. The grid is labeled with letters and numbers so you can identify specific squares. At the top of the board is a scoring track that goes up to 50 points. While I have not had the opportunity to play Hues & Cues with any color blind players myself, I’ve been informed that it does work well, so don’t write it off yet if you’re color blind!

The player pieces are small wooden cones of different colors. A few of them can be a little harder to tell apart depending on the lighting conditions.

Each color card has 4 of the color swatches on it, along with its coordinates so you can find it on the board.

The scoring frame is a simple cardboard frame that fits on a 3×3 area of the board. There are numbers printed on it to remind you of the point values for being inside or outside the frame.

How to Play Hues and Cues

You can download a copy of the rulebook here. Note: there are slightly different scoring rules for 3 players, which unfortunately were not included in this version of the rulebook.

The goal of the game is to score the most points by successfully giving and guessing cues about colors.

Set out the board, and give each player three pawns of their chosen color. One pawn is placed by the score track.

Shuffle the cards, and set them nearby with the scoring frame.

Players take turns being the “cue giver.” As cue giver, you draw a card, look at it, and pick one of the colors on the card. (Note: to speed things up, since it often takes time to come up with clues, I usually just deal everyone a card so they can also be planning ahead.)

There are, of course, rules about what types of words you may use in your cue—color words are prohibited, of course, and you also can’t give clues that refer to the position of the square on the board, or that refer to an object that is in the room with you.

Once everyone has placed their second guess, the cue giver places the scoring frame on the board, centered around the correct answer.

Note that if you have multiple pawns inside or along the frame, you score points for both of them. For example, in the photo above, both blue and white get 3 points (2 for the pawn inside, and 1 for the pawn outside).

The pawns and scoring frame are cleared from the board, and the next player becomes the cue giver.

With fewer players, the game ends when everyone has been cue giver twice; with more players, everyone will be cue giver once. The player with the highest score wins! (Ties go to the most recent cue giver.)

Why You Should Play Hues and Cues

Let’s dive into the question about color blindness first, because I know that’s something I was really curious about myself when I first saw this game. I’d seen that the designer had talked about testing it with color blind players and discussing it with ophthalmologists. My understanding is that the reason it works is because you’re asking players to compare a color on the board with, for instance, their memory of what a real-world object looks like. So if somebody says “strawberry,” a color blind player would look for a swatch on the board that’s closest to how a strawberry looks to them. I think there’s still a disadvantage for them: for instance, if you have red-green color blindness, presumably there are some squares that will look similar to how you see a red strawberry that for other players will look green and nothing like a strawberry. But, as I mentioned before, I haven’t actually gotten to try this with somebody with color blindness to dig into it more deeply.

I might categorize Hues and Cues as a party game, in the sense that it’s the sort of game that you can play with a big group and there’s not a lot of rules overhead to play. It’s easy to explain, and a lot of the fun factor is in the interactions with other players and seeing what sorts of clues they come up with, as well as how different everyone’s guesses can be sometimes. It’s also the sort of game where I’ve seen games just keep going past the one or two rounds stated in the rulebook because in the end, it’s not so much about the points as it is about the play.

The core of the game is trying to figure out what color things look like, and realizing that in many instances we probably don’t actually pay close enough attention. Sure, you have a rough idea what color Kermit the Frog is, right? But when you’re presented with a whole range of greens with subtle differences shifting from the yellower end to the bluer end, from light to dark, you realize (apologies in advance for this dad joke): it’s not easy seeing green.

When you’re the cue giver, you get to pick from one of four swatches on a card. Looking at the card itself, you might see an orange and think, Aha! This is exactly the color of a clementine orange. But then when you look at the entire board and find that swatch, it may look a bit different when surrounded by all the other oranges. It’s like that optical illusion, where the two grey squares are actually identical, but look different because of the background color. It’s important when playing that you look at how it appears on the board because that’s how all of the other players will be making their guesses.

A single-word cue can be extremely hard to come up with, and the experience will remind you a bit of playing Codenames. What’s the one perfect word that will direct guessers to the right spot? In Hues and Cues, I like the way that you get a second chance with two words. If you realize that everyone misinterpreted your first cue entirely, you can use the second cue to redirect. Or, if you could tell people have the right idea but aren’t quite close enough to the target, you might give a cue that could narrow things down for them. Also, as with Codenames, the time spent coming up with a clue is the biggest downtime while playing. It can give the other players time to socialize (or work on their own cues), but it’s also quite likely that your game will take much longer than the advertised 30 minutes, especially with more players.

Some clues are pretty obvious and you’ll get a lot of guesses clustered in one area. “Kermit,” for instance, is going to draw people immediately to the green area. “Grape,” on the other hand, may split up the votes among green, red, and purple (and, frankly, isn’t a very good clue for that reason). There are definitely times where I gave a clue, and then only realized after people started guessing that of course it could be interpreted in two (or more) different ways.

The rule about not using color-based words is one that has been hard to pin down and is likely to lead to a bit of rules-lawyering. As stated in the rulebook, your cue “may not be a common color name (orange, blue, green, yellow, etc.) but may be an abstract color name (chartreuse, golden, lavender, etc.).” It’s the examples that really threw us off. Sure, “chartreuse” is a liqueur, but most people just use it as a color word. And “golden”? That rule led my kids to give clues like “teal-ish.” My suggestion is that you figure out, for your own group, how you want to define “common,” whether that’s “a color you’d find in a box of 24 crayons” or “anything that might be listed as a color in a Lands’ End catalog.”

[Edited: my edition did not include the 3-player scoring rules, so I’ve removed some lines that are inaccurate.] The scoring is clever because even though everyone is competing, it encourages the cue giver to do their best as well: even though other players will get points if they guess your color, you also score points if they’re close enough. With more players, the guessers max out at 5 points, but the cue giver could score up to 9 points if the scoring frame is filled. That’s also why Hues and Cues works better with more players: with only 2 players guessing, it’s possible for nobody to fall inside the frame at all. With so more guessers, you get a little bit of the shotgun approach, where something’s guaranteed to land in the frame unless your cue is just totally confusing.

As with many guessing-based games, a lot of your experience with Hues and Cues will depend on the clues. Codenames can be a blast to play, but it can also fall apart if the players giving hints are completely off the mark. My first couple plays, with two of my kids during the pandemic, didn’t go over as well. (Remember “teal-ish”? Imagine two full rounds of that.) Adding a few players definitely helped, when my wife and older daughter joined in, but I had the most fun with it playing with a big group, and having a lot more different types of clues.

Hues and Cues is more for those who want to enjoy some social activity while playing a simpler game, and less targeted at those seeking something strategic or more complex. If you’ve got a big group that loves guessing games, give this colorful game a spin!

For more about Hues and Cues, visit The Op website! 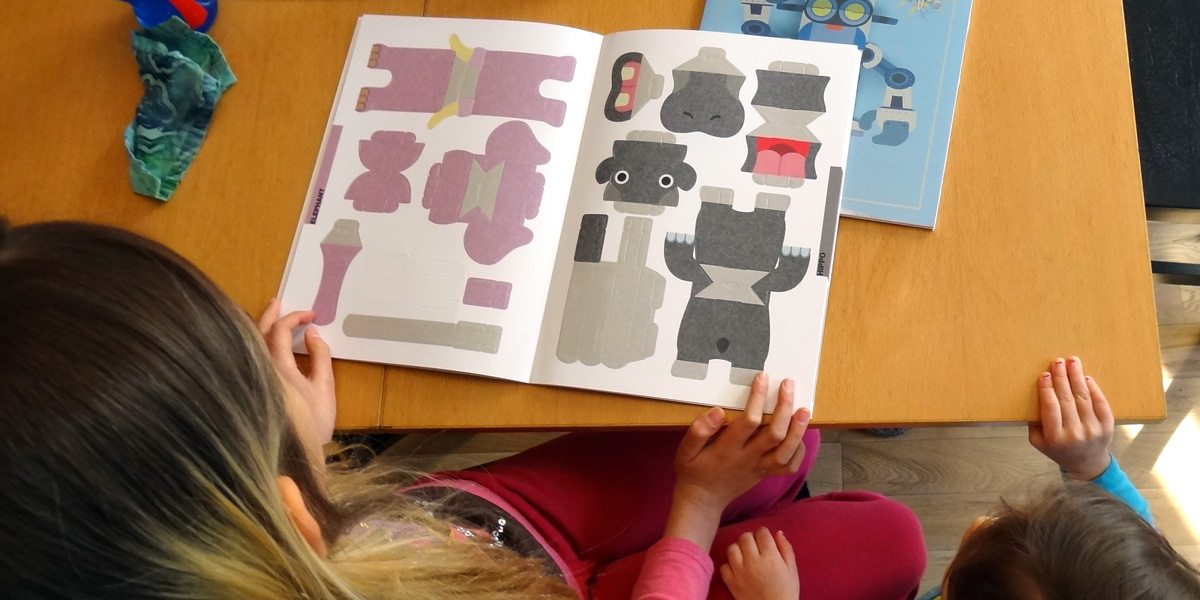 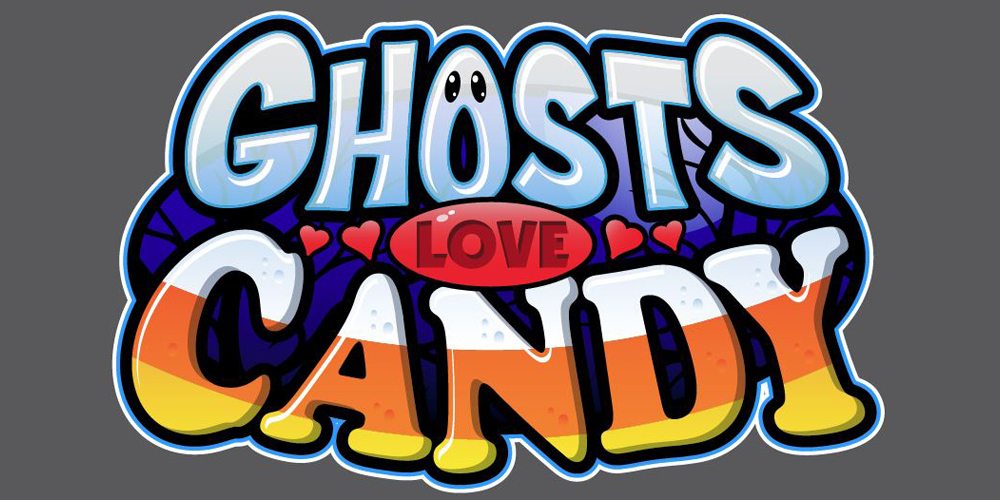