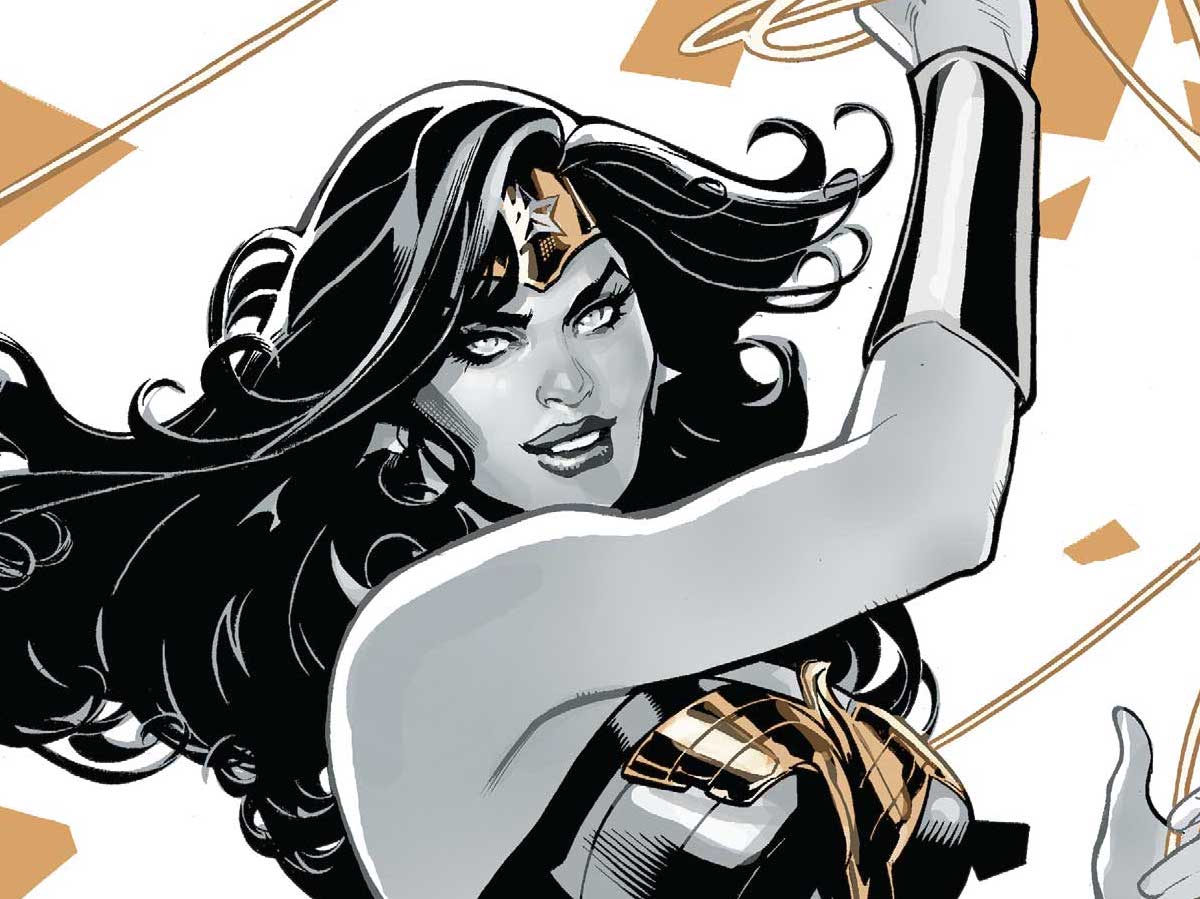 Ray: Five more stories of Diana’s world from top creative teams. Last month’s debut had more of an indie edge than previous anthologies, and that continues this month with several of the creators being new to DC.

First up, though, it’s a megawatt creative team with Mariko Tamaki and Jamie McKelvie on “Without Love.” Fittingly for McKelvie, it’s a story set in the world of the gods. When love dies in the human world—with humans becoming incapable of the emotion—Diana traces the source of the contagion to a bizarre plan by Eros and Eris. The visuals are absolutely stunning, and it’s great to see the chaotic goddess again for the first time in a while. This could have easily been a longer story, but the creators manage to pull off a satisfying read in under ten.

“A God With No Name,” by Che Grayson and Corin Howell, is a horror story. I’m not sure if this is the same First Born, the villain from Azzarello’s run, but it deals with a mysterious son of Zeus and Hera who haunts Themyscira. While Hippolyta lies dying from a mysterious ailment, Diana confronts a horrific spectre that represents an old crime as well as her own anxieties. It’s fast-paced and over quickly, but it works as a white-knuckle campfire tale.

Indie sensation Tillie Walden makes her DC debut, the first writer/artist in this issue. She’s always been a creator known for subtle, haunting visuals, and “Homecoming” is no exception. We follow a classic-style Wonder Woman as she flies over Themyscira, only to find some unexpected threats. As she comes through every trial, she seems to be getting younger, until she’s a child reuniting with her mother. The epilogue delivers a poignant punch that illustrates just how good Walden is at what she does.

Upcoming Nubia writer Stephanie Williams and artist Ashley A. Woods collaborate on “A Common Motivator.” With Bana Mighdall returning to Themyscira for a friendly competition, Diana’s rivalry with Artemis is reignited—and so is her partnership with Nubia as they team up to win the day with their strong personalities clashing. Diana and Nubia are essentially sisters, but this is the first time in a long time that they’ve felt like it—complete with the sibling bickering that’s pretty much unavoidable. Funny and clever with some great visuals.

Finally, it’s Rachel Smythe on “The Acquaintance,” a cartoony story with a style unlike anything else we’ve seen so far. As Diana visits Circe’s manor to retrieve a friend who angered the sorceress, the two old enemies bond over their place as women trying to change the world of the Gods. This version of Circe as essentially Diana’s chaotic wine aunt is something hilarious, and I won’t spoil the ending. Trust me. Just read it and enjoy, because it’s the funniest scene I’ve seen in a comic in a very long time.