I’ve been thinking a bit about why I love talking about Kickstarter games so much. I worry at times that my reviews and roundups promote FOMO and, according to this recent article in Polygon, are helping to kill board game expansions. I’ll say, for the record, that while I don’t agree with everything in that article—particularly the idea that game expansions are primarily about fixing problems with a base game, though some expansions do that—I do think it can be tough for tabletop fans who feel like they could potentially miss out on something great if they don’t back it right now.

I’ve also seen the reasoning that any write-up of a game that is only on Kickstarter and won’t be in retail stores later should be considered purely marketing and not a review. (In case you weren’t aware, there’s an ongoing discussion among board game content creators about what makes something a “review” or a “preview” or something else entirely.) I’ll admit that, yes, in many instances what I’m doing is a form of marketing, but that’s a big part of why I write for a blog anyway: to tell more people about things that I think are cool, because part of being a geek is sharing your passion for things with as many people as you can. For my reviews—I’m calling them that—I hope they give you enough information to make a decision about whether you would enjoy a game, with the understanding that it’s not always necessary to buy it yourself, and that nobody can play everything (though, you know, I’m working on it).

My Kickstarter roundup posts, on the other hand, are a little less rigorous. Most of these are based on conjecture, and I’ll note if I’ve actually played a game or not. These are just shiny things that caught my eye, so take these recommendations with a grain of salt.

I think I’ve also viewed Kickstarter as a sort of optimism during the pandemic: backing a game that wouldn’t arrive for another year or so came with the hope that I’d be able to play it by then, that soon I’ll have people sitting around my table, punching out cardboard and perusing rulebooks and enjoying each other’s company. That’s just starting to happen for me (I hit my fully-vaccinated point last week), and as older kids became eligible, the ranks of potential game night visitors is growing, with the last piece of the puzzle for me being when even younger kids can get the vaccine.

In the meantime, several more games launched this past week! I’ll be taking a more in-depth look at a couple of these, but for now here’s a quick taste.

I actually haven’t played the Lockup base game, but I’m a fan of both Roll Player and Cartographers, which share a universe with Lockup. Lockup takes place in a prison in this fantasy world, where you manage a group of minions, building up your reputation while avoiding the suspicion of guards. The Breakout expansion adds some old catacombs underneath the prison, where you can try your luck at finding treasure, or escape altogether.

The Isle of Cats expansions by The City of Games

The Isle of Cats, one of our 2020 Game of the Year finalists, is getting three new expansions: Kittens + Beasts, the Boat pack, and a Kickstarter pack. There are also options for backers to get content from the first Kickstarter (and the base game), as well as a big box that includes a storage solution to help you get the game set up quickly.

I’ve just recently gotten a review copy of the Adventure Tactics base game, so I’m hoping I’ll be able to post a review of that soon. Meanwhile, there’s a new campaign for the expansion. Adventure Tactics is a cooperative dungeon crawl, a sort of hybrid RPG that doesn’t require a dungeon master, and it uses cards to let you customize how your character levels up. The expansion adds a new class—the alchemist, naturally—as well as some allies, new terrain, and a new mini campaign. 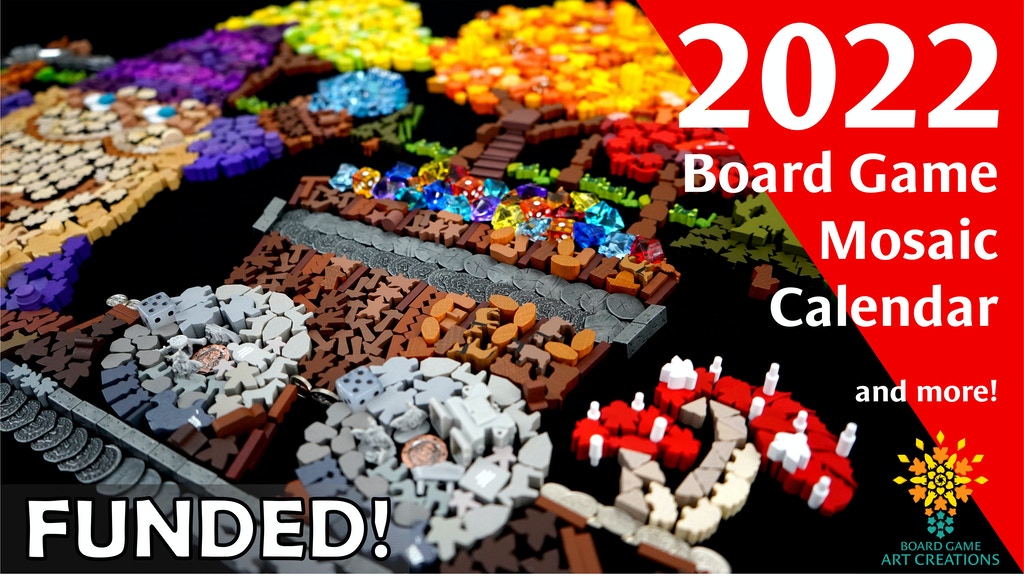 I’ve been seeing Katia Howatson’s board game mosaics on social media for a while now, and they’re astounding. Each one is made from board game components, laid out and photographed. The calendar has a board game image for each month, as well as the publisher’s logo, and has room for games you played, and a 10×10 challenge at the back. There are also add-ons for mugs and magnets!

Fall of the Mountain King by Burnt Island Games

This game is a standalone prequel to In the Hall of the Mountain King (which was designed by Jay Cormier and Graeme Jahns). In Fall of the Mountain King, designed by Adam Daulton, you play as trolls facing waves of invasions of gnomes. I’ve played it on Tabletop Simulator and am awaiting a physical prototype for a full review. It’s a curious blend of tableau-building, action management, and area control… but the important thing is to get rid of all these pesky gnomes that keep getting into your caverns!

I’ll wrap up with this one, which is exactly what the title says: they’re polyhedral dice, with tiny white whales embedded in them. Perfect for fans of “Baby Beluga” and D&D, right?