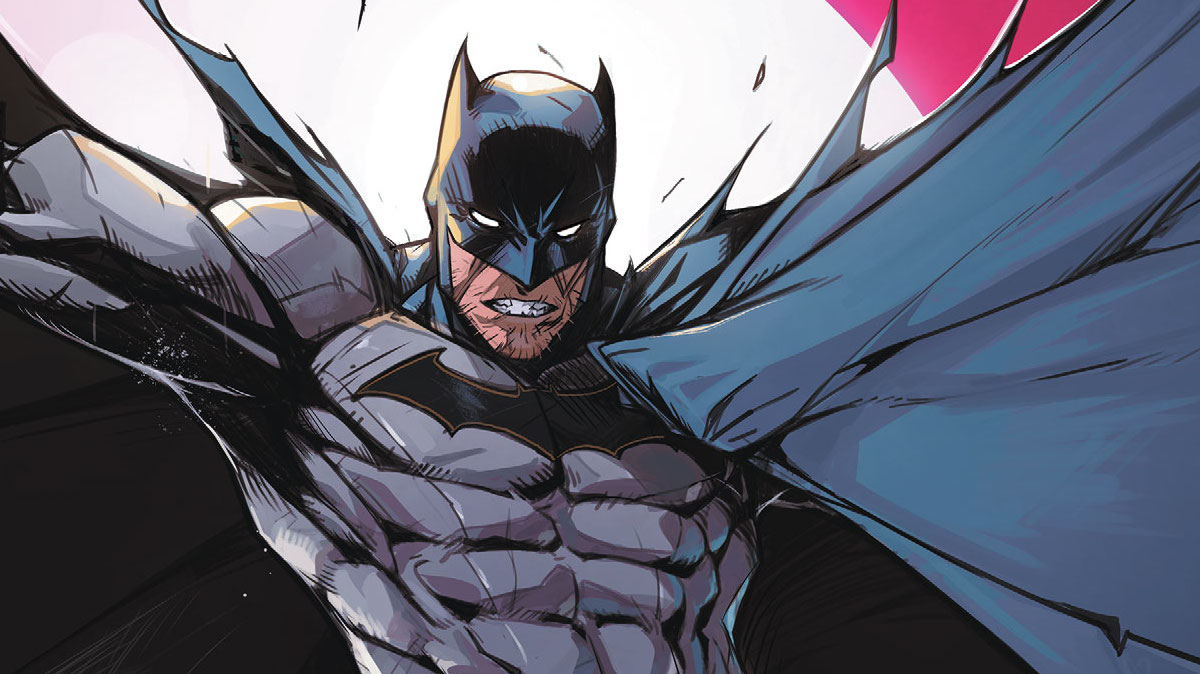 Ray: There are too many plot threads in Gotham to count, so DC is supplementing the Bat-line with the oversized anthology Urban Legends. This first issue has four stories continuing threads introduced in Future State—and introducing a major new talent to the Bat-line.

That would be Chip Zdarsky, who teams with regular Bat-artist Eddy Barrows on a Red Hood/Batman story. Red Hood’s gotten quite the spotlight lately with a-list talents taking on the Batfam’s bad boy. From the start, there’s a clever twist to explain Red Hood’s closer work with his family—he uses rubber bullets now. This oversized story—about thirty pages—pits both Red Hood and his former mentor against a new street drug that’s destroying Gotham. Called Cheerdrops, it seems to work like a drug version of the Black Mercy—making people see their fondest desires, even as it puts them in a coma or makes them take extremely risky moves like walking into traffic. While Batman and Red Hood chase different leads, Red Hood encounters a kid whose mother has fallen victim to the drug. Flashbacks shed some new light on the complex relationship between Bruce and Jason, and the story builds to a brutal and emotional climax that will likely put new stress on that father-son bond. It’s more proof that Zdarsky, while often known for his comedy, is one of the best dramatic writers in comics.

Next up is a one-shot story by Stephanie Phillips and Laura Braga, a Harley & Ivy prelude to Harley’s upcoming solo series. At only eight pages, this is more of a tease than anything, but it works well. Focusing on Harley returning to her and Ivy’s old base while she searches for Ivy, it flashes back to their past relationship as they build a garden together and Harley learns a little about plants—and about functioning relationships. It’s only a snapshot, but it gets across nicely that these two had something special. It seems like the relationship is on the back burner for now due to Ivy’s ongoing plotlines as Queen Ivy, but even if they’re not together, Phillips makes the case that these two (former?) villains are one of DC’s best couples.

Next up is an Outsiders story by Brandon Thomas (who wrote the characters in Future State) and artist Max Dunbar. At only ten pages, this is another quick one focusing on Black Lightning, Katana, and Metamorpho. It sets us up in the middle of the action, as the trio battles an army of magic ninjas in Japan—only for two of them to wind up captured while the third is in the battle of her life against an ancient enemy. It’s definitely a lighter story than Thomas’ Future State mini, but it has the same action-movie energy. It’s a fun read—and then it takes a very clever twist with the last splash page and makes me wonder what the hell is going to happen in the next chapter. DC needs more of Thomas’ chaotic energy in their superheroes.

Finally, it’s a Grifter full-length story by Matt Rosenberg and Ryan Benjamin. This story packs a lot into its twenty pages, starting with a flashback to Grifter’s earlier years that will ring a lot of bells for Wildstorm fans. In many ways, DC seems to be setting up Grifter as the action movie version of John Constantine—a guy perfectly at home on both sides of the fence. When he’s not serving as Lucius Fox’s attache, he’s meeting with supervillains and using them as contacts. The action is fast-paced, the dialogue is funny, and Batman’s appearance shows he really doesn’t know how to deal with yet another wild card in Gotham. The ending is my only quibble, as it’s either a weak fake-out or a major but pointless death. Overall, though, a very solid first issue with no real weak spots.

Lost in the Shuffle: DC Comic Announcements From Comic Con