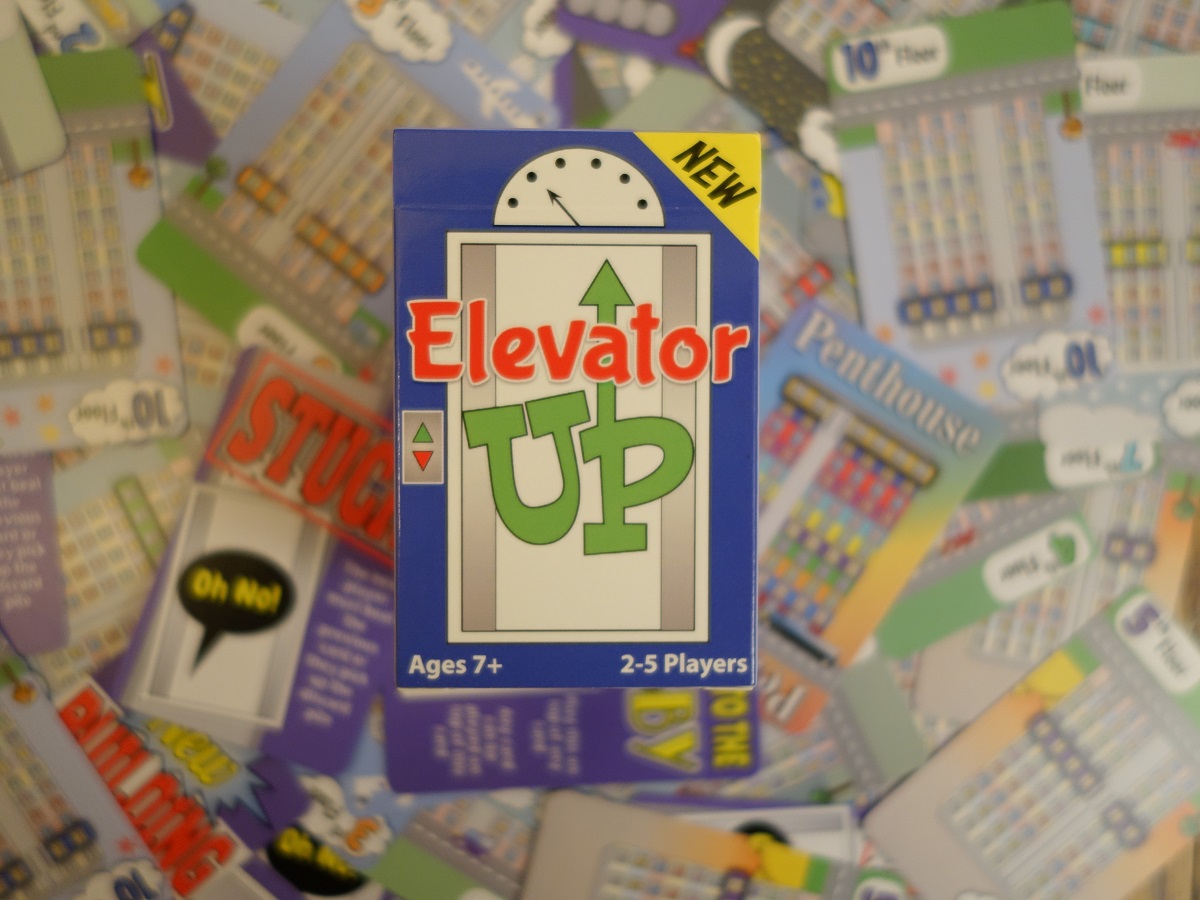 Card games are popular for families and get-togethers since they are often easy to learn and quick to play. In addition, they are convenient to stick in a pocket or backpack, making them great for taking them on the road or while camping. While there are a lot of popular and well-known card games, ElevatorUp is a new game in this genre and has the potential to become a favorite for casual and serious gamers alike.

ElevatorUp is a fast-paced card game for 2-5 players, ages 7 years and up, and takes about 10 minutes to play. It’s currently available from Amazon and sells for $11.99. ElevatorUp was designed by Harrison Brooks and published by Spark LLC, with illustrations by Harrison Brooks.

Floor cards are the main cards played during the game. They range from 2nd floor all the way up to 10th floor with four copies of each floor in the deck.

The goal of the game is to be the first player to get rid of all your cards.

Start off by shuffling the deck and then dealing three cards face down to each player. No one can look at these cards until later in the game. Then deal two cards face up to each player. They remain on the table face up throughout the game. Next deal three cards face down to each player to form their hands. The remainder of the deck of cards is then placed in the center of the play area with a space next to it for discards. Finally, each player can swap one or both of their face up cards with cards in their hand. This is the only time players can swap these cards with their hand.  Once this is completed, you are ready to play.

Once the players have decided who will go first, players take turns discarding a card from their hand that is either a floor card higher than the previously played card or a special card. If there is no previously played card, then any card can be played. If you have more than one of the same type of card, you can play all of them together. For example, if you have three 5th Floor cards, you can discard all three of them at the same time. If a player plays all four of the same floor card, then the entire discard pile is removed from the game and that player may go again.

After discarding, if you have fewer than three cards in your hand, you must draw from the deck to bring your hand back up to three cards. If a player cannot play a special card or a floor card higher than the one previously played, that player then picks up the entire discard pile and adds it to their hand. Play then moves to the next player.

Once the deck runs out of cards, players continue to play from their hand without drawing any new cards. Once their hand is empty, a player then plays their face up cards that are on the table. When both of those cards have been played, when its their turn, a player flips over the top card of the face down pile and attempts to play it. If it is not a special card or is not higher than the last floor card played, that player then picks up the discard pile and adds it to their hand. You have to play all the cards in this new hand before you can play any more of the face down cards.

The game ends when one player is able to get rid of all of their cards. However, since a game only takes about 10 minutes, why not play again–and then again.

When I first heard about ElevatorUp and that it was designed by a 17-year old high school student, not only did I want to try the game, I also wanted to talk to its creator. Harrison Brooks, who labels himself the CEO (Chief Elevator Operator) was kind enough to grant my request for an interview. He explained the he has always loved card games and came up with the basic premise when he was about 12 years old. Since that time he has refined the game into what is ElevatorUp. Harrison has always loved to create things whether it was making a sculpture for art or using building blocks when he was younger. Since he loves games, it was natural that he would begin creating games a well. He came up with several other game ideas, however ElevatorUp worked and he continued to play it with friends and family until it evolved into what he felt was a full and complete game. It originally did not have a theme, but Harrison explained that since he is a city boy, the elevator theme seemed to fit the gameplay the best.

Not only did Harrison create the gameplay, he used the skills he learned in his art classes at school and by tinkering around with digital design to also do all the art on the cards. He even found a printer in China and self-published the game. However, along the way, Harrison also faced several challenges. He shared, “My plan for ElevatorUp’s launch was centered around in-person demos at mom-and-pop, brick-and-mortar toy/game/book stores. With everything being shut down (due to the COVID-19 pandemic), I had to shift to online sales focusing on Amazon. Figuring out SEO, advertising, and other online marketing was certainly a struggle and still is, but I have enjoyed learning about these new areas.”

Harrison also described that his favorite part of ElevatorUp is the strategy involved as well as the unknown component of having the three face down cards you have to play towards the end. You could play the perfect game and then lose at the end depending on what cards were in that pile.

Why You Should Play ElevatorUp

ElevatorUp is very easy to learn. The setup is unique, but once you have played one game, setup is quicker for the next game. My family loved this game. After the first game, my kids wanted to play again. We must have played 6-7 games of ElevatorUp one right after the other. Even if you lose one game, the game is so fast-paced that you want to play another and make another attempt at winning.

The art on the cards has a colorful and playful feel. The gameplay is well-balanced and keeps everyone engaged right up to the end. I really like the mechanic of having a face down pile and two face up cards that you can’t touch until you empty the deck as well as your hand. All players can see the face up cards and then use strategy to prevent you from being able to play those cards and instead have to take the discard pile into your hand. However, those face down cards provide an element of surprise for all players since no one know what they hold. I was playing one game and had emptied my hand while the other players still had quite a few cards in their hands. However, low-numbered floor cards in my face down pile ended up costing me the game. On other games, I had a huge hand but was able to still come back and win the game due to other player’s hidden cards.

I thoroughly enjoyed playing ElevatorUp as did my family. It is perfect as a quick pick-up-and-play game which can be played just about anywhere. Whether you make it the main game for the night or use it as a starter for a game night, I recommend making ElevatorUp a part of your game collection.

If ElevatorUp sounds like a game for you and your family, pick up a copy from Amazon and help support a young game designer. 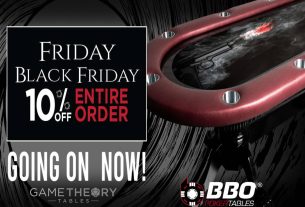