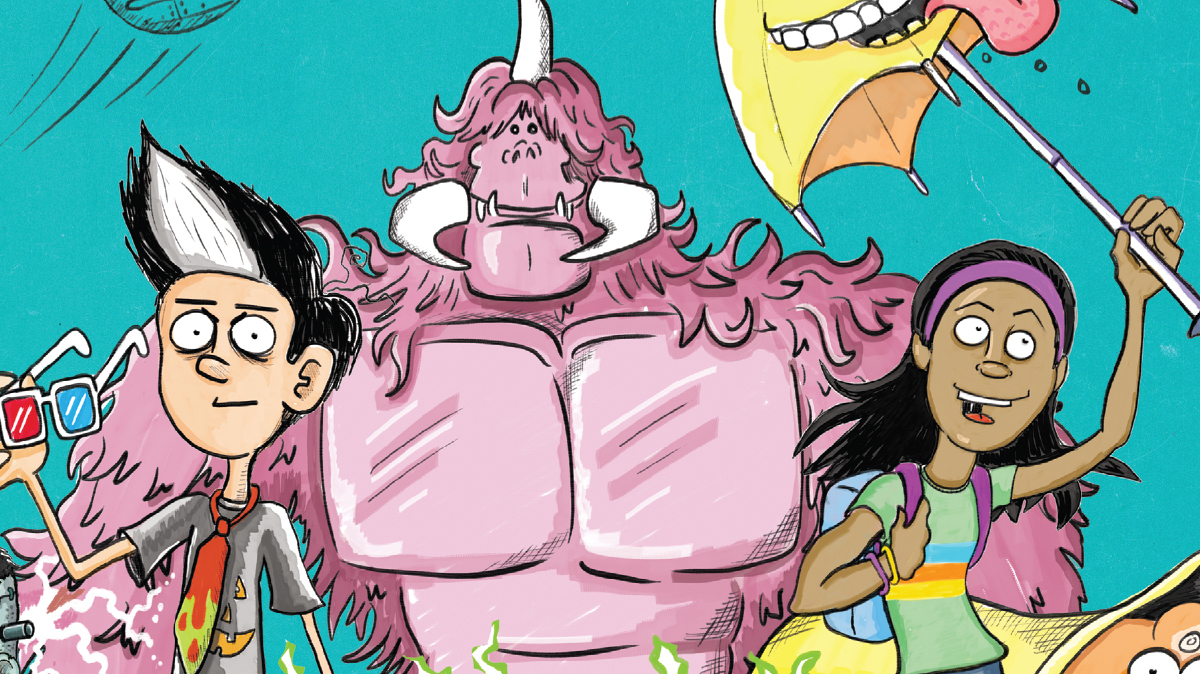 Ray: Cartoonist Kirk Scroggs gave us one of the most inventive graphic novels in the all-ages line when he reinvented classic Vertigo mythology for The Secret Spiral of Swamp Kid. More a journal combined with cartoons than a traditional comic, it felt very much in the vein of classics of the genre like the works of Dav Pilkey and Stephen Pastis. It was a lot of fun, if maybe a bit too ambitious for its format. Scroggs has taken all the good things in that book and turned them up to eleven for the sequel in spirit We Found a Monster, one of the most clever and unique books DC has put out in a while. He also answered some questions for the website, so stay tuned at the end for an interview!

We Found a Monster focuses on Casey Clive, an eccentric middle schooler with a skunk stripe in his hair who lives with his widowed father. He deals with bullies in school, struggles to make friends—at least, human friends. See, Casey collects monsters, and has turned his house into a sanctuary for everything from patchwork science experiments to giant sea creatures. How his father never notices these monsters roaming around, it’s not clear—but one suspects his still-grieving father may not notice a lot of things.

I wasn’t sure when this was announced if it was a total original or would be a DC graphic novel, and it turns out Scroggs knows his DC lore and the roots here run deep. While Casey (and his partner in monster-rescue Zandra) both seem to be original characters, their friendly monsters are some of the most famous creatures from DC history. Look for She-Bat (aka Francine Langstrom), Topo the Octopus, Frankenstein, and a new version of the monster from Stanley and his Monster. Many of these characters are very different, but it’s clear that Scroggs loves the old-school DC monster comics.

Speaking of Zandra, while it’s Casey who plays the lead here, this almost feels like a two-character story. Zandra, the eccentric girl who joins Casey’s class, soon proves to be a match for him. While Casey’s the more experienced monster-tracker, she manages to find and rescue an even bigger and more imposing one. She’s also the only person who manages to get under Casey’s skin and get past the walls he’s put up around himself, and watching him slowly warm up and find a genuine bond over the course of the book is great.

While there is a lot of plot in this book, including a creepy robot orb that’s trying to capture Zandra’s pet monster, there’s something much deeper at the core of this story than monsters. This is ultimately a great story about grief and recovery, as we meet Casey and his father as they’re obviously still healing from a fresh loss. Casey’s mother is sort of shrouded in mystery through this story, although we learn a lot more about her as it goes on. There are a lot of great details that drive home the impact of this loss without it ever being discussed too directly.

The DC graphic novels have played a lot with format, but the work of Kirk Scroggs feels like the one that most perfectly captures the direction that has resulted in the biggest hits for the genre. I’m looking forward to seeing what he does for DC next. Dare I hope for a crossover where Casey and Zandra try to locate the mysterious Swamp Kid?

And now, Kirk Scroggs was kind enough to answer some questions for GeekDad, so read below for an interview!

I wasn’t sure this was going to be a “DC story” when it began, but then one surprise DC character after another showed up! How did you decide which DC monsters to include?

Kirk: We Found a Monster is all about outcasts. Casey and Zandra both feel a little bit like they exist on the sidelines at school and in life. In keeping with that theme, I thought it would be fun to pluck some DC characters from deep within the vault and give them a little time to shine. Teekl, the shape-shifting cat, is probably the most well-known of the DC crew in the story, but She-Bat, Spot, Topo, and a couple other surprises have all been hiding in the shadows for a while. There really is a whole library of monsters to choose from and I went with the strangest, of course, because I’m strange.

Who’s your favorite DC monster/horror character you didn’t manage to include here?

Kirk: Well, there’s a beautiful weirdo named Animal Vegetable Mineral Man that I’m dying to get in there. He’s a Super-Villain who’s usually part T-Rex, part mineral, and part plant, like celery or ivy. I gotta use this guy. Although, since he’s part plant, perhaps I should save him for a Swamp Kid story? Hmmm.

Zandra played a pretty big role in We Found a Monster, especially given *redacted*. Was she inspired by any existing DC characters, or is she a total original?

Kirk: Zandra is really a co-lead with Casey. She’s just got some weird *redacted* in her past. She’s so *redacted* that it’s hard to talk about her without major spoilerage. Let’s just say that I see Zandra as a kind of link between the supernatural and the superhero.

If Casey and Zandra ran into Russell from “The Secret Spiral of Swamp Kid,” how would that encounter go? (Unless this is a spoiler for an upcoming crossover sequel, of course.)

Kirk: I think they’d all bond around their love for drawing. Casey would be the hardest nut to crack, though. He enjoys his outcast status while Swamp Kid and Zandra are more eager to make friends. Swamp Kid would probably have to pass a rigorous pop quiz on monster movies before Casey would give him the A-Okay!

Mixed in with all the monster mayhem in this book are some pretty powerful messages about grief and coping with loss. What are you hoping young readers struggling with the same things Casey is take away from this story?

Kirk: As someone who lost a parent at a young age, I know the whirlwind of emotions that come with it first-hand. Like Casey, in the story, I was tempted to retreat from friends and family. And my friends had a hard time communicating with me, I’m sure because they were afraid to say the wrong things. It’s awkward! As time went on, I came to understand that they loved me and that by just being open with them about my feelings helped them be open with me. It got rid of the awkwardness. Casey is someone who doesn’t have a lot of friends so it’s extra tough for him to cope. By opening himself up to this crazy new girl in school and gradually welcoming her as a friend he’s taking a very important step in moving forward. He’s not alone.

What are the monster and horror movies that have influenced you the most?

Kirk: I’ve always liked Frankenstein in the old Universal movies and King Kong. They are creatures that are misunderstood and just want love and acceptance. Frankenstein actually shows up in We Found a Monster, sporting an invisible arm! I think the main monster character, Spot, really fits this mold as well. He’s a big ol’ lug with a heart of gold, but he doesn’t know his own strength and is, of course, feared by the world around him. Casey offers a place of acceptance and family for Spot and all the misunderstood monsters of the world.