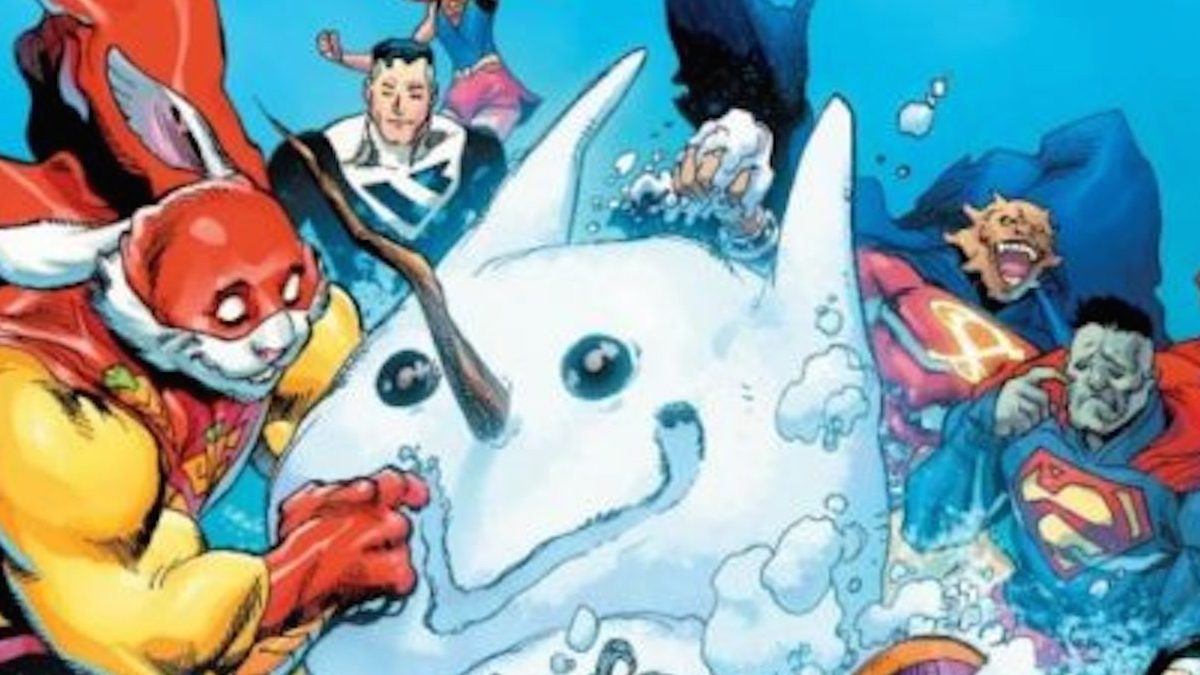 Ray: It’s time for DC’s annual holiday anthology, and this one is packed with ten tales from across some of DC’s most unique worlds in the multiverse. What it doesn’t have is many of the biggest names in DC’s writing pool, with one exception, but that gives some lesser-known talents the chance to shine. How does this giant-sized volume shape up compared to the competition?

First up is the oddball Harley tale “It’s a Horrible Life” from the writing team of Scheer and Giovanetti and artist Steve Lieber. A depressed Harley is planning to unleash hell on Gotham after her Christmas is ruined, but an off-kilter angel with a taste for pretending to commit suicide has other plans. He takes her through various worlds of the multiverse that show her how odd her life could have gone—and some that seem to just be here to make us laugh. The angel’s identity reveal is a big surprise, although Harley seems a bit more hard-edged here than she has been in years. Overall, a perfectly weird Harley tale.

Next up is something completely different from John Layman and Dani in “Christmas by Gaslight.” Revisiting one of the most famous Elseworlds of all time, this Victorian-accented story pits Batman against a pair of villains—a ruthless Mr. Freeze, and a shapeshifting scoundrel by the name of Eel O’Brien. The transformation of Plastic Man into a gentleman thief who robs from the rich to give to the poor works nicely, and the art on this story is brilliant. I’d read a whole miniseries of this world from this team.

Next up are Ivan Cohen and Eleanora Carlini on the most talked-about book in this anthology, featuring the debut of Teen Justice. This is set on Earth 11, where all the genders are reversed and Laurel Kent and Talia Kane are having a team-up of the Super-Daughters that gets interrupted by a Starro attack possessing their parents. They’re soon joined by a group of other teen heroes including Donald Troy, Jacqui Hyde, Klarienne—and most significantly, the non-binary Kid Quick. There are a lot of characters here and this story is rather chaotic, but funny and with some heroes I’d love to see again.

David F. Walker and Gustavo Duarte take on President Superman for “Bizarro Love Holiday,” and focuses on an original holiday created by President Superman to unite the world. There’s just one person who doesn’t love this special holiday—Bizarro, who has never received a present and is in full Grinch mode. He comes to Earth to destroy the presents, but in the grand holiday special tradition, finds something very different. The story is simple but charming, and the cartoony art is perfect for this oddball story.

Next, it’s the Lil Gotham creative team of Fridolfs and Nguyen, but they’re not doing another chibi story. Instead, it’s a return to the world of Batman Beyond for “Holidays Beyond.” When Terry seeks to retrieve an artifact of Bruce’s time as Batman, he winds up attacked and wakes up in a world without Batman. Guided by three “ghosts” of the past, present, and future, he discovers the many ways Gotham could have changed. The ending has a great emotional punch, as we discover what exactly drove Terry to the bottom of the sea. These creators would be great on a regular Bat-book.

“Night of the Magi” by Sholly Fisch and Vanessa Del Rey is something very different. Focusing on a world of the supernatural protected by the League of Shadows, it switches back and forth between the present day and ancient Egypt, as we discover the dark secret of a mummified version of Ragman. The fusion of the two characters is clever—Ragman always had a bit of a mummy vibe—and the origin is well done. This is much darker than I’m used to seeing from Fisch, one of the best all-ages writers at DC.

Tom Sniegoski and Justin Mason get to do “Have Yourself a Bizarro Little Christmas” and I’ll be honest here—there was very little chance I would be into this one. I’m iffy on Bizarro at the best of time, but I can rarely stand Bizarro World. This one focuses on the horrible reverse-world where everything is awful, including the holidays. Bizarro gives his teammates (including a grossly fat Bizarro Flash) awful gifts, and then they all team up to drive off a band of benevolent aliens that wanted to give them the gift of the holiday spirit (by force, if needed). You’re gonna need to be on a specific wavelength for this one, but the art is well-suited for the story.

“Twas the Night” by Brittan Holzherr and Todd Nauck, is a Booster Gold story that takes place on the Kingdom Come world. Booster’s restaurant is still in business, and he’s decided to put on the old super-suit and greet the guests. The only problem is, Max Lord is tired of superheroes and decides to crash the party. Despite the roots in one of the most epic DC stories of all time, this is actually a pretty well-done tribute to the iconic JLI era where these two characters were at their best. I’ve never heard of the writer here, but she hit this one out of the park and I hope DC keeps her in mind for future work.

Next up are Jay Baruchel and Dominike “Domo” Stanton on the most bizarre story in the volume, featuring Prez. This is the original Prez, not Mark Russell’s revamp, and it’s based around a Holiday telethon as Prez hosts and his various superhero friends and frenemies do increasingly bizarre acts. There’s even a commercial break where we’re introduced to something called “Tarp Detective.” Does it make any sense? Not really. Is it absolutely hilarious? Yes, and Baruchel’s showing some real comic chops.

Finally, it’s Tom King and Scott Koblish on a very, very strange Lobo Hanukkah tale. When Lobo is prohibited from visiting his beloved space dolphins (which he insists are “fish”) by a Dominator invasion, he naturally has to break in and kill everyone in sight. This is overlaid with passages from the actual Biblical story of the Maccabees, where the Hebrews who refused to convert to Greek religions waged a rebellion and won against all odds. Is this brilliant? Is this sacrilegious? Is it both? Where Lobo is involved, the answer is probably all three. I absolutely loved it.

Overall, this might be one of the most bizarre comics DC has ever put out. It’s absolutely not to be missed.