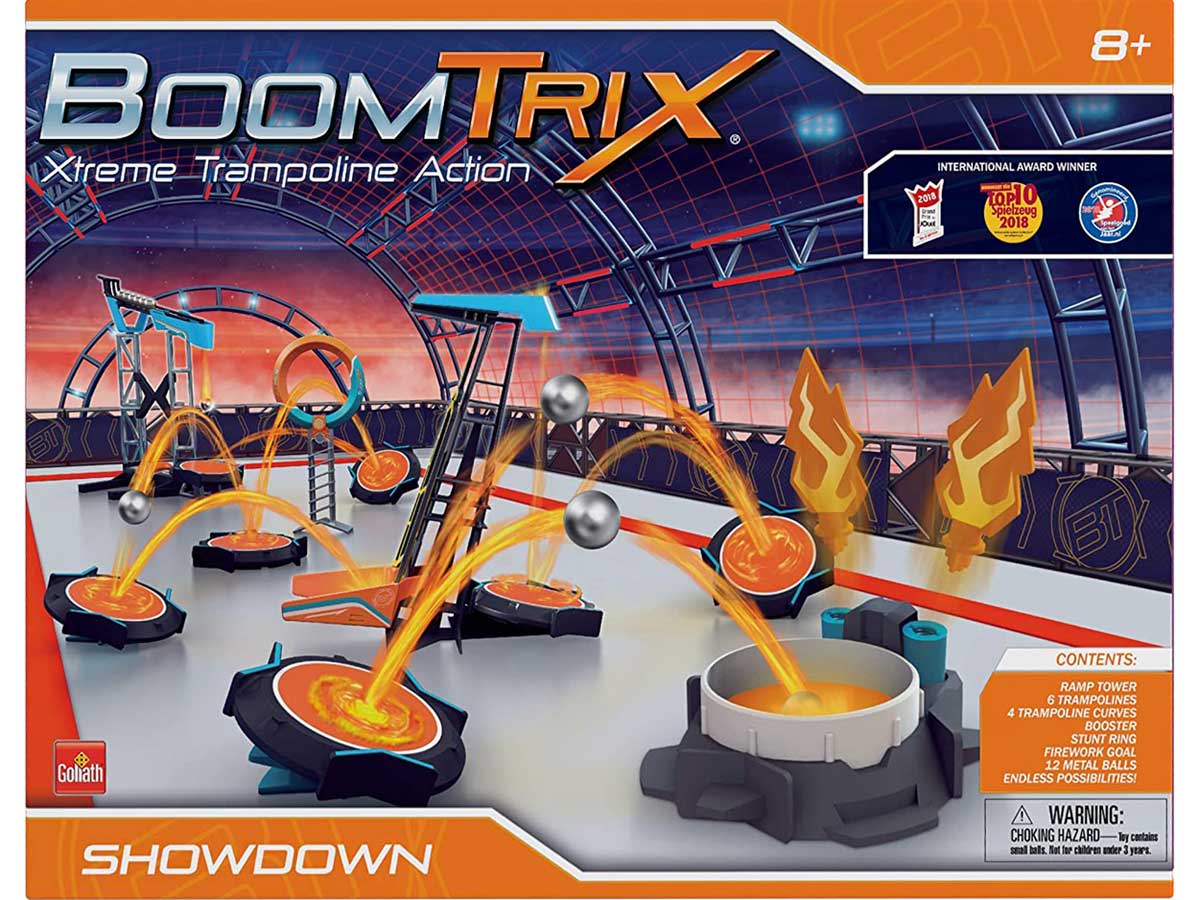 BoomTrix, from Goliath Games, is a series of sets of small trampolines and ball bearings, along with some other fun gadgets and devices so you can set up a course and send those metal marbles bouncing. I was sent the “Showdown” kit to try out, and my kids and I had a blast with it.

Here’s what comes in the Showdown set:

The ramp curves are small plastic bases that attach to the trampolines, holding them at an angle. The trampolines can be used with or without them, but you do need them to change the direction of the balls.

The tower and booster both require some assembly and stickering. The assembly is can be a little tricky, mostly because the instruction sheet isn’t very detailed, but we figured it out by comparing it to the pictures on the box as well.

The ramp tower is the launch tower: it has a chute that can hold more than the dozen balls provided in the kit, and also has a removable plastic tray at its base where you could presumably store even more marbles.The orange button on the base pulls down on a long plastic hook, which releases a marble (or sometimes more than one) through the chute, down onto the angled trampoline. It’s about 14″ high, not including the curved-up section of the chute.

The booster is a smaller tower, about 9″ tall, and can hold 3 or 4 marbles in it. It has a spring-loaded tray on the back, and when enough marbles land in it, it releases the stored marbles onto the attached trampoline. It’s needed to extend the path, because otherwise you start losing enough height in the bounces.

The stunt ring is a simple plastic stand with a cardboard ring that notches into it.

Finally, there’s the firework goal. It’s a cup with a small hole in the center: when the marble drops into the hole, the plastic “flames” tip outwards and spring out. It’s a funny effect to see, and resulted in a lot of gleeful giggles from my daughter.

We experimented with various setups: where do we put the stunt ring so that the marbles are jumping through at the right height? How many trampolines can we use before we need the booster? It can be a little tricky getting things set up just right, because the marbles don’t always bounce exactly the same distance every time, and also the trampolines can shift a little after you’ve dropped a dozen marbles on them.

The booster’s tray sometimes catches the marbles, and sometimes they bounce out again. Sometimes it will release just one marble at a time when you land a marble in it hard enough, but if you send them in at a shallower angle with less impact, then it may release them all at once only when there’s enough total weight.

When you do get things to run all the way from the launch tower to the firework goal, though, it’s a thrill! And it’s even fun when things don’t work out exactly the right way. You can’t tell quite as much in my video below, but the trampolines make a fun sound when the marbles hit them, too.

Here’s a video of one of our courses:

You might notice in one section that there are a lot of marbles on the floor surrounding the booster—that’s where they missed the tray or bounced out. Wherever you’re playing with this, make sure you don’t have floor vents to worry about, and that you’re ready to chase down stray balls that leave the course.

We’ve had a lot of fun with the Showdown kit: all three of my daughters (ages 7, 14, and 16) thought it was great and enjoyed trying out different configurations.

There are several sets to choose from, ranging from the $10 Stunt Pack to the $40 elevator extension kit, and they’re sold online through Amazon or Walmart.

Disclosure: I received a sample for review purposes. 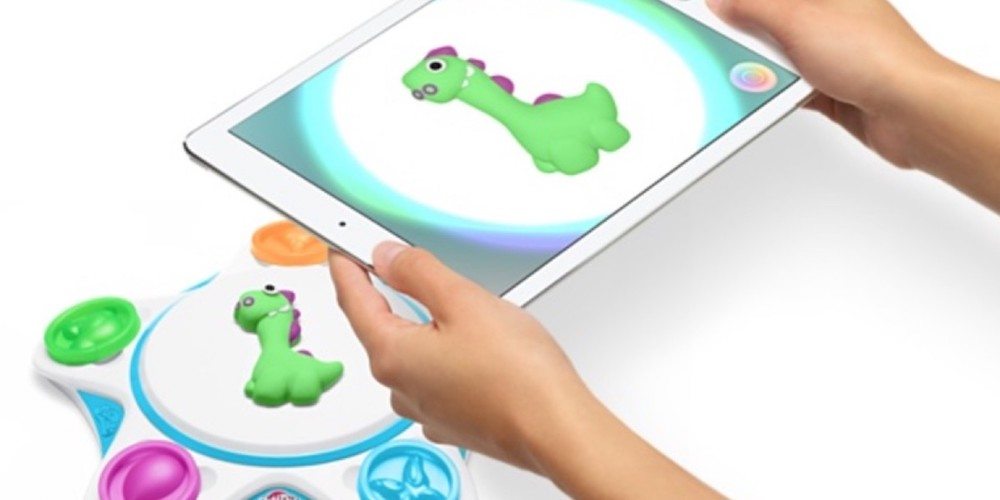 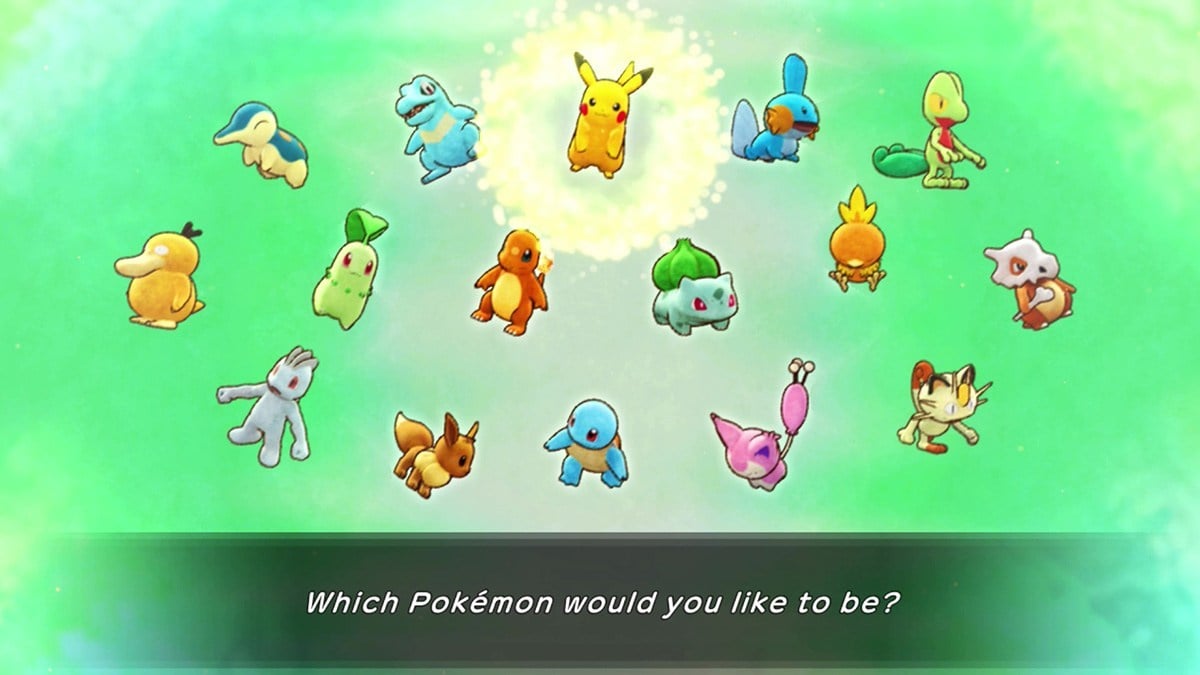