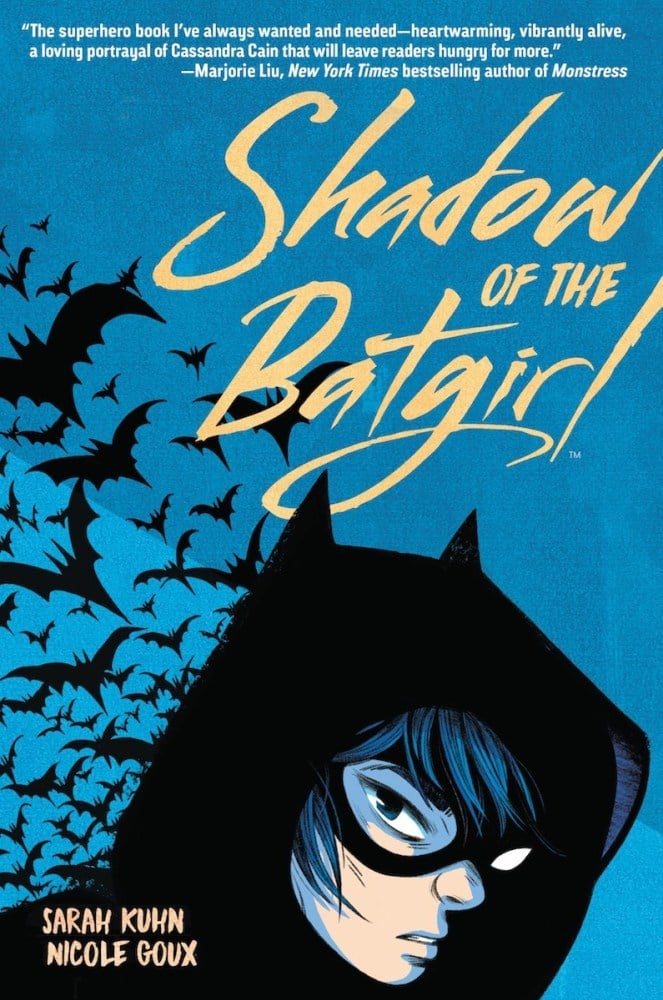 Shadow of the Batgirl is a reworking of Cassandra’s comic origin story, that of a young woman raised in a severely restrictive environment to become the ultimate weapon: an assassin with lightning-quick reflexes who can read body language. But Cassandra, raised to follow orders and not question killing, turns her back on that training. To her, life becomes sacred.

Her most powerful tale in regular comics continuity remains the iconic Batgirl #19, in which she declared “Nobody Dies Tonight.”

A side-effect of Cassandra’s abusive upbringing was the lack of language of and social skills. Written speech and its subtleties escape her as do regular interactions with people raised unlike herself. Those elements remain in Shadow of the Batgirl, along with some wonderful additions by Kuhn Goux, including a perfect setting for Cassandra’s discovery of the greater world.

In the beginning of Shadow of the Batgirl, Cassandra is sent to Gotham to kill. But when her victim pleads for mercy, something inside Cassandra makes her stop in mid-assault. She’s realized the full horror of her conditioning. She flees the scene and ends up in the Gotham Library, a perfect place for her to observe people and learn about the world.

The library is given a wonderful sense of place by Goux, and her depictions of the stacks and the window seats make me want to walk into the pages of the book and, like Cassandra, live in that library.

Due to her skills, Cassandra is able to avoid discovery and uses the library to teach herself to finally read and communicate. She’s terrified of coming into contact with anyone, mostly because she doesn’t trust herself to behave appropriately with them. She’s worried she might hurt them and, given how her reflexes have been honed, that turns out to be a valid concern later in the story.

All that makes Shadow of the Batgirl sound like a dark book but it’s not. It’s a story of a hero striving hard to do what’s right while having to overcome her own inner guilt about what she’d been forced to do. As she opens up more to books, she also begins to open up to people, including Barbara Gordon, who teaches a class at the library, and a new friend, Erik, who is in love with stories of hope.

The art, open rather than threatening, also helps keeps the story on the optimistic side, as you can see from the panels here. Cassandra may be a mystery to those she meets but, to the reader, her face is an open book, expressive, lively, and determined.

It’s at the library that Cass also learns about the Batgirl who protected Gotham and finally sees a path for her redemption. She can protect others the same way this Batgirl, who’s since vanished, used to do. (She doesn’t know that her new friend Barbara, now injured and using a wheelchair, was Batgirl.) The slow-growing friendship between Cassandra, an extremely private person, and Babs, one of the most curious people alive, is a joy to read.

There is a budding romance, too, between Cassandra and Erik. There’s a nice parallel in that they’re both trying to avoid the expectations that their parents have for them. But I also love that Erik is drawn to romances, with their hopeful endings, and the two bond over stories that show people overcoming the odds to find love and happiness. Cassandra sees herself in those stories.

The second new original character is Jacqueline Fujikawa Yoneyama, who owns a restaurant that Cassandra stumbles across in her quest for food. Jackie, as she insists Cassandra call her, instantly sees a young girl who needs help, comfort and understanding. Dubbing her “Mouse,” Jackie nourishes Cassandra, and not just with food. She also has some wonderful unexpected talents, which come into play later in the book.

Between Babs, her new potential love interest, Erik, and Jackie, Cassandra is making strides to overcome her past, at least until her father arrives to claim her and put her back to her “true” purpose. That leads to one of the most amazing action sequences in the comic, set again in that wonderful library.

This is a terrific book to give to anyone ages 10 and up (depending on the child), and it will also resonate deeply, I think, with those struggling with self-worth, especially teens who find it hard to control what they feel are wrong impulses. At one point, Cassandra acts impulsively, out of fear, and physically hurts someone who she cares about because she’s not yet overcome her programming. That she can find forgiveness for this amazes her, and the sequence where she talks it out with her friend, with the leaves blowing out of the panels around them, is one of the best in the book.

Click through to read all of “‘Shadow of the Batgirl’: Life Is Sacred” at GeekMom.If you value content from GeekMom, please support us via Patreon or use this link to shop at Amazon. Thanks!

HoNoToGroABeMo: Growing a Beard for Charity?

The Problem With Security Questions