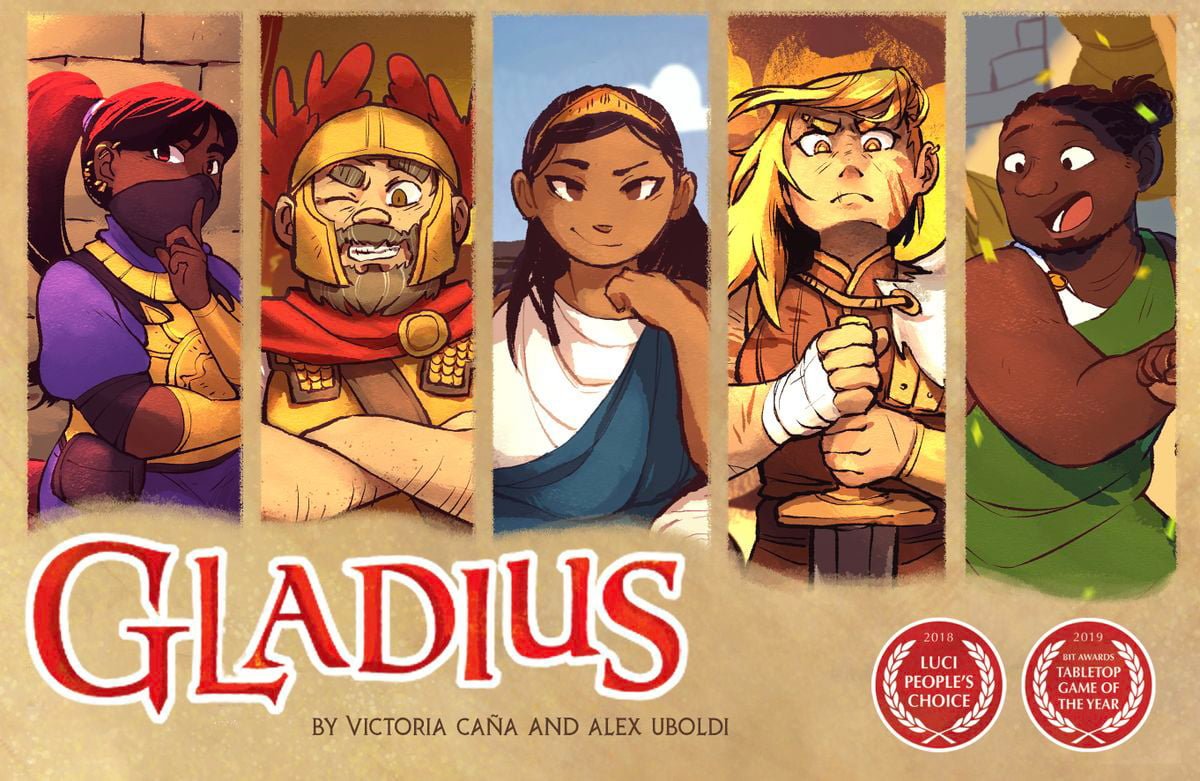 Place your bets on your favorite gladiators—and then use some sneaky tactics to make sure they win!

Gladius is a bidding/bluffing game designed by Victoria Caña and Alex Uboldi for 2 to 5 players, ages 13 and up, and takes about 30 minutes to play. It is currently seeking funding on Kickstarter, with a pledge of $25 for a copy of the game. (There’s also a $10 pledge level for access to the print and play version.) The gameplay isn’t too difficult and I think could be fine for somewhat younger kids, but since the theme involves gladiator combat (albeit with a cheerful, cartoony look), that may be something you take into consideration.

Note: My review is based on a prototype copy, so it is subject to change and may not reflect final component quality. However, the artwork and graphic design seems to be mostly finalized.

As you can see, the game is primarily cards with a couple of tokens. It’s not flashy (for that, you’ll want the Emperor’s Edition pledge tier) but is just exactly what you need for the game, and it fits in a compact box. I hope the final version keeps the same box size as the prototype.

The artwork on the cards, by Cheryl Young, is a lot of fun: it has a comic book feel to it with maybe a bit of manga influence, and all of the characters (both players and gladiators) have a lot of personality. I also like the wide range of people represented in the illustrations—different genders and ethnicities. There’s also some humor, like Olivius the Bait (who’s pictured running cheerfully away from a lion) and Dave (no epithet), dressed in a loincloth and wielding a wooden sword, who has 0 skills.

Each player has a unique power shown on their character card, but everyone’s deck of 20 influence cards is the same except for the card backs, making them easy to sort out.

Your betting tokens include values 3, 4, and 5, as well as two “death bet” tokens that are used to bet on the team you think will lose an event.

How to Play Gladius

The two-player game has a few variations, so I’ll explain the 3–5 player rules first, and then explain how the 2-player rules differ.

The goal of the game is to score the most points by correctly placing bets on which gladiators will win or lose each event over the course of three rounds.

Each player chooses a character and takes the power card, the matching deck of 20 influence cards, and the 7 bet tokens. Shuffle your influence deck and draw cards (6 cards each for 3–4 players, 5 cards each for 5 players).

Shuffle the gladiator deck and the event deck separately and set them nearby. Place the podium cards in a row. Find the three bet slot cards that match your player count, and put them in a row.

Give the first player token to whoever most recently ate Italian food.

The game takes place over three rounds, and the players are spectators betting on gladiators—and also using their own influence to affect the outcome of the games.

Each player in turn order now places one bet token on a bet slot card. Multiple players may bid on the same team, up to the number of slots available.

And now the fun begins! Going clockwise, players take turns taking one action each, from the following:

Finally, you must eventually place a second bet token on an available space. Once you’ve placed your second bet token, you are done for this round and will not take any more actions.

The round ends when everyone has placed their second bet.

Reveal all of the action cards played on the gladiators. These may affect the gladiator’s skill levels. Note that a skill level may never go below 0. Comparing only the skills shown on the event card, add up the total skill levels for each team. The highest total wins first place, and the lowest total gets third place. In case of a tie, compare the other skills to break the tie.

At the end of the round, discard the event, gladiators, and influence cards, and reset for the next event. Each player draws 2 cards from their deck. The first player token is passed to the last player to place their second bet.

The game ends after three events have been resolved. Now all of the tokens on the podium cards are revealed, keeping them in stacks according to the round.

Any death bet tokens on the 1st Place podium are discarded. Each player scores the value of their betting tokens remaining on the podium card.

For the 3rd Place podium, each death bet token scores 2 points plus 1 point per opponent’s regular bet token on that same round. So you get more points for predicting the loser if other players thought they were going to win.

The highest total score wins; ties go to the player with the highest value of unused bet tokens.

There are some slight changes in the 2-player game: instead of the event cards, each player has a set of vote cards, which show the three different skills. In each round, the teams will consist of one gladiator each. After the gladiators are revealed, each player chooses one of their three vote cards and places it above the teams, face-down.

After the second bets have been placed, the two vote cards are revealed, and the teams are rated based on the skills showing. (If both players chose the same skill, then only that skill is rated.)

Why You Should Play Gladius

Gladius is for people who like to make bets on contests and then use underhanded schemes to influence those contests. On the surface, you’re just making friendly bets about which team is going to win (or lose), but then behind the scenes you’re hiring hecklers, poisoning the rival teams, or ponying up for some pre-match training, hoping to swing the odds in your favor.

One of the key things that makes this whole thing work is that the other players can see which teams you’ve bet on, and which gladiators you’ve played cards on, but they don’t know the value of those bets or what cards you’ve played. The death bets in particular can be used to mislead somebody. Are you rooting for that gladiator, or planning to tank them?

Most of the secret influence cards are what you’d expect: add or subtract from a particular skill, set a skill to 0, give a boost or a penalty to all three skills. The Mystic Healer will remove one negative card from a gladiator and serves as protection if you think they’re in danger. The visible influence cards, though, have a lot of wacky effects, letting you peek at influence cards or move them around, or even swapping out a gladiator entirely! That can really throw off the outcome, depending on which skills are in play, but there’s no guarantee that it’ll actually help you.

The player powers are also a lot of fun. You might not use them often, because it costs you cards, but a well-timed ability can make a huge difference. The Centurion has a mystery gladiator that he can swap in face-down, so nobody knows the stats until the reveal. The Senator can move her bet token if she realizes she’s backing the wrong team. The Biggest Fan can take a card from a gladiator and keep it in her hand, using it somewhere else later.

Knowing how many cards to play can be a little tricky. You start the game with a hand of cards, but you’ll only draw 2 at the end of each round, so you don’t want to use them all up in the first round. On the other hand, if you only play 2 per round, during the last round you might end up with 5 or 6 cards to play, making the last round a chaotic mess.

The sooner you place your 2nd bet, the more spaces are open: you might be able to double down on your first bet because you’re pretty sure you’ve secured its victory, or you can hedge your bets if you think an opponent has set up a different team to win. On the other hand, once you’ve placed that second bet, you’re done for the round, which means you can no longer control the outcome. If other players can guess what you’ve bet, they can still keep playing cards to foil your plans.

Deciding who to bet on can be a tough decision, and may depend on the types of cards you have in your hand. If you bet on the team that starts with the highest skill set, it seems like an easy bet, but there’s also a higher chance that other players will bet with you, so you’ll all score. Likewise, putting your death bet on the team with the lowest skill set seems like it would make sense, but it’s also less likely that you’ll get those bonus points from opponents who bet on them. Trying to bet against the base skills—death bets on the most skilled team, regular bets on the least skilled team—can be really rewarding if you can pull off an upset, but it can also be quite difficult to do.

The theme of the game reminds me a little of an old card game called Cheaty Mages, which featured mages betting on battles between mythical creatures. As with Gladius, these mages weren’t content to sit around and just spectate—they cast spells to influence the various creatures, but there were also judges who could cancel spells or even eject creatures if too many spells were cast. But though the theme is similar, the specifics of the gameplay differ. Gladius requires a little more hand management because you’ll only draw 2 cards at the end of each round instead of refilling your hand, and your player ability also costs cards to use. On the other hand, there are no judges in Gladius, so a gladiator can have any number of cards played on it!

Gladius plays pretty quickly once you understand the order of play, even with all the manipulation and second guessing. The three rounds give you enough time to start reading your opponents, but you won’t know exactly what they’ve been betting until the end of the game. While there’s certainly a bit of luck in the card draws—from the influence cards to the event cards to the gladiator cards—it’s really more about reading your opponents. I’d recommend it for people who like that experience of outwitting others, figuring out their plans and foiling them.

For more information or to make a pledge, visit the Gladius Kickstarter page! 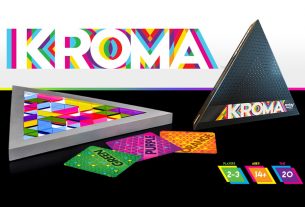