Ray: As Simon Spurrier’s run on The Dreaming comes to an end with next issue, he ties up a lot of his ongoing plots in The Dreaming #17 and delivers some of the most dramatic moments of the series.

Following the cruel reign of Judge Gallows, the Dreaming is now under the guiding hand of Wan, a child God with a very odd set of views about how to maximize the efficiency of the realm. They’re not as malicious as Gallows, but they may be more destructive. A series of events depicting how the real world is affected by the replacement of creativity with cold facts is chilling – especially for any creator who knows exactly how terrifying it can be to have your creativity stripped away suddenly. Imagine writer’s block for the entire world at once. It’s not a surprise that this drives some characters to extreme actions – including Lucien the Librarian to try to end his life, and Abel to lose his mind and attempt to murder Wan in cold blood.

Wan’s a fascinating antagonist, because they’re like a light switch. Their childlike innocence for most of the story makes it all the more jarring when their anger gets triggered and they flip like a light switch into an eldritch abomination. This leads to a tense pursuit as the dreaming collapses around them, but it also leads to a dramatic conclusion as a long-time resident of the Dreaming gets a powerful and emotional farewell with the entire cast showing up – including one of the most beloved characters in the history of the franchise making an appearance.

If I have one complaint about this issue, it’s that last issue’s dramatic reveals about Dora and Cain are completely ignored, leaving Spurrier only one issue to resolve them or hand them off to G. Willow Wilson, but Bilquis Evely’s art is amazing and brings this world to life in stunning fashion. Spurrier has taken on a near-impossible task of following Gaiman and has mostly stuck the landing. 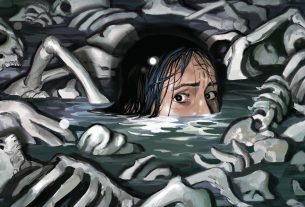