Ray: Things are back to normal after a trip into the realm of the Fae and a showdown with John Constantine, but things are anything but okay for Tim Hunter in Books of Magic #15. After the death of his evil teacher, Tim has a new history instructor whose mercurial attitude is bringing out Tim’s worst instincts. His former best friend Ellie, traumatized by her kidnapping, is forming an anti-magic alliance with friend Fatima and former rival Tyler. Even Tim’s mentor Dr. Rose is starting to become worried by her student’s increasingly sullen attitude and his willingness to use magic casually for revenge.

If the future evil Tim Hunter from the old Vertigo timeline was just a bad memory for Constantine, it now seems anything but as Tim is quickly slipping into bad habits and a stubborn refusal to seek any help. With no villains present in the first half of Books of Magic #15, it’s a good way to build tension before all hell breaks loose in the second.

That would be the arrival of the other Tim Hunter, the one who destroyed his world and pushed Constantine to his limits. The issue doesn’t explicitly say it’s him, but his actions, power levels, and attitude definitely make him seem as dangerous as the villain who tore his world apart. He wastes no time introducing himself to Tim, seducing him with promises of better control of his magic, and showing him just how much chaos – and control – he can have if he submits to the temptations of magic.

Tim is suitably won over, and continues lying to those around him. His evil counterpart makes one deal and plans for a betrayal. And the stage is seemingly set for our young hero’s descent into darkness. It’s an impressive reversal from the first arc that positioned Tim as a plucky underdog, and a compelling twist that makes this series one of DC’s most unpredictable. It hasn’t gotten the hype of some of the other books in the line, but it may be the most compelling. 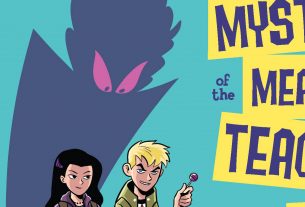