Ray: As Sean Murphy’s epic Elseworlds reaches the 2/3rd point of this volume with Batman: Curse of the White Knight #6, Batman and his few remaining allies find their backs up against the wall as Azrael and Joker lay waste to Gotham. Azrael is now in possession of a massive mechanized Bat-suit, a nice tribute to his 90s incarnation, and he wastes no time invading Arkham Asylum to free Joker. In the process, he nearly kills Harley Quinn and kidnaps her twin infant sons, forcing her and Batman to track them down and walk right into their trap.

While Batman and Joker get most of the hype in this version, I have to say Murphy’s version of Harley Quinn might be my favorite part of the book. She’s older, highly competent, and exactly the kind of flinty badass I’d expect someone who stared down the Joker and came out the other side to be. Even as a mother with her children in danger, she’s never allowed to fall into the many nasty stereotypes common to this plot.

The second half of Curse of the White Knight #6 is one big fight scene back where it all began, with Batman fighting his insane armored counterpart and Harley facing off against the maniac clown who is sharing a brain with Jack Napier.

Along the way, a series of crazy reveals about the truth of Edmond Wayne and Bakkar’s history come to light, and Jack and Joker battle for control – and Harley’s fate. The brief appearance of Jason Blood earlier in the issue is a surprise, and one that I could see leading to more stories down the line. There’s something supernatural lurking at the fringes here, and this series is growing its world more and more by the issue.

But right now, there’s still a lot of story to be told in this miniseries, and it all begins with a game-changing death at the end of this issue that makes clear who the real threat is in this story. Murphy’s been show-running this comic nearly solo from the start, and it’s evolving into one of the most promising Batman alternate universes in years.

Review – DCeased #6: Ends of the Earth 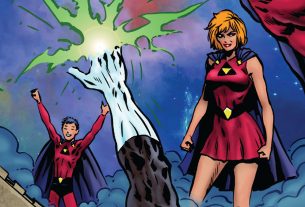