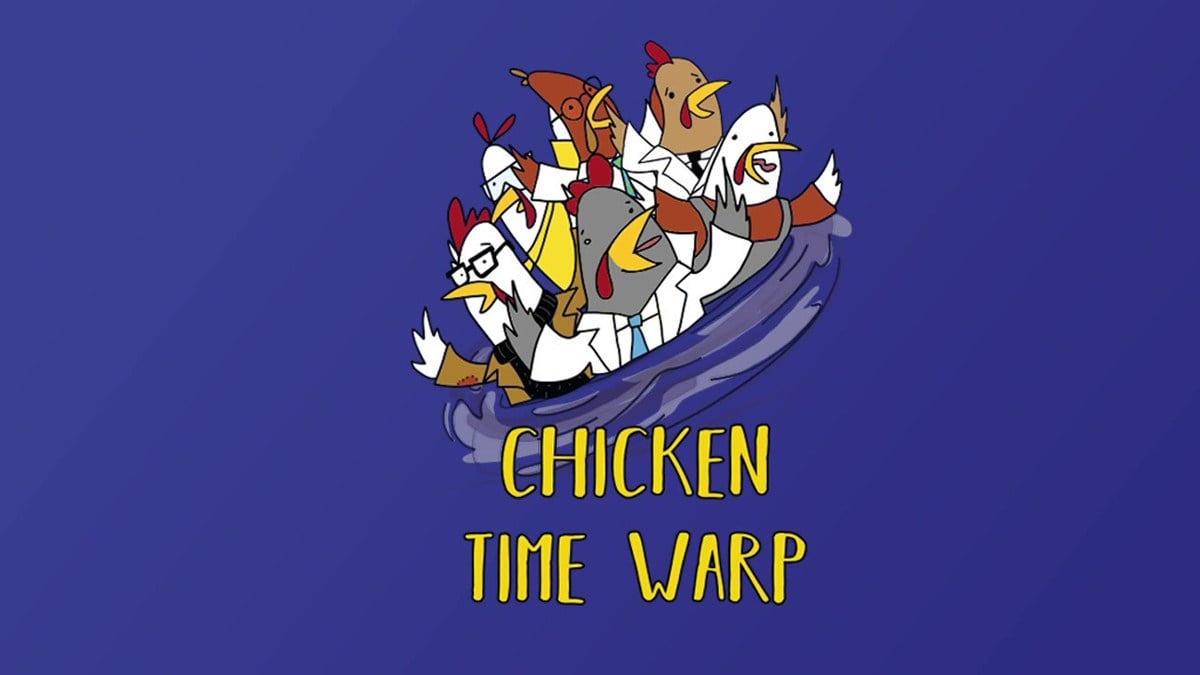 The bad news: they’ve opened a time vortex, and there’s only room for one chicken in the escape pod.

Who will survive this Chicken Time Warp?

What Is Chicken Time Warp?

Chicken Time Warp is a goofy card game for 3 to 6 players, ages 14 and up, and takes under 30 minutes to play. It was originally funded through Kickstarter in January 2019, and has since been delivered to backers and is now available for purchase from the website or other online retailers for $19.99. Although the box says it’s for 14 and up, the rules are easy enough that I’ve let my 6-year-old join in, though there’s a little bit of PG thematic content, which I’ll explain in the Components section.

Chicken Time Warp is purely a card game in a small two-piece box.

The cards are a nice quality with a linen finish, and the illustrations are a simple, cartoony style that goes well with the silliness of the game. The character cards depict several different chickens (mostly wearing lab coats), with names like Sarah and Disco and Sean X. The timeline cards are fairly plain: just a number counting down the minutes to the escape window with a swirly background.

The game play cards have a lot more funny illustrations, particularly on the “You Dead” and “Time Slips Away” cards, which make references to various time travel stories, from Back to the Future to Planet of the Apes, as well as tropes like “killed by future self” and “killed by future grandchild.” I will note that these do include some cartoon gore, guns, and a “Pissed Off Morlock” ripping a chicken’s head off, in case you’d rather not have your kids seeing that sort of thing.

How to Play Chicken Time Warp

You can read the rules on the website here.

The goal of the game is to find the escape pod and play it when the escape window is open—or, be the last chicken alive.

Give each player a character card. Lay out the timeline cards in order counting down from 10 to 1, ending with the “Escape Window Open!” card, and then turn all the cards face-down.

Remove the “You Dead” and “Time Slips Away” (black background) cards from the deck, shuffle it, and deal 4 cards to each player. Then shuffle the black background cards back into the deck. (Depending on the number of players, you use fewer “You Dead” cards.)

On your turn, you flip the next timeline card face-up. Then you may optionally play one card from your hand. Finally, you draw a card from the deck.

If you draw a card with a black background—”You Dead” or “Time Slips Away”—then you must play it immediately. You can counter a “You Dead” if you play a “Clux Capacitor” from your hand, but otherwise you place your character card next to the timeline showing the minute that you died. Also: if you happen to have the escape pod when you die, you have to pass it to the previous player in turn order.

“Time Slips Away” removes the highest timeline card from the game, and any characters that died at that minute are also permanently eliminated.

If you manage to play the escape pod when the “Escape Window Open!” card is face-up, then you win the game. Or, if you’re the only chicken alive, you win the game immediately.

Why You Should Play Chicken Time Warp

There’s no disputing that Chicken Time Warp is a very silly game: from the premise to the illustrations to the various ways you can die, it’s more about making you laugh than about telling a compelling (or consistent) time travel story. But that’s okay—the time travel theme is what piqued my curiosity, and I enjoyed the various references in the game, even if a lot of them are mostly there for flavor rather than gameplay.

The gameplay itself is, as you can see, very simple: play a card, draw a card, and hope you have the MacGuffin when all’s said and done. The trick is finding the MacGuffin (because there’s only one escape pod in the entire deck) and then hanging onto it until the window is open. You don’t want anyone to know you have it, of course, so it’s ideal if you can obtain it when the window’s almost open.

Several of the cards have to do with getting your hands on the escape pod: you can peek at a rival’s hand, swap hands with them, or demand a specific card from them, but keep in mind that other players will be waiting to do the same thing to you! Other action cards change the way you draw from the deck: using “Stock Pile” lets you draw more cards, but you’re also at more risk of drawing a “You Dead” card. “Mooch,” on the other hand, lets you take from the discard pile: you won’t get the escape pod that way, but at least you know it’s a safe card to take.

The “Clux Capacitor” is one of the most important cards in the game, of course. Not only does it allow you to cheat death, but its ability to rewind time is the primary way that time travel actually appears in the gameplay. I like the way that dead chickens can come back to life when you rewind time far enough. Rewinding is also important when you near the end of the timeline and you don’t have the escape pod yet: if you prevent the window from opening, nobody can escape without you!

There’s definitely a lot of luck involved in the game, but I didn’t mind because the game is pretty short (usually well under the 30 minute estimate). It’s simple enough that my 6-year-old joined in and has requested it as a before-bedtime game, and the movie references make me laugh. It’s a good opener for a game night because it’s quick to set up and play, though it’s not deep enough that I’d center a game night around it. As a bonus, the small box makes it great for on-the-go gaming: all you really need is room for the timeline to play the game.

For more information or to order a copy, visit the Chicken Time Warp website!