Ray: With Harley Quinn #67, Sam Humphries continues to deliver the most clever Harley run I can remember, fusing the surreality that’s become Harley’s trademark with a brilliantly human story that deals with the death of Harley’s mother.

Probably the best innovation of Humphries’ run is the Meredith Clatterbuck subplot, giving each issue a comic within a comic calling back to Harley’s crazier comic book adventures. This issue, that version of Harley is catapulting through time and space with Booster Gold, determined to bring an end to all Crisis events to prevent Luthor’s next plot. It’s kind of a harebrained idea, but what else would you expect from Harley? Get ready for a series of callbacks to Final Crisis, Infinite Crisis, and Crisis on Infinite Earths where Harley interrupts classic scenes to harass and confuse the heroes. The Dan Jurgens art on these segments is a nice surprise, calling back to the classic style of these events and perfectly capturing the designs of the heroes in those eras.

But this is all just a prelude to the real story of Harley Quinn #67, which finds Harley returning home to check in on her family after their loss. Her father has become a shut-in at his house, refusing to clear out any of his late wife’s things and barely aware of the day. Her two youngest brothers have begun acting out, with one engaging in petty acts of vandalism and the other shutting himself up in his lab and building science projects. Neither wants to talk about their mother – compared to their older brother, who has made her the centerpiece of his heavy metal act and even gotten a tattoo of her.

Harley’s attempts to put together a Thanksgiving dinner to reunite the family fall on deaf ears, so this issue is a surprisingly split affair. While the Jurgens segments are epic and exciting, the Basri segments are a painfully intimate look at a family that’s lost its anchor. This is unlike any other book on the stands, and the DC lineup is better for it. 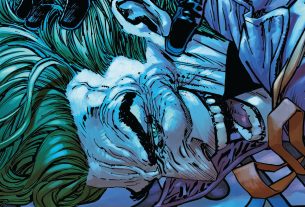 Review – The Joker #9: The Last Temptation of Jim Gordon