Ray: The most inventive crossover event out of DC in a long time wraps up in Black Hammer/Justice League #5, as Jeff Lemire and Michael Walsh deliver an emotional finale to the swapped fates of the Justice League and the residents of the Farm.

Last issue saw Mr. Mxyzptlk unmasked as the mastermind behind “the salesman”, and he trapped them in a sadistic choice. The foreign magic is ripping the fabric of the DCU apart, and the only way to fix it is for everyone to be restored to their proper place – but that would mean Golden Gail giving up her ability to return to her true age willingly.

Meanwhile, the Justice League members have decided to explore Madame Dragonfly’s cabin – never a good idea, as it quickly turns out to be filled with vicious beasts that threaten to overrun the farm. Michael Walsh is obviously having a great time on this book, getting to draw a whole host of supernatural beasts and magical beings.

It’s obviously preordained like with most crossovers that the table will be reset by the end, putting everyone back in their original place and largely ensuring no repercussions. But that doesn’t seem to be what Lemire’s script has planned, with the ending hinting that Mr. Mxyzptlk’s swap games gave caused a far bigger problem than the one in this miniseries.

The main plot is strong, but the series’ biggest strength is in its smaller moments. There’s some great one-liners about Aquaman, and the story does not shy away from the emotional ordeal of the Farm and what it’s done to the Leaguers. The book ends with the implication that the Justice Leaguers won’t remember this, but the last page promises future adventures. The entire Black Hammer universe is in flux right now after the conclusion of the last series, but it’s pretty clear Lemire has long-term plans for the universe. This crossover furthers its status as the best creator-owned superhero universe since Astro City. 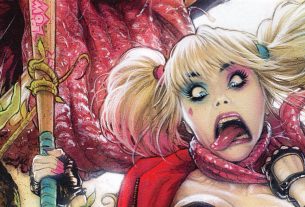 Review – DC Love Is a Battlefield #1: Ten Tales of Love