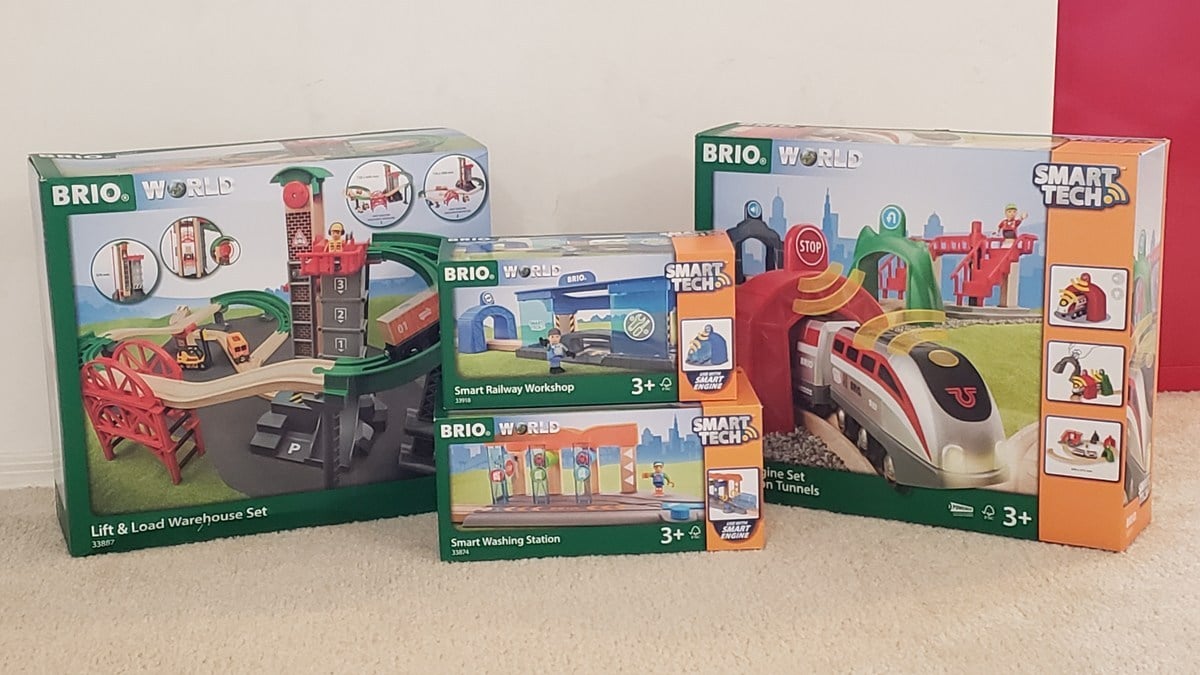 There’s a good chance that at some point in your childhood, you played with one of BRIO’s classic wooden trains whether you had a set or knew another kid who had one. Since BRIO’s first wooden train set came out in 1958, it’s safe to bet that a fair number of your parents might have owned or played with a set too. When our oldest, A, was 3, he got his first wooden train set for Christmas. The collection has grown over the years especially when W got old enough to play with trains. When a chance to receive some review items from the BRIO World line (the BRIO line that includes the trains) came up, I jumped at it. We received copies of four sets: the 33887 Lift and Load Warehouse Set (MSRP $99.99), the 33873 Smart Tech Engine Set with Action Tunnels (MSRP $89.99), the 33874 Smart Tech Washing Station (MSRP $34.99), and the 33918 Smart Tech Railway Workshop (MSRP $34.99). The sets are all rated for ages 3+, and our kids: A (age eight) and W (age five) were ecstatic at getting to test them all out.

First, we tried out the one set that was not Smart Tech related, the Lift and Load Warehouse Set. It’s a 32-piece set that can configure in four different ways.

The set comes with a nice diagram to help, but A did get a little overage and missed which level to set the elevator at and which stands to use since not every piece is used in every configuration. With a little guidance, he got it quickly set up. The multiple levels with the little elevator is super cool, and kids will clearly enjoy watching the momentum of the train moving from the top level down the sloping tracks. There’s a little stopper block at one end of the track, the perfect place for adjoining other tracks or sets you might have.

I would like to note that BRIO World sets are compatible with the other major brands so if you inherited a bucket of tracks from another kid or have a basic set from another brand on hand, you can easily combine these to make a bigger track and play area. Older kids will probably enjoy the idea of combining this with other sets more, but kids on the younger end will likely be entertained with this set purely on its own.

The Smart pieces are made with more plastic than the traditional wood, but still fit the classic wood pieces perfectly. The Smart Engine itself needs 2 AA batteries which are not provided. Once the batteries are in, the magic really happens. The Smart Engine has not just an on/off switch but buttons that tell it to go forward, backward, and stop. If it comes across an action tunnel, it will interact with it. The tunnels included let it stop, go the other direction, or make sounds. The platform area also includes a stop light that can be turned to allow the train to stop or go as well. The boys loved this set. It was quick and easy to follow the diagram to put it together, and once again, there was a little track stopper that can be traded out with additional track to expand later.

They were clearly into using the buttons and action tunnels to watch the Smart Engine come to life. Again, a younger kid might be perfectly content with this as a starter set, but older kids will want to add on to this for more fun.

When the blue knob is turned just right, the train moves to get washed up complete with little noises. Once done, it backs up, turn the blue knob and the train redirects to return back to the track.

The Railway Workshop includes the workshop, a little person, and an action tunnel. Again, there’s no real assembly, just connect it to another section of tracks.

When the Smart Engine goes through this action tunnel it makes broken down noises and goes to the workshop to be repaired, complete with little repair noises. Again, the boys love these little interactive features. There’s something about the train coming to life that just absolutely engaged them.

With the sets all out, A hunted down the piece from our pre-existing collection to connect the sets and the boys continued to play excitedly. The Smart Engine occasionally had some trouble with the slanted and tilted Lift and Load tracks because of its weight, but overall the boys still found a way to make it work.

The first day they had the sets, no one even asked about iPad time until after dinner and W sill wanted to play trains. Friday afternoon was heavily taken up with the trains. Saturday was mostly taken up with the boys making an extensive room size track with as many of our pieces as they could, including working in the new sets.

Overall, I feel like the little Smart Tech Engine has brought new life to our sets, and really kicked up how much the boys want to play with the trains. A is more interested in building the extensive and complicated tracks, using the trains to test out if there’s things like too many sharp turns etc. W loves when the train actually gets going with a set. I’m impressed at how much the boys have been prioritizing trains over iPads or TV time. I feel like the Lift and Load set is another great interactive section for our collection, and watching the train pick up speed as it slides down is really run.

Some parents will note that BRIO World sets aren’t the cheapest, but we have always selected toys on the philosophy that we would rather buy a handful of more expensive, quality toys that really last than cheaper stuff kids are bored with quickly. BRIO World items are durable, we haven’t had one break yet, and odds are good that we will eventually store these for future grandkids. They’re an interactive toy that really encourages creativity as kids try to invent new track layouts. There’s also practical science lessons involved including why you can’t have lots of narrow turns with long trains. The fact there’s new BRIO World items every year means there’s always new additions to help your kids play in more ways. If your kids like things that roll or have ever entered a toy store and gone straight for the demo train, invest in some BRIO pieces and I think you’ll find why they’ve been a kid favorite for such a long time. You can buy these sets and others to supplement them from BRIO directly, look up a BRIO retailer near you, or check out the BRIO selection on Amazon.

Click through to read all of “Toy Review: ‘BRIO World’s’ Trains Are a Classic for a Reason” at GeekMom.If you value content from GeekMom, please support us via Patreon or use this link to shop at Amazon. Thanks!

Celebrate Dr. Seuss’ Birthday with PBS KIDS’s THE CAT IN THE HAT-A-THON