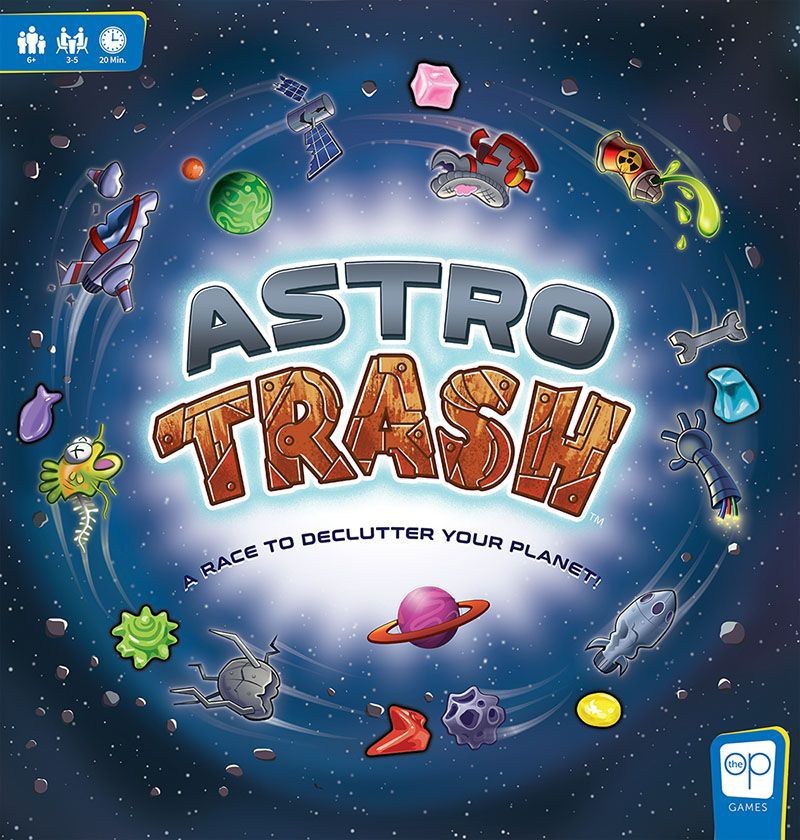 Everyone’s planet is covered in trash: time to clean up your planet. Sometimes the best way to do that is to send it to your neighbor! Let’s get ready to clear some Astro Trash!

What Is Astro Trash?

Astro Trash is a real-time dice game for 3 to 5 players, ages 6 and up, and takes about 20 minutes to play. It retails for $19.95, and is available at your local game store, or from online retailers like Amazon and Target. The game is fairly easy to learn, but also includes some ways to make it easier for younger or less-mobile players, since it’s a speed-based game and requires a bit of dexterity.

The sun and planet boards are large round cardboard disks—the sun a little larger than the planets—with colorful illustrations on them. Each planet has its own distinct look to it, though there’s no gameplay difference between them.

The trash trophies are also cardboard tokens, each showing a bit of space trash flying through space. It’s a little funny that, in a game about getting trash off your planet, you’d want to collect trash trophies, but the bits of junk are cute anyway.

The star of the show here, though, is the trash pieces. They’re molded plastic components, and there are six different types of trash, each with a different color and shape, so they’re easy to distinguish even for color blind players. The one thing I’ll note is that some of the bits can be harder to see on particular planets—for instance, the yellow circles blend into the yellow and red planet, and the purple fish can be hard to see on the purple planet.

Finally, there are three different types of dice: the first has numbers from 1 to 3; the second has L, R, a sun, and ?; and the last has the six different trash types, represented again with color and shape. The dice are engraved and painted, so the ink is less likely to rub off.

Overall, the components are really nice: the planet boards are nice and big, and it’s a fun, colorful game with a nice table presence. The weirdly shaped trash tokens are fun to handle—some of them (like the yellow circles and the green spirals) are a little harder to pick up, which seems intentional as well.

How to Play Astro Trash

The goal of the game is to collect three trash trophies by clearing your planet of trash.

Simultaneously, everyone rolls their own set of dice. The number and color dice indicate how many of what type of trash you can clear from your planet, and the location die tells you where to send it. R and L mean right and left; the sun means you put it on the sun board; the “?” means you get to choose the location. After getting rid of the trash, or if you don’t have the type of trash indicated by your dice, then you re-roll all three dice—you don’t wait until everyone is done, and there are no “turns.”

The round ends when any player has cleared all of the trash off their planet. They shout “Clean!” and the round ends, and that player collects a trash trophy.

Here are two (sped-up) games so you can see how it looks in action:

After the end of a round, reset all the trash tokens on the planets, and start again.

The game ends when a player has claimed three trash trophies, and wins the game!

Why You Should Play Astro Trash

I happen to love real-time games, whether they’re cooperative or competitive, but my gaming group tends to shy away from them. They groan and shudder any time mention “real-time”—especially real-time cooperative games, and so it’s always a delight when I come across one that they actually enjoy. Astro Trash is one such game, and we’ve had a lot of fun flinging trash at each other. Playing a round of Astro Trash takes just a few minutes, but it feels like a workout! I watched the videos of myself playing the game afterward, and I was surprised by how slow I looked, because while playing it feels like you’re racing.

The game itself is very simple, and a little reminiscent of the old dice-and-chips game LCR, but the simultaneous play adds a fun new wrinkle to it. You just roll the dice, and move things around according to the dice, as quickly as you can. I’ll admit that there’s not a ton of decision-making involved and it’s more about dexterity and speed. The only choice you make, really, is when the “?” comes up on the direction die: do you dump it in the sun so that there’s no risk that it comes back to you, or do you give it to a neighbor to slow them down? Those precious few seconds it takes to glance left and right to make a decision might be enough for somebody to pull ahead (or dump a few more pieces of trash onto your planet).

There are a couple of clever things going on, too: because some of the trash gets flung into the sun, there’s less and less trash to go around as the game progresses. That helps prevent this from becoming an infinite game, where the trash just gets shuffled around and nobody ever wins. The other thing is that if you’re ahead because you have less trash on your planet, it’s also harder to get rid of the last few pieces, because you have more dice rolls that don’t match up with what’s left on your planet.

The two caveats I’d give: if you have some wild dice-throwers in your group, you may want to provide some dice trays or box lids so the dice don’t go flying. (The gaming table has a lip, so that helps significantly for me.) Also, it’s not a game that will work as well for players who have mobility difficulties, so it’s not as accessible in that regard.

It’s silly, frantic fun, and we’ve played with a mix of kids and adults (even my 6-year-old joined in, and it was easy enough to teach her). There are rules for simplifying the game for younger players: you can leave out the color die so that they’re allowed to pick up any type of trash, and they just use the number and direction dice. You can also handicap the game: each time a player doesn’t win a round, they start with 1 fewer trash on the next round. That allows players of different skill levels to play together and give everyone a chance to compete.

Astro Trash isn’t a game that I’ll use as the focus of a whole game night (and, honestly, it can get tiring playing more than one full game in a row), but it’s definitely one that I’ll have ready to pull out in between longer games, or to kick off or close out a game night. It’s been a crowd-pleaser at my house, and it’s also one that’s fun to watch other people playing. If you’re a fan of real-time games or dice-chucking, you may want to give Astro Trash a spin! 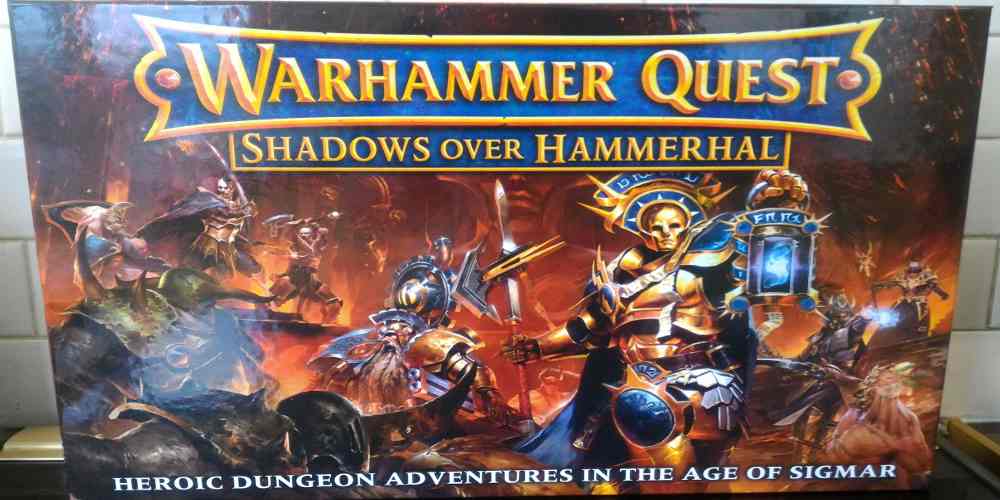 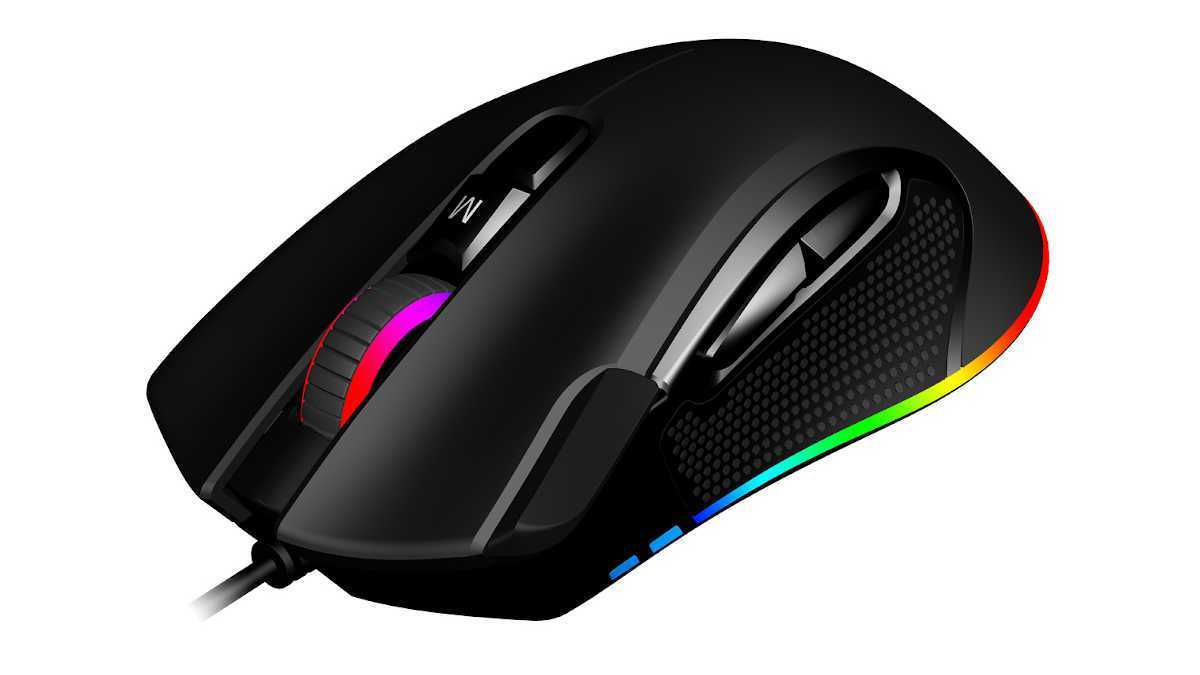 2 thoughts on “Clean Up Your Planet: ‘Astro Trash’”