With the recent explosion in the number of individual streaming services available, it can be a little difficult to stay on top of them all. Personally, I haven’t yet had a chance to check out DC Universe, DC Comics’ dedicated platform, though its original content definitely appeals to me. But before Swamp Thing and Doom Patrol, there was DCU’s first big live-action serial, Titans. This dark, frenetic retelling of the origin of junior super team the Teen Titans—more specifically, a stripped down version of it’s stellar 1980s reintroduction—is now available on Blu-ray, DVD, and digitally, complete with all 11 episodes and loads of bonus material, with no subscription required.

Titans‘ initial reveal was something of a mixed bag. After originally being teased as a TNT production back in 2014, the project was a perennial no-show until Turner’s interest finally fizzled in 2016, only for it to be re-announced for DC Universe in 2017. What followed was online fan rage galore regarding a non-green Gar “Beast Boy” Logan (played by Big Hero 6‘s Ryan Potter) and no small amount of unkindness aimed at Senegalese-American actress Anna Diop as Starfire, otherwise known as Princess Koriand’r.

The official Titans trailer, however, is most infamously remembered for Brenton Thwaites’s Robin uttering the immortal line, “F— Batman!” (You’ve been warned.)

As you can tell, this ain’t your father’s Titans.

That said, despite its overall grim-dark tone—complete with graphic violence and f-bombs galore—Titans‘ first season actually manages to weave a compelling tale about young, impressionable, corruptible heroes in a world where even top-shelf supers like Batman often waiver. This is due in no small part to its strong central cast.

Thwaites’s Dick Grayson, orphaned by his acrobat parents and adopted by Bruce Wayne, struggles to move out of the shadow of the Dark Knight, eventually relocating to Detroit (which I guess is the real world Blüdhaven?!) to start a life as a police detective/part-time vigilante. Ryan Potter’s Beast Boy oozes goofy charm as a more limited incarnation of our favorite metamorph, and Diop as Kory manages to command practically every scene she’s in as an amnesiac Tamaranean princess.

Rounding out the team, and also at the very heart of season one’s overarching plot, is Teagan Croft as Rachel Roth/Raven. Our beloved demon spawn and mythical empath is the youngest cast member, barely in her teens during initial filming, but more than holds her own in the dual roles of emo high-schooler and her own dark reflection.

Fans of the series proper will no doubt see where the story is going—specifically, to the invocation of Raven’s dad, the otherworldly Trigon—but how it gets there is both novel and engaging.

There are also ample side plots that bring in even more names from DC’s comic canon. We meet the Doom Patrol, new Robin Jason Todd, vigilante duo Hawk and Dove, former Wonder Girl Donna Troy, and even the Batman himself. Each, of course, is saddled with their own angst and anger, as is the order of the day in Titans. Yet, similarly, they help to add color (mostly shades of grey) and texture (often rough) to the tapestry that is a solid first showing for a super team that’s seen no shortage of reboots, reinventions, and regular retreads.

There are distractions, too, often in the form of uneven digital effects and bleakness for its own sake (including a particularly harsh abuse subplot in episode 9), but overall, Titans manages to satisfy. Just don’t come in expecting Teen Titans, Young Justice, or any of the other previous television tellings of the Titans timeline.

If you missed the show’s DC Universe release or simply want to revisit this new chapter in Titans lore, The Complete First Season is picture perfect. It looks gorgeous on Blu-ray, with its marvelously moody cinematography, and its bonus features, while a little on the short side, do provide some added context about the show’s decidedly dark turn.

Titans: The Complete First Season is available now on Blu-ray, DVD, and via your digital storefront of choice.

Review materials provided by Warner Bros. Home Entertainment. This post contains affiliate product links, and purchases made using those links may generate a small commission for me, your humble blogger. 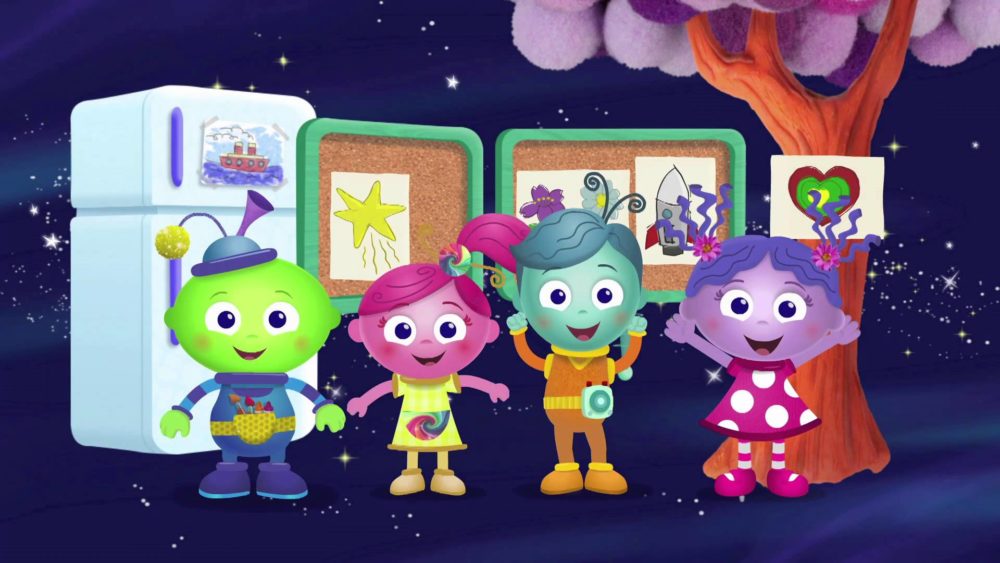 ‘Creative Galaxy’ Returns for a Second Season of Arts and Creativity

Review – Wonder Woman: Come Back to Me #2: The Island that Time Forgot