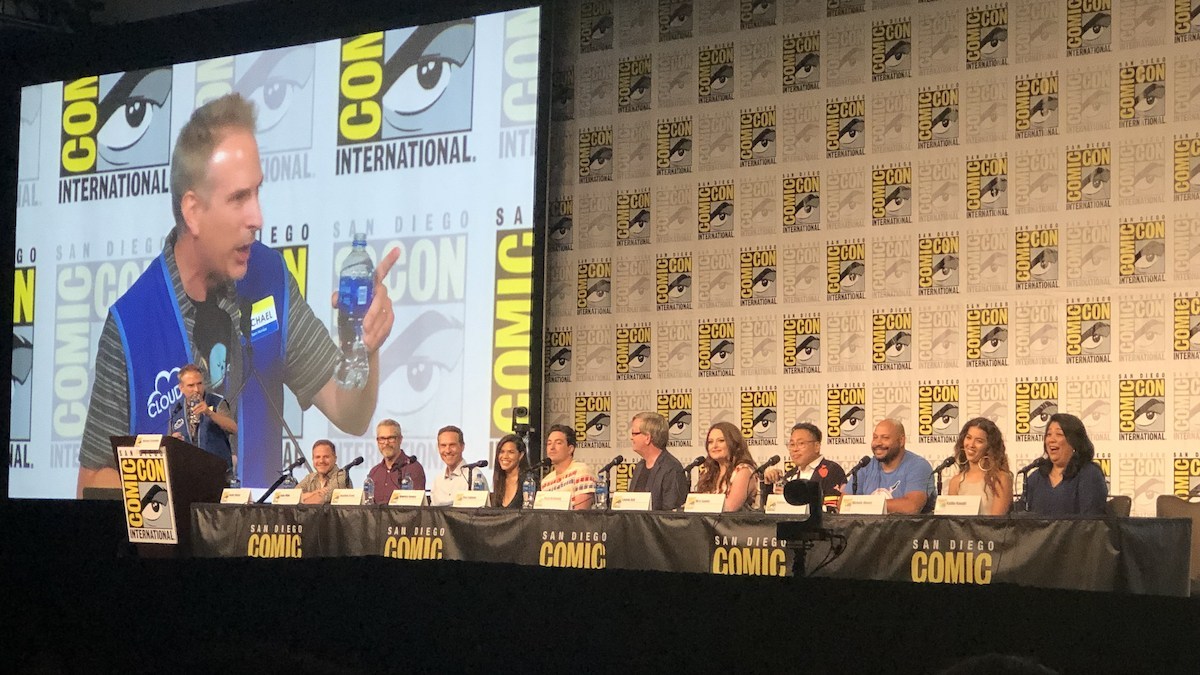 My mission, should I choose to accept it: convince fellow GeekMom readers that if they aren’t watching NBC’s Superstore, it’s time to start.

At first glance, the NBC comedy Superstore might have seemed like something ridiculous. We make fun of Walmart enough, don’t we? What could possibly draw viewers back to the comedy week after week?

While at San Diego Comic Con last week, NBC Comedy pulled out all the stops to drum up support for their biggest comedy hits: Brooklyn Nine-Nine, The Good Place, and Superstore. I had a great time exploring the Brooklyn Nine-Nine activities, but learning about the planned Superstore-related attractions led me to reach out to NBC to request press access to see their takeover of the Hard Rock Hotel in San Diego’s Gaslamp Quarter.

NBC turned the lobby of the Hard Rock Hotel into Cloud 9, the discount department store that serves as the primary setting for Superstore.

There was another area dedicated to the Cloud 9 mockup, but guests needed a special NBC wristband to see it.

Just by walking into the Superstore Pop Up at the Hard Rock Hotel, you will earn Employee of the Month! @nbc @nbcsuperstore @comic_con @geekmomblog #superstore #sdcc2019

The Cloud 9 mockup in the lobby also had shelves with products: Easter eggs paying homage to other NBC comedies. Let’s see if you can guess which shows featured these products:

During another part of the weekend, I was in the Hard Rock Hotel to conduct my interview with the cast and crew of SpongeBob SquarePants. Walking out after the interview, I literally ran into one of the Superstore cast members: Colton Dunn, who plays the snarky-but-loveable Garrett McNeill.

When you LITERALLY run into Colton Dunn from @nbc’s Superstore on the street outside the Hard Rock Hotel. He was kind enough to wait for me when I accidentally took the photo facing AWAY from us! #fangirlmoment #sdcc19 @geekmomblog @comic_con

In addition to the life-sized attractions for the fans, eight members of the cast and three executive producers participated in the Superstore panel on July 18th. I was fortunate to get a press seat in this full-house event. During the panel, there were several discussions about the higher-order topics that the show writers have been bold enough to cover. This is why America needs this show!

A Subtle (But Important) Message

America Ferrera, the Emmy-winning star of Superstore, was introduced in the panel with all 28 of the name tag names worn by her character, Amy Sosa, during Season 4. Rather than list them here, I’ll just share the video I took of the list of names.

This was explained in the show’s pilot: Amy has a problem with strangers—store customers—just walking up to her as if they’ve known each other forever. To quote from Season 1, Episode 1: “I just don’t like random strangers using my name like we’re buddies.” Therefore, with very few exceptions, Amy’s nametag was a seemingly random different name during all four seasons.

This is an age-old question in the service industry: does wearing a name tag really help customer service? Forbes.com addressed this question several years ago, and many of the same concerns stand now. Many people, especially among millennials, don’t care for their names being plastered across their chests. It’s a privacy concern.

The panel moderator asked America Ferrera, “Who decides what names are on your name tag?” It turns out it’s a combination of the writer and cast member selections as well as some social media inputs.

This is the cornerstone of the show’s success: not only is the cast from a diverse variety of backgrounds, but the topics being tackled are also diverse. Similar to what we have seen on other NBC comedies such as The Office and Parks and Recreation, the variations in backgrounds, value systems, and morals helps to weave a tapestry of storytelling. The audience is drawn in to have sympathy and laugh alongside all of these characters as well. There will be characters who don’t align with what we believe, but we will still enjoy their company week after week.

To America Ferrera, representation is a topic incredibly near and dear. She said during the panel, “We can’t explore issues if we all look the same.” In fact, in May 2019 she gave an incredibly personal, poignant TED Talk about representation and identity. I highly recommend watching it, it will provide a nice backdrop to the influence Ms. Ferrera is contributing to Superstore:

Exploring some of the recurring storylines will serve as a testament to the diversity of the characters on Superstore. Longtime fans of the show will certainly be familiar with how religious Glenn is. Amy never intended to work at Cloud 9 for long, she considered working at a discount department store a lesser job, but life got in the way. Cheyenne may not be the brightest bulb in the room, but no one will doubt her kindness towards everyone. And when Cheyenne and Mateo have an idea together, you know the two of them are thick as thieves. Sandra has been bullied for nearly two seasons by Carol, but by the end of Season 4, Sandra perseveres.

A fellow Hawaiian asked Kaliko Kauahi, the actress who plays Sandra, how a native Hawaiian was able to be cast in a comedy show that’s set in the American midwest. Ms. Kauahi responded that she didn’t give that much thought, but then admitted that most of the other native Hawaiians on television have been more likely cast into action and drama shows, such as Hawaii Five-O.

This past season, some backstory about Jonah starts to come out when his parents come into the store and begin to leak facets of his privileged past, including that they still believe Jonah is in medical school! What’s he doing working in a discount department store? The panelists at SDCC revealed that Season 5 will be digging a little deeper in Jonah’s privilege and ongoing rebellion.

Then we have Marcus. Marcus is the warehouse supervisor who has a propensity to push buttons. The Halloween episode comes to mind, when Marcus wears a Rastafarian costume, prompting a conversation about cultural appropriation (a timely topic). Towards the end of the season we find out that he’s been living in the store after hours, effectively homeless, and the only one who knows his secret is Mateo. The two promise to take care of each other.

The Elephant in the Room

The big cliffhanger in the series right now is Mateo immigration status. Very few people knew his citizenship status, but during a series of crackdowns related to the Cloud 9 employees pursuing unionizing, the fact that there were undocumented workers at Store #1217 was revealed; ICE was sent in to retrieve Mateo in the Season 4 finale.

Talk about a bold move for a comedy! The actor who portrays Mateo, the talented Nico Santos (who you might have seen in Crazy Rich Asians), discussed what it was like to film those season finale scenes. He was asked what it was like to be carted off in the “ICE Mobile,” and Santos’ answer was “very personal.” As an immigrant himself (Santos moved to Oregon from the Philippines when he was 16), he told us about how tearful the table read was, and how “triggering” the scenes themselves were. He expressed love and gratitude towards his fellow cast and crew for working through those scenes with patience and compassion.

Will Mateo be deported? Santos told the room, “I’m here, that’s a good sign, right?” But I don’t think it’s going to be an instant resolution. It was revealed that the next season will dig deeper into the deportation process while the audience is left wondering Mateo’s resolution.

The executive producers made it clear that they want to bring attention to the immigration issue, and they are very excited about being able to use Superstore to continue the national conversation about it.

I Learned a New Word: Interstitial

Merriam-Webster defines “interstitial” as “occurring in or being an interval or intervening space or segment.” For Superstore, these are the most hilarious scene transitions I’ve ever seen. Here’s 17 minutes worth of Superstore‘s 2-to-5-second-long interstitials, made up just in time for SDCC, featuring customers doing some outrageous things.

The panel was asked where the ideas for the interstitials came from. Both the executive producers and the cast members offered up some of their contributions. America Ferrera told us that one of them came from a photo she had taken in a Target of a couple doing their taxes in the store!

Did I convince you that it’s time to make Superstore part of your television diet? I sure hope so! Catch up now on Hulu so you are ready to watch for Mateo’s fate! Season 5 will be starting on Thursday, September 26th on NBC. And if you’d like to catch the full San Diego Comic Con panel, NBC hung it on their Superstore website.

Click through to read all of “SDCC 2019: Why ‘Superstore’ Is the Comedy We All Need Right Now” at GeekMom.If you value content from GeekMom, please support us via Patreon or use this link to shop at Amazon. Thanks!