Ray: The conclusion of “The Flash: Year One” has a lot of heavy lifting to do as it wraps up the flashback tale and brings in some major fallout to the present day. The opening half of the issue, drawn by regular series artist Howard Porter, covers the big fight with the Turtle – or rather, Turtles past and present. As Flash #75 starts, all of Central City is enslaved by Turtle with the goal of draining their energy to boost his power levels. But Iris is able to destroy his computer system and free them, letting the citizens fight back and giving Flash the chance to resist his control and turn the tide. Eventually Flash is able to pull a tricky stunt with the Speed Force to destroy Future Turtle’s powers and close the time loop – spelling an end to future Flash as well – and Flash is firmly established as Central City’s brightest new hero. The scenes with the city celebrating Flash remind me of the best scenes from Spider-Man 2, and the characterization of Iris in this arc continues to be the best of the run. As we return to the present, this has been one of Williamson’s best arcs.

The two backups work almost as well, with the first being a direct follow-up to the flashback arc and returning Barry to the present. There, he encounters a mysterious figure named Steadfast, the current bearer of the Still Force. He looks like an ordinary guy, but his control over this cosmic power is far greater than even Turtle’s (who uses it as an offensive force). The story seems designed to restore Flash’s equilibrium, remind us of his status quo after three months, and it does a good job with the alliance between Flash and Commander Cold.

The Captain Cold-themed story that follows shows how the character transitions from the Suicide Squad where we last saw him (in one of the best Squad stories in a while) to putting the Rogues back together. It also serves as the required Year of the Villain tie-in, with Luthor giving Cold the upgrade he needs and him negotiating the same package for his whole squad. It’s a strong oversized package that celebrates the best this run has to offer. 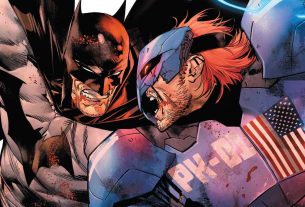