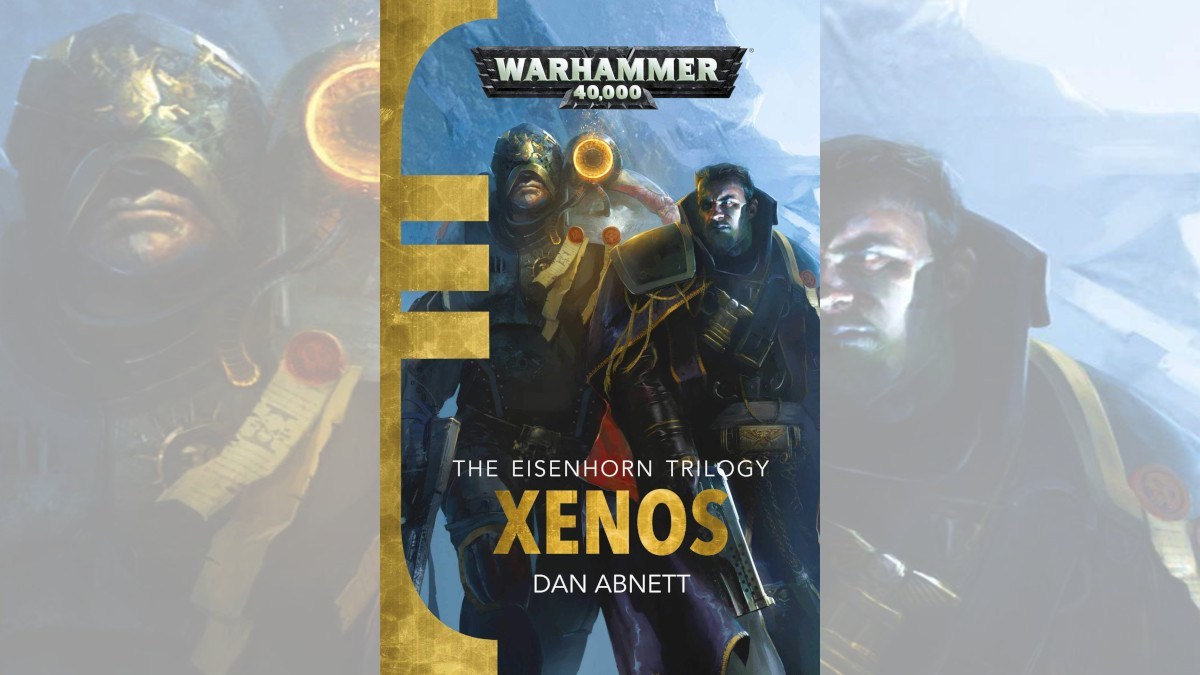 Xenos is not a new book. It’s considered to be a classic of Warhammer 40,000 fiction. I recently reviewed the Black Library’s new series of books aimed at middle-grade readers, Warhammer Adventures. I enjoyed the books greatly. Something, as I mentioned in my review, I have always failed to do when reading Black Library’s books for older readers.

Perturbed by my lack of faith in the Emperor, the team at Black Library challenged me to read a couple of more of their books, sure that I would like them. I’d heard that the Eisenhorn trilogy is extremely highly rated, so that felt like it a good place to start. I was not disappointed.

Whether you play Warhammer or not, here are 5 reasons why you should read it.

1. It Works on a Personal Level.

Whilst being set in the sprawling multi-faceted Warhammer 40K universe, this is a personal tale. Eisenhorn is an Imperial Inquisitor. As the book opens, he has tracked down his nemesis, and they fight in mortal combat. Despite opening with an ending of sorts, Xenos continues with what Eisenhorn does next. Following up on loose ends from having slain his enemy, Eisenhorn and his group of trusty followers embark on a mysterious journey that will take them deep into the belly of the enemy.

Xenos has a small-scale ensemble cast and is an epic quest novel. A quest will thrills, spills, and unexpected turns.

Many Black Library books can’t bear the weight of Warhammer lore. All too often, the huge sprawl and expectation of this much-loved universe overwhelms its novels. Possibly, some of this is Dan Abnett’s fault. Xenos is 10-15 years old, and has probably informed the lore of the universe and the expectations of its readers. In the books I have read, in-game terminology and too much “telling” and not “showing” have made the stories very clunky. In Xenos, Abnett interlaces his lore delicately. Whilst there are some fairly obvious 40K influences, for those in the know, they’re mostly in the background. It would be possible to read Xenos without ever realizing it belonged to a massive pre-existing universe. Similarly, if the rest of the 40K universe ceased to exist, Xenos would still function as an exciting quest novel.

An extension of reasons 1 and 2. All too often the Black Library novels buckle under the weight of the military might behind them. Huge sprawling battles of proprietary named troops, ranks, and weapons. This does not make for flexible interesting storytelling. Whilst references to the Imperium and the wider 40K universe do exist inside Xenos, they are incidental and don’t deflect from the central quest.

Ok, there’s a MacGuffin, which is perhaps not the definition of tight plotting, but leaving that aside, Xenos has thrills and spills aplenty. There are hidden agendas and mixed motives. There are obvious bad guys and less obvious bad guys. There are twists and turns, and all of this makes you want to read on. Even at the very end of the book, there are unanswered hooks that demand that book 2 in the series (Malleus) be read.

Probably my best reason for reading this book over other Black Library books. Whilst the language does tend towards the flowery (the word ‘lambent’ turns up a few too many times for my liking), Abnett avoids the trap that many of his Black Library colleagues fall into. That of using multi-syllabic words when simpler ones would do. This makes the book much more readable. Having to refer to your dictionary every five minutes breaks your concentration and pulls you out of the story, but that never happens in Xenos.

Xenos is a great entry into Black Library fiction if you are looking to find your way into the world of Warhammer 40,000 novels. Equally, if you know nothing about Games Workshop or Warhammer, Xenos is still a great novel. Whilst it is informed by its setting it is never overwhelmed. Xenos is an interesting story, well-told and I’m looking forward to reading part two, Malleus.

If you’d like to pick up a copy of Xenos, you can do so here, in the US, here, in the UK, or direct from the Black Library, here.

Look out for my second Black Library review of Honourbound by Rachel Harrison, soon.

Disclosure: Many thanks to the Black Library team for sending me a copy of Xenos.