Corrina: From the Personal to the Politcal

Ray: Mark Russell is a guy with a lot on his mind. Every one of his eclectic books for DC and other companies has tackled a variety of social issues, and it seems Wonder Twins will be no different. This issue immediately jumps right into tackling the prison-industrial complex and the supervillain recidivism rate – because while we didn’t know Lex Luthor ran private prisons until now, it makes total sense that he does, doesn’t it? A small-time villain with the very powerful ability of body-swapping breaks out and seeks to join the Legion of Doom – only to be sent over to the farm team, the Legion of Annoyance. At the same time, Zan and Jayna’s class field trip is derailed to a Luthor-run prison instead of the planetarium – giving the young heroes a first-hand look at just how screwed up the DCU justice system is. While this comic is making some very good points about our real justice system, I’m not sure it passes the smell test for me that this is how the heroes allow the world to be run.

This comic feels less like a smooth narrative than a series of vignettes. We get a focus on the villains, including a particularly hapless recovering alcoholic vampire who everyone calls by the derogatory name Drunkula. Zan and Jayna are teamed up with veteran teen hero Beast Boy to learn the ropes, which leads to some hilarious discussions about how their powers work. I like the characterizations here, with Jayna being the more curious and skeptical one of the two while Zan is taken in by the possibility of becoming a celebrity superhero. But these kids are still kids, and their attempts to become superheroes don’t go smoothly. The events that unfold at the end of the issue are surprisingly dark and a dose of reality among Stephen Byrne’s colorful, largely comic art. As a six-issue miniseries, this comic has a lot of great ideas but I’m not sure it has a clear narrative yet. It’s also fun enough that I’m excited to follow it to the end.

Corrina: Russell’s work with DC has always had a distinct political view, from the prescient Prez to the Snagglepuss Chronicles to the Flintstones. But he’s been at his best when the story also relies on humans, rather than strict satire. The first issue of this series gently poked fun at superhero storytelling conventions. Wonder Twins #2, however, is more interested in a political commentary on the criminal justice system. It’s a dead-on satire, spotlighting many real problems, but it’s paper-thin so far as characterization goes.

It reminds me of a few issues of the Flintstones that focused on the “slavery” of the domestic appliances. That was sad but because it wasn’t part of reality, and the “creature appliances” were just ridiculous, it worked without seeming cruel or tragic. But here, with Drunkula killing all his cell-mates, we’ve taken a turn to the very dark and almost cruel.

I’m not sure that benefits what seemed to be a light-hearted (but biting) satire on real-world events. 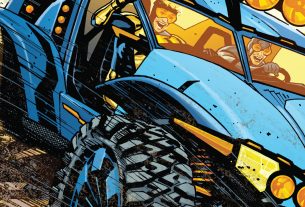