Corrina: What an Awful Depiction of Parenthood

Ray: In many ways, this was going to be the make-or-break issue for Brian Michael Bendis on the main Superman title. As we saw at the end of last issue, Jon Kent is back from deep space – but he’s a teenager now, having had a sudden growth spurt in the vein of classic TV/comic kid characters like Conner from Angel or Cassie Lang from Marvel. How Bendis handled that was going to play a big role in winning over the crowd – and from this issue, I have to say he did a pretty good job. The opening dialogue makes clear that Jon is around 17, and it’s not any sort of artificial age-up – he spent seven years in space with his grandfather. But what works here is that all the family dynamic feels genuine. Jon comes off less as an edgy aged-up superhero than a kid coming back from summer camp with a lot of stories. Lois and Clark zig-zagging between relief that he’s back and freaking out at how much they’ve missed is the best they’ve been written so far in this run, especially together. I’m just hoping this new family dynamic is sticking around long-term, rather than shipping Jon and Lois off again.

The story is split between this reunion, and flashbacks to Lois and Jon’s time in space. The art can feel a tiny big jumbled due to three different artists on the same issue, but Brandon Peterson is a good choice to depict the deep-space segments. Jor-El continues to be a creepy, suspicious mentor who obviously has hidden agendas, and the decision by Clark and Lois to let Jon go off into space still doesn’t sit right with me – the issue even lampshades that with Jon barely remembering why he was so upset that he wanted to leave Earth. But Bendis does some interesting things with the way Superman has essentially become a messiah figure for countless societies due to his good works. Seeing Jon come into his own as a hero by liberating his first society is great, but Lois’ reasoning for leaving feels thin – neither of these parents should be nearly this trusting of Clark’s crazy father. Do we not remember him committing countless acts of destruction on Earth? That hole aside, I had a lot of fun with this issue and I’m excited to get to know this new Jon Kent. Clark now has three teenage Kryptonians to mentor. This should be interesting.

Corrina: Perhaps my perspective from Ray is different because I’m a parent and he’s not but, once again, I have to put out the awful ridiculousness of this entire premise of Jon going anywhere with his grandfather.

This Jor-El is a mass murderer who was introduced as a force behind wanting Superman to entirely lose hope in humanity. Jor-El never apologized for it, he was never held responsible for those deaths. So the idea that Lois and Clark would do anything but drive him off Earth or lock him up with some Kryptonite while trying to understand him is absolutely ridiculous.

Even more so, that these two supposedly responsible parents would let their son go off with a homicidal maniac who they barely know suspends belief. Just because someone is a biological relative does not make them automatically trustworthy. Most damage done to children is by someone they know, which Clark and Lois should know, and, besides, have I mentioned the murderous part of Jor-El?

Lois going with Jon makes some slight sense but then she’s like “Oh, hey, Jon, you’re like 12, so I’m just going to leave you in deep space with the homicidal Grandda and head off back to Earth and, once I get there, I’ll just not tell Clark I’m back for a bit because…LOL, I’m working and I feel like it.”

What the what, writers? What the what, DC? That’s bad parenting beyond anything Batman has ever been accused of doing, like letting underage kids fight in Gotham. At least he’s with them and at least he’s on Earth!

I guess it’s nice Jon hasn’t lost his optimism. There’s one good scene in the story, where it’s driven home to Lois how much the House of El is revered in the universe. But, even there, I’m not sure that would bother her as much as it does. She, more than anyone, knows what Superman means. And that burden of heroism would be all the more reason for Lois to stick around and NOT LEAVE HER SON WITH THE HOMICIDAL MANIAC.

This is simply horrible characterization, right up there with DC deciding that the Amazons, who supposedly taught Diana about peace and compassion, turning out to be rapists and killers who sold off boy babies into slavery. 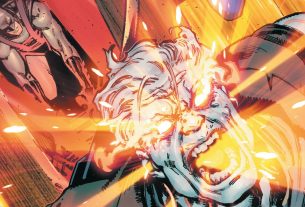 Review – Batman/Superman #15: Born on a Monday

2 thoughts on “Review – Superman #7: The Journey of Jon Kent”