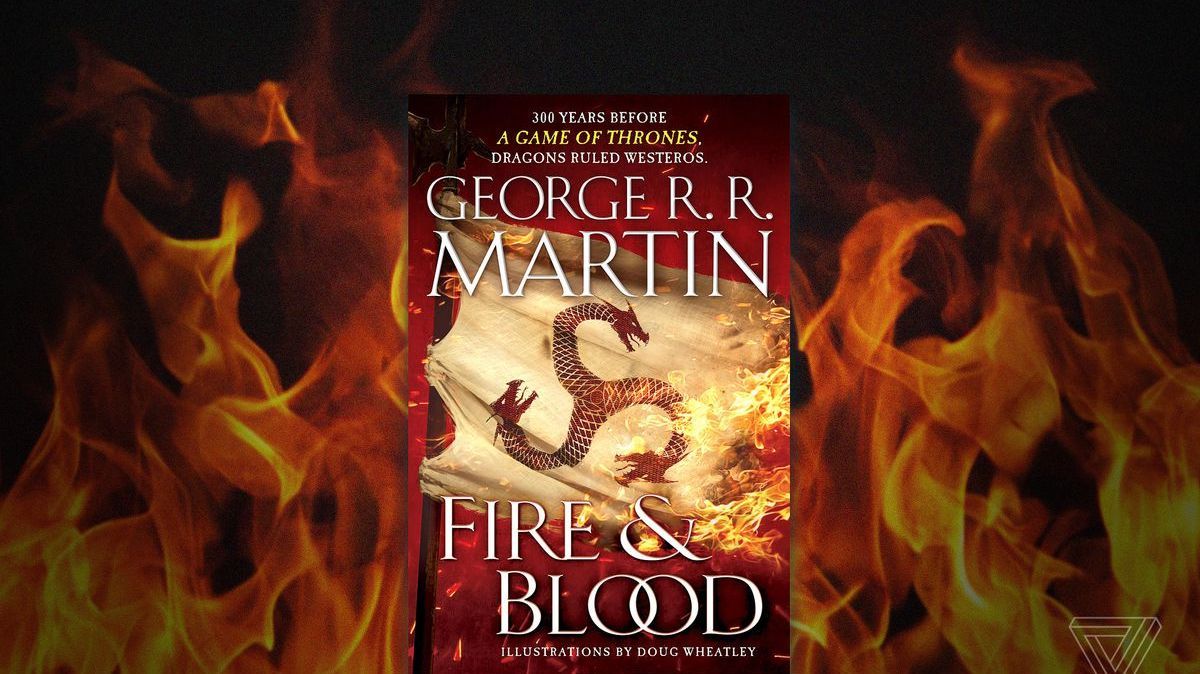 Fire & Blood: 300 Years Before A Game of Thrones (A Targaryen History) by George R.R. Martin dropped last month and I do mean dropped because the physical book is literally heavy enough to be a doorstop.

Fire & Blood It details the history of the fictional kingdom of Westeros through the reigns of the Targaryen kings, from Aegon the Conqueror to the regency of Aegon III, after the disaster of the Dance of the Dragons. It’s not told in a traditional narrative style but rather in the style of a faux history book. Some of the book’s contents have been published elsewhere, such as The Princess and the Queen and The Rogue Prince, but much of the material is new, particularly during the long reign of Jaehaerys I and Good Queen Alysanne, and, at the end, with Aegon III’s regency.

This is likely only a book for A Song Of Ice and Fire geeks, of which I’m one, and so I devoured it. Twice, just to absorb all the information presented and what it meant, not just for history that might impact the final, long-awaited books in A Song of Ice and Fire, but also for context on the type of realm inherited by the characters at the beginning of A Game of Thrones.

The book gives us glimpses (and sometimes more than that) of some fabulous female characters but, too often, it doesn’t give us enough, especially as the narrative has a tendency to dispatch its most interesting female characters via death in childbirth. (Alyssa Velaryon, you deserved better!)

But given that HBO seems to want more stories from the World of Ice and Fire after A Game of Thrones is finished, and given that there are numerous female characters that would make a great focus for a television series, especially because some of them are sadly neglected in the Fire & Blood narrative, I want to humbly offer my suggestions.

Some of these women have significant storylines in Fire & Blood, while others have shorter appearances, and there are some who are only mentioned here and there. The latter isn’t a drawback to me. Rather, it means that television writers could essentially create whatever events need for the show without stepping on canon events.

These five women could be leads of their own shows. (Always granted that more own voices writers are hired than are on A Game of Thrones because that show has some issues, especially writing white women, people of color, and especially women of color.)

First a note: I deliberately left out Good Queen Alysanne because her story will eventually become her husband’s story in many ways, and her story would also be a more straightforward story of a royal court. I was looking for a different angle for a story set in Westeros. This is not to say Alysanne’s story would not be awesome. It would be.

I also picked women who have differing backgrounds that will take us all over Westeros.

I’ll be somewhat vague so as to avoid major spoilers, as the book has only been out a short time but some minor spoilers are unavoidable.

1.Rhaena Targaryen, Daughter of Aenys, Wife/Widow to Aegon the Uncrowned, Forced Bride/Widow of Maeger the Cruel.

All the details listed above aren’t spoilers, as the Black Brides of Maeger the Cruel have been detailed elsewhere in The Sons of the Dragon short story.

Rhaena basically steals the show for much of Fire & Blood‘s first section, from the succession battles with Maegor the Cruel to the beginning of the reign of her brother, Jaehaerys I. This is a woman who was Aegon’s the Conquerer’s adored first grandchild, was widowed as a teenager, raped by her husband’s killer, and then, against all odds, managed to get the better of Maeger the Cruel by escaping him. And that’s only the first part of her story. She lives for years after that, attempting to forge a place for herself in a kingdom that’s basically passed her by, and she’s specially made an outsider by her preference for female company. (Read: lesbian.)

It’s a large chunk of Westerosi history and she’s at the center of it.

Protector of Good Queen Alysanne, the Scarlet Shadow is first mentioned as a fierce tournament knight who is eventually unmasked as a woman during a tournament in the early days of Jaerhaerys I. Later, after an attack on the young Queen in the baths, she’s appointed the sworn shield of Queen Alysanne to protect her lady in places that male knight can’t go.

Her viewpoint on the reign that lasted over fifty years is sorely missing from Fire & Blood. And, yet, her outsider’s perspective would be an invaluable way to look at this reign. That she accompanied the Queen at all times seems certain but the narrative is frustratingly incomplete on her relationships with Queen Alysanne and basically everyone else.

Her current story also lacks any personal details, and we know little of her childhood or her family. We also know little of how she did her job, other than her dueling with a wilding woman when Queen Alysanne visited White Harbor. Clearly, there is a much bigger story.

The good side of this is that the lack of details means there is plenty of room for television characterization.

LIke Rhaena, she also has a horrific story as one of Maeger the Cruel’s Black Brides. Her husband was also killed by him, and she was forcibly separated from her young children. But she’s no victim. She survives Maegor, as detailed in Sons of the Dragon. There is even the possibility that she killed him.

And then, well, SPOILER, but she receives an entirely new and fascinating role from Jaerhaerys I.

Yet another of GRRM’s intrepid Blackwood ladies, to go along with the much later Betha Blackwood, who married Aegon V (the Egg of the Dunk and Egg short stories set in Westeros.) Black Aly is first introduced as a war leader, an ally to then her 13-year-old nephew, later known as Bloody Ben, during the Dance of the Dragons.

And then she becomes connected to the Starks, taking the story to the North at a point in time that’s never been explored among the Starks to any degree. Let’s see what a Blackwood, a worshipper of the old gods, will do in Winterfell.

Yet another woman who’s only mentioned here and there but these are intriguing mentions! She’s the mother of the bastard boys Addam, who becomes a dragon rider, and Alyn Oakenfist, who later becomes the head of House Velaryon. Her sons may be the sons of Laenor Valaryon or they may be the sons of his father, the formidable Lord Corlys Velaryon, the Sea Snake. (Laenor was gay and so the sudden appearance of two of his bastard sons raised eyebrows, apparently. But the Sea Snake was the strongest proponent of the boys and so….)

But what’s most intriguing about Marilda of Hull is that she’s a mistress of ships in her own right, the daughter of a shipwright who took over her father’s business, apparently, and then accompanied her son, Alyn, on many voyages. She lives on to have many adventures, or so I hope.

And yet we never get her point of view.

Gah. She must have been formidable, to stand up for her sons and not care about being known as the mother of two illegitimate sons. She must have had a good relationship with her sons, who seemed to be close to her, from the few glimpses we get. And she must have been held in some esteem because, at some point, someone says she should have done the negotiating for a deal important to Westerosi history, instead of her son Alyn.

And did I mention that we never get her point of view?

Click through to read all of “5 Female Characters from GRRM’s ‘Fire & Blood’ That Need Their Own Series” at GeekMom.If you value content from GeekMom, please support us via Patreon or use this link to shop at Amazon. Thanks!

GeekMom: Dear Parents, I Promise It’s Okay If You Didn’t Go All Out for the Holidays 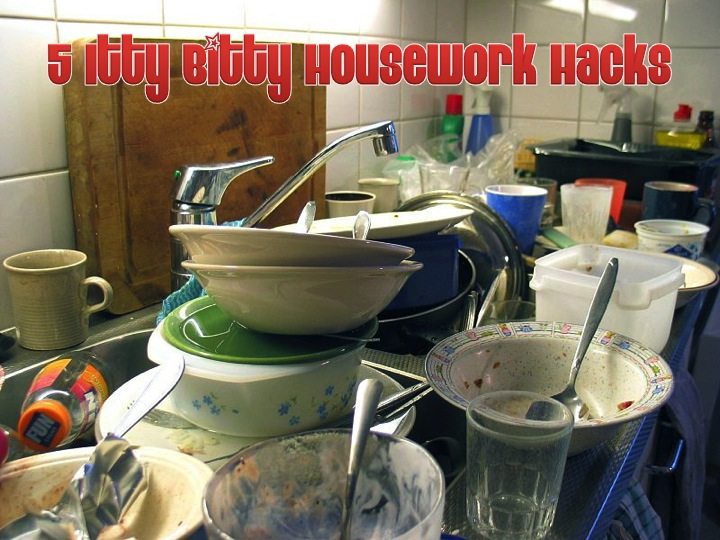 5 Itty Bitty Housework Hacks to Save Time and Money