Ray: Chris Mooneyham returns to Nightwing in Nightwing #52, but it’s a very different Nightwing than the one he left. This issue isn’t quite as aggressively bad as the first issue of Scott Lobdell’s “Ric Grayson” run, but it’s still a complete mess of a concept.

When the issue opens, “Ric” is reeling from the way he nearly killed a mugger when his martial arts sense memory kicked in. He broods on the rooftop, talks about his past, and then falls off a rooftop. Mooneyham’s gritty art style was never quite suited to the original Ben Percy run, but somehow it actually works better here – Ric Grayson is a shabby, scruffy man who fits his rough art style. There’s a lot of subplots going on in this issue, and some of them are more ridiculous than others. Scarecrow’s latest attack on Bludhaven seems to take a different direction – corpses filled with fear gas that they spray everywhere and possess everyone in sight. It’s certainly creepy, but it also seems randomly supernatural and not a particularly good fit for Scarecrow.

The writers seem to be having a bit of fun with Nightwing’s mess of a status quo. He’s currently crashing in a cat lady’s apartment, sleeping surrounded by dozens of cats. If this character was anyone we wanted to follow, it might be fun. Unfortunately, the character mainly comes off as sullen and distant, vaguely stumbling from mystery to mystery. An acquaintance of his gets kidnapped, and he’s on the case, but we know nothing about his connection to this person. And then there’s the other ongoing main plot, as Detective Sapienza puts his plan to replace Nightwing into effect. He assembles a team of his fellow Detectives to put on old Nightwing costumes and take back Bludhaven. It’s an amusing concept, but there’s a lot of ideas here that get thrown at us with only a few pages of setup.

The whole status quo is ridiculous, of course, because it’s just a terrible and insulting depiction of brain injury, but there’s elements here that could work if there was decent execution.

Corrina: I’m not reviewing individual issues, both because of the writer’s history of sexual harassment and because this plotline is an insult to anyone dealing with a serious brain injury. Oh, and it’s an unbelievably stupid choice of direction for Dick Grayson too. 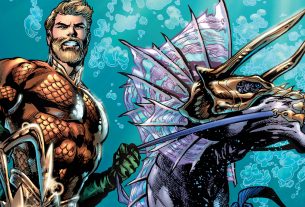