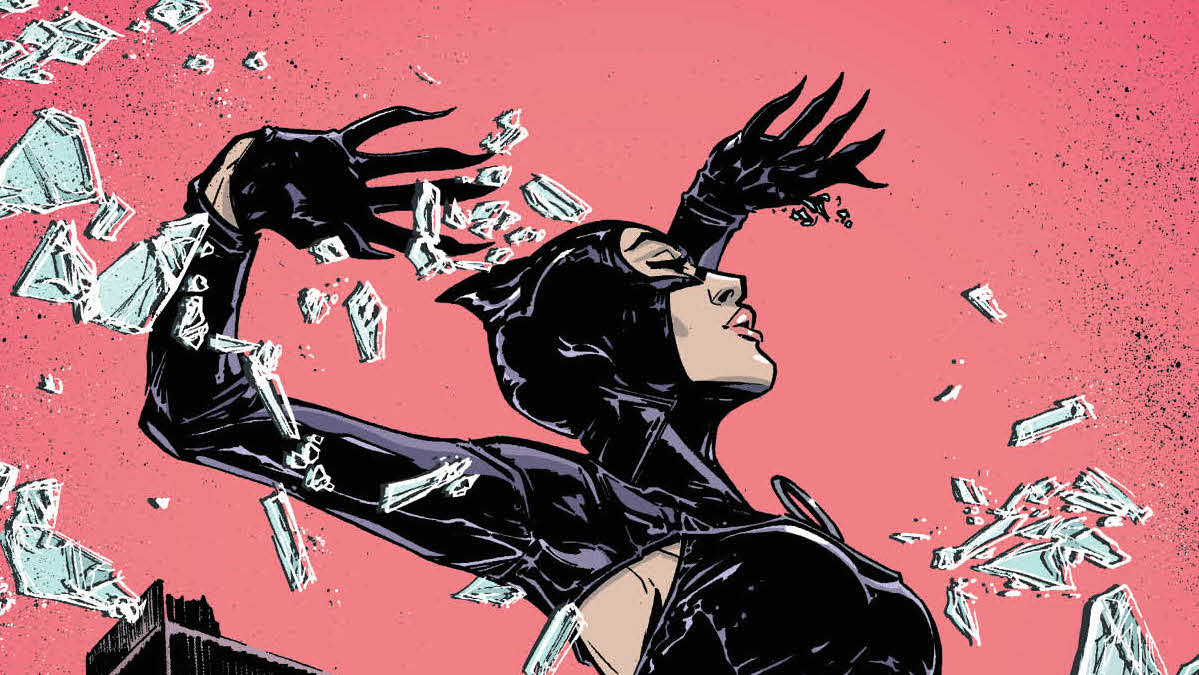 Corrina: Love the Juxtaposition of the Stories

Ray: Joelle Jones is back on full art duties for Catwoman #5, but the story isn’t quite up to the level of the last issue. That’s mainly because this story is more of a snapshot, taking place between the minutes of two brutal confrontations. Most pages mix the panels in a fashion that’s thankfully not confusing, as Catwoman and the sadistic Raina Creel each find themselves in life-or-death situations. At the Governor’s mansion, Raina pins her sick husband to the bed and injects him with a mysterious drug. Instead of killing him directly, it’s a psychotic drug that boosts his strength and also makes him incredibly paranoid, eventually turning on himself and cutting himself to death. Sure enough, Raina is ready to play the shocked, grieving wide as soon as the security gets inside, and the next step towards taking over her husband’s empire is complete. As soon as the funeral is over, she’s back giving orders to her son.

Selina’s goals this issue are much more noble, not surprisingly. The last issue, she found her catatonic sister Maggie in a shady mental institution and has been trying to get through to her. But when she arrives, she finds the corrupt doctor giving her a mysterious injection that he promises will “Take away her pain.” Naturally suspicious, Selina attacks and winds up fighting off the entire mental institution. She’s eventually captured – but not before she sees her sister suddenly wake up and recognize her. So that’s a huge dangling plot thread, but first Selina’s going to have to survive. After a brief dream of Bruce, she finds herself in the basement of the Governor’s mansion, at the mercy of the Governor’s shady son – only to quickly turn the tables and get ready to face off against the woman herself. It’s a tense issue, but one that doesn’t really advance the plot as much as I’d like. Jones writes and draws the hell out of a fight scene, though.

Corrina: I love that this series evokes the best previous Catwoman series, the one started by Ed Brubaker and Darwyn Cooke. Jones’ art style would have been a perfect fit in that noir-style series, and her parallel storytelling would have worked nicely too, especially as Brubaker tended to focus on more grotesque villains, like Black Mask, seen in flashback earlier this series.

But the plotting has been frustrating to me in the first few issues, as the multiple Catwomen and the attempt to frame Selina when she was uninvolved in anything shady lacked explanation and setup. But this issue pleased me because it tied that all together. Selina’s sister, Maggie, is involved in the main plot, as someone who’s also possibly been given this drug that provides super-powers but also seems to drive people off the deep end.

The pages that intercut the scenes of Selina fighting in the mental institution and Raina injecting her husband are a terrific parallel and a great showcase for Jones’ art. It’s one of the best action sequences I’ve read this year. Though I still wonder why Raina’s men would keep Selina alive, and why Raina needs control so badly, I’m finally hooked on this story.

I especially liked Selina’s flashbacks to her relationship with Bruce. I still hate the whole “I’m leaving so you can be Batman” end of the wedding and feel Selina’s decision was stupidity induced by the creative team, but I’m for anything that provides insight into the Selina/Bruce relationship.