I have been a constant reader of Hard Case Crime novels for close to a decade and for a long period of time was a monthly subscriber. The series brings back the look and style of the classic pulp crime novels going as far back as the 1920s. New stories, as well as republished classics, are part of the Hard Case lexicon. Some of the classic writers include Lawrence Block, Harlan Ellison, Robert Bloch, the legendary James M. Cain, and the editor Charles Ardai himself. Most of the settings are in a hard-boiled world of post-war America where organized crime waged war in the streets and desperate men and women tried to claw their way out of the gutter and into legitimacy. This is where we find the character of Minky Woodcock, a young female detective attempting to solve crime in the 1920s.

GeekDad was lucky to be able to sit down with Ardai, VonBuhler, and Daley to discuss the new graphic novel, Minky Woodcock: The Girl Who Handcuffed Houdini.

My Thoughts on the Graphic Novel

Minky Woodcock: The Girl Who Handcuffed Houdini is another great addition to the Hard Case Crime Catalog. It will give you a wonderful trip back to an age of myths and wonders. It is not for the whole family; it is for the teens and above in your geek family. The wonderful artwork and writing of Cynthia Von Buhler show the passion she has for the Minky Woodcock character and the period she writes in. If you are a fan of the Noir period, the look, the art and the hard-boiled tales, you should definitely pick up a copy of Minky Woodcock: The Girl Who Handcuffed Houdini as well as all the other Hard Case Crime novels and graphic novels.

You can purchase Minky Woodcock: The Girl Who Handcuffed Houdini for $16.50 for the Hardcover. 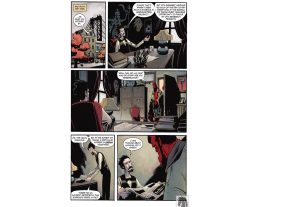