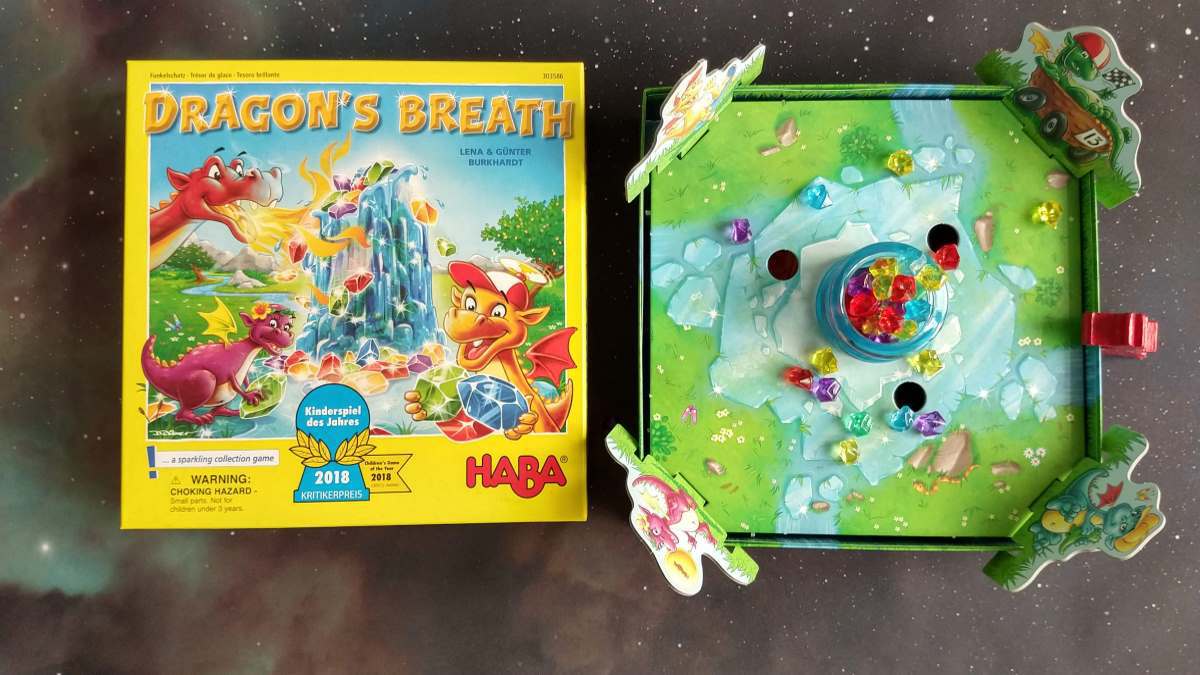 Dragon’s Breath (or Funkelschatz as it’s known in Germany) won the Kinderspiel des Jahres (Children’s Game of the Year) at this year’s Spiel des Jahres. It’s a family game aimed at children aged 5 and up. The aim of the game is to collect more colored gems than your opponent. Dragon’s Breath requires a steady(ish) hand and a large slice of luck. As the ice tower melts, the gems will fall, but where will they land?

What is Dragon’s Breath?

Published by German games manufacturer Haba (they of Rhino Hero fame), Dragon’s Breath is a game for 2-4 players. At the time of writing the game is retailing at $20. Dragon’s Breath involves some forward planning and a large amount of luck.

Like many Haba games, the rules open with a fairy tale type story to explain what we’re doing.

Whilst on an expedition, four dragon children find an unusual sparkling treasure: a column of ice with sparkling stones frozen inside. They want to take the treasure back to their cave but, unfortunately, the column of ice is too heavy. The only thing they can do is melt it, but their fiery breath is not hot enough to do so. They ask their dad to help, and he melts the column a bit at a time. As the gems begin to fall, who will collect the most?

How does that translate into a game?

At the start of the game, all the gems are placed in a column of rings in the center of the board. Each turn a player will remove a ring causing gems to cascade to the floor (board). Each player will have chosen a specific color to collect. If a gem of their color falls and doesn’t go down one of the board’s holes, they get to put it in their cave. The person with the most gems at the end of the game wins.

The components are all well made. The gems are pleasingly sparkly, making the game very attractive for little hands, and the dragon dad is suitably dad-like in his quiet indulgence of his young scamps!

How do you play Dragon’s Breath?

As you might expect for a game aimed for ages 5+, it’s simple to play.

The game board is placed on top of the base, hiding the sections underneath. The corners of the box are arranged to point towards each of the players. There are three central holes in the board. As the ice melts, any gems that fall down these holes will be lost. There is also a hole in the corner of each box. These form a cave entrance for each player. Any gems collected are popped in your cave until the end of the game. Gems disappear from view and are not revealed until the end of the game when players count up to see who wins.

The game board also has a slot in each corner. These are to slide each of the dragon children into when playing. Each child can pick their dragon. There are four different poses, two boys and two girls. The boys have go-karts and skateboards. The girls… err… do not, which I think is an unfortunate and unnecessary difference.

The bravest player is given the dragon dad marker.

What happens during a round of Dragon’s Breath?

For three or four players, the player to the left of the dragon dad marker gets to choose one of the five sparkling stone cards. This will denote which color gems they are collecting this round. The other players follow suit. Any unpicked sparkling stones are set to one side. (In a two-player game each player will pick two colors).

The player who is dragon dad lifts off the top ring of the ice tower; this will probably send gems cascading to the game board. This can be done carefully to avoid many gems falling or quickly in the hope of causing a deluge. The ring is removed from the game.

Phase 3: Dividing up the gems.

Starting with the player with the dragon dad marker, players collect any gems that match their sparkling stone card. They put them in the cave behind their player marker. After that, play moves in a clockwise direction with each player taking their gems. Any unclaimed gems are swept down the holes.

Finally, the dragon dad marker is passed to the next player, the sparkling stone cards are collected back in, and play returns to Phase 1 as outlined above.

Play continues until all the rings have been removed, with gems collected each round being stored in player caves. After the final ring has been removed, any gems that remain on the ice floe card (which was placed at the center of the board right at the beginning) are left there and will not be scored.

Nice and easy. Gems from each player’s cave are counted up. Whoever has the most wins the game!

Dragon’s Breath is a very appealing game for younger children. It has some strategic depth (“Which color stone should I try to collect this round?”), but it does rely mostly on luck, keeping things on a level playing field, which is important for family games. Being older does not necessarily mean being better when playing Dragon’s Breath.

The components are appealing, especially the cascading gemstones. All my children wanted to get involved with this one. The flip-side to there being a large slice of luck is that after two or three games my older children were less interested in carrying on, but, that said, there is something compelling about trying to collect more gems than you did the previous game.

The game is simple to understand and easy to set up for smaller hands. It’s immediately accessible and engaging for younger players. On the surface, there’s no great tactics or thought required for adults, but it’s fun to play a few games. There’s something about those falling gems that keeps the game from becoming a chore.

After playing a few extra games, a subtle ebb and flow begins to emerge that gives Dragon’s Breath a hidden depth. Clearly, there is something to be said for picking the color most likely to cascade, but if you’re not first up, perhaps you can’t. The way the game works, with the person who picks the last sparkling stone card, being the person who is going to remove the next ice ring, you need to give some thought to which stones you leave them to pick. The game is simple, but it does have some choices to be made, and those choices can alter the way people play.

Dragon’s Breath is at its weakest as a two-player game. You’re effectively trying to catch half the gems each time, and somehow the contest loses something. Which sparkling stone card you pick feels almost entirely arbitrary.

Is it a worthy winner of the Kinderspieler?

I’m not quite sure what I was expecting from the winner of the Kinderspieler. Something amazing? Last year’s winner of the Spiel des Jahres (not the Kinderspieler), KingDomino, is an amazing game and nominee Magic Maze is pretty great too. For me, Dragon’s Breath does not reach these heady heights. It’s a nicely put together game, but even with the staggered sparkling stone choice, doesn’t have much depth to it. Adding this depth is obviously tough to do in a game for 5+, so perhaps I’m asking too much.

Certainly, Dragon’s Breath is a great easy family game. Despite its simplicity, it is good fun and will cause players to whoop and cheer. It’s hard to beat the feeling of suddenly finding you can take three gems when you were perhaps expecting one, or when half your opponent’s gems slip down the holes and out of play.

Dragon’s Breath is quick to set up and to take back down again. It won’t bore the adults or lead to restless kids. It looks great, is thematically intriguing, and will easily deliver 15-45 mins (1-3 games) of gently competitive fun. Whether I think it’s worthy of the Kinderspieler is somewhat irrelevant. It did win and people everywhere will have fun playing Dragon’s Breath. 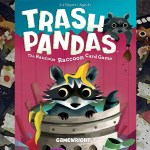 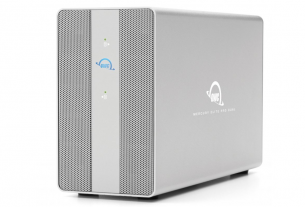