Ray: This issue is sort of a breather before the final two issues, as John Constantine is only in a few scenes and the big bad, Diana Prince, is almost entirely absent. That doesn’t mean the issue is free of tension, as Michael Cray may be going up against an even tougher foe – the one taking up permanent residence in his mind. Michael’s battle against the alien intelligence masquerading as a brain tumor has been at the background of this issue since the beginning, and it’s been complicating his life even as he takes out one twisted Justice League member after another. The mysterious Dion Fortune, in league with Constantine but not on board with his twisted plans, knows more about it than she’s letting on and contacts Michael to help him – but he’s in no mood to talk, after a brutal early segment where Michael’s ally Homa shows up, seemingly possessed and trying to kill him. After she fails, she runs for the window and falls to her death, Michael watching helplessly as she dies as part of a twisted ritual by Constantine.

Following this tragedy, Michael cuts off contact with his handlers in the United States and tentatively engages Dion, making clear he intends to kill her if she crosses him. Some of the dialogue in this issue is a little too close to action-movie tropes for my tastes, but the ongoing mystery that Hill has been weaving through the title is more than enough to carry it. The final few pages have almost no dialogue, as Diana Prince comes under attack by assassins and brutally fights them off, and Michael begins communing with the voice inside his head. The final scene of the issue finally reveals this creature in full, and it lives up to the hype. When you wait this long to reveal a monster, there’d better be a payoff. There is a lot to resolve in the final two issues – Michael’s conflict with his employer, his final showdown with Constantine and Prince, and the battle of wills with the monster in his head. Given the 90’s mishmash of sci-fi tropes this comic is built out of, the fact that it’s this compelling is a testament to Hill’s skill as a writer. 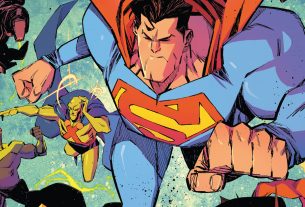