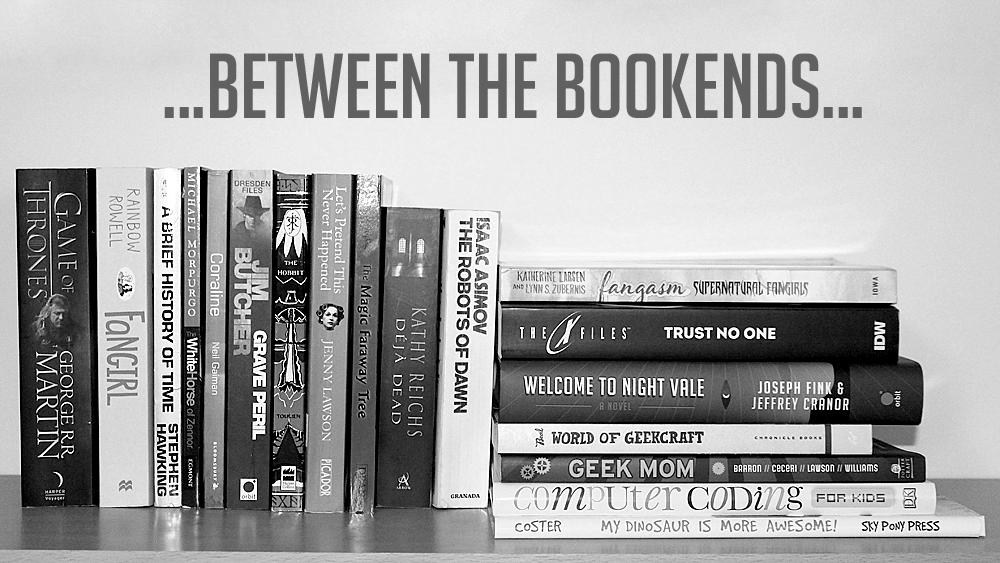 In this month’s Between the Bookends, Nivi, Rebecca, K, and Sophie share their favorite books from July, including picture books, middle-grade novels, and Minecraft experiments to share with your kids, steamy romance (you probably shouldn’t share that one with your kids), and several novels dealing with diverse subjects including autism and LGBTQ issues. We hope you find something worth adding to your to-read pile.

The Ensemble by Aja Gabel

Nivi enjoyed this well-written book, although she felt she was missing out by not playing the music as she read. It’s about a quartet and their lives over the years. It delves into their lives, their relationships, and the deep connections they form with one another. The writing is beautiful, but seriously, each section starts by listing four pieces of music (that the quartet plays during some performance during that section), and it wasn’t until the very end of the book, as Nivi sat alone in her kitchen, that she finally just asked Alexa to play the piece referenced, and read with that music in the background. She imagines (or not-so-secretly hopes) that the audiobook version would come with the soundtrack playing in the background.

The Ensemble is a nice story, with interesting characters, and certainly makes Nivi appreciate the complexities of ensemble performances.

Rebecca Angel really enjoyed Wallbanger by Alice Clayton, which she reviewed previously, so in looking for another escapist romance, she turned to the same author. Nuts is part of The Hudson Valley Series. Considering Rebecca lives in the Hudson Valley of NY, she thought that would be amusing. Starting to read the book, however, it got to be a little too close to home. The main character is a city girl moving to a small town where she falls for a local farmer. Now, this is a very common plot (two different worlds collide and…romance!) but it also happens to be the true romance between Rebecca and her husband. (The main character in Nuts originally was from a small town and Rebecca was always a city girl, but that’s quibbling details.) Ok, so that’s so common, whatever, right? Wrong. Not only is it the same romance set up in Rebecca’s life, but it takes place where she lives and…the farmer’s last name is Maxwell. That just HAPPENS to be Rebecca’s husband’s last name. Maxwell Farms exists! In this area! And the farmer DID fall for a city girl!

It took a couple chapters for Rebecca to get over her, THIS IS ME!!! reaction and get into the story which is plenty different from her own romance. Happily, she found another escape in Clayton’s work. It had laugh out loud lines, especially with silly references to Little House on the Prairie TV show. Plenty of steamy action too. A perfect summer read.

Game Changers: The Story of Venus and Serena Williams By Lesa Cline-Ransome and James E. Ransome

Anyone who says, “If you work hard enough, you can achieve anything!” is privileged or delusional. There are plenty of people who work hard all their lives and never come close to success. For women and people of color, it takes hard work just to get to the starting line. Game Changers is a picture book about two women of color who not only started but won. The question is, how?

The illustrations are beautiful paintings and collages showing the tennis sisters’ story from childhood when their father taught them tennis in a neighborhood where gunshots would ring out. To teenagers rehearsing how to deal with the prejudice they were sure to face on the professional courts. And finally, to the amazing women champions they became, cheering each other on. For parents and children, this is an inspiring story about two talented and hard-working girls who relied on their family to achieve greatness. That is something to tell your children. This book tells the truth.

The Someday Birds is a middle-grade novel about Charlie, a kid on a cross-country road trip with his older sister, younger twin brothers, and a strange young woman who their grandmother has put in charge of them. The family is traveling to see Charlie’s father who is recovering from a traumatic brain injury he received while covering soldiers in combat zones within the Middle East. Charlie and his father both love birds; in fact, he and his father once made a list of all the birds that they want to see someday. On the road trip, Charlie decides that if he can complete the list before the trip is over, his father will get better.

While this book deep dives into the different ways that families can relate and integrate, what Kay particularly loved about this book was its portrayal of an autistic character. The author, Sally J. Pla, is autistic, making this an #ownvoices novel. Charlie’s neurology is portrayed sensitively and authentically. There are moments where other characters are frustrated with his behavior, but they are rarely frustrated with Charlie himself. Charlie himself seems at peace with his neurology and the effects it has on both him and those around him.

There are only a handful of middle-grade or young adult books with autistic characters that Kay is comfortable recommending to kids; too often they focus on all the ways the character is “wrong” or “broken.” She happily recommends this book to anyone wanting to read a book from the first person point of view of an autistic child, particularly those eight to twelve years old.

Alice has the world nicely organized into scales of cuteness – from different people she knows to things like kittens and puppies – until she meets Takumi. Takumi destroys the cuteness scale – and in many important ways, upends Alice’s world.

Alice is asexual, and has been out to herself for a while now; she has not, however, come out to anyone outside of her very closest friends. Her identity has ended at least one relationship, as her partners fail to understand how very much Alice can love regardless of her desire to have sex.

Kay greatly enjoyed Let’s Talk About Love. Not being ace or black, she doesn’t have the experience necessary to say whether or not the representation was good. She liked, however, that it didn’t spoon feed her information about asexual identities. The terminology was there and understandable in context, but this wasn’t Asexuality 101. She also enjoyed that Alice was comfortable with her queerness; the relationship that’s self-destructing on the first pages of the book is with a girl.

The secondary plotlines – Alice’s major, her familial relationships, Takumi’s relationship with his family and nieces – are somewhat underdeveloped, but the primary stories of Alice and Takumi’s growing relationship and how it affects Alice’s connections with her best friends – are beyond charming. This was an enjoyable ace romance that should be readable for anyone from teens to adults.

The Secret Seven: Mystery of The Skull by Pamela Butchart and Enid Blyton

Sophie and her son read The Secret Seven: Mystery of the Skull out loud together. This is the first official addition to Enid Blyton’s Secret Seven series since her death in 1968 and is written by Pamela Butchart, author of Baby Aliens Got My Teacher!

For those unfamiliar with the classic British series, the Secret Seven are a secret society of seven children, Peter, Janet, Jack, Barbara, George, Pam, and Colin, who go about solving mysteries and foiling criminals. Fifteen Secret Seven novels were originally published between 1949 and 1963 and they all follow the classic narrative where the children are smarter than most of the adults and are able to gather enough evidence to put a stop to whatever is going on. Often there is a hint of paranormal elements to the mysteries, but as in Scooby Doo, these always turn out to have a down-to-earth explanation.

In this new book, the seven kids investigate strange goings on surrounding the new owners of a local hotel. Why are they digging up the grounds, why is the restaurant only serving burnt fish pie, and what is causing the scratching noises coming from the top floor? As an adult, the big reveal was blindingly obvious, but Sophie’s eight-year-old was hooked.

Mystery of the Skull does nothing new or shocking to the Secret Seven universe. The characters and settings have remained the same although some of the language has clearly been brought up-to-date. The story also avoids anything which sets it in a specific time period, with no modern technology present (none of the Seven use smartphones or computers) but also nothing to place the book notably in the past.

Mystery of the Skull won’t convert anyone who doesn’t like the original series, but Secret Seven fans will love having a new adventure for their favorite detectives.

Sophie’s eight-year-old son also enjoyed working his way through Unofficial Minecraft STEM Lab for Kids by John Miller and Chris Fornell Scott. This activity book combines experiments to try out in real life and also in the game, allowing kids to compare real-world vs in-game physics and there is also an introduction for teachers and parents that discusses how Minecraft can be used to teach STEM and explains some basics of the game.

There are six quest areas inside the book that link similar scientific study areas together. These areas are: “Pistons, Rails, and Redstone”, “Construction Zone”, “The Sky Is Not Your Limit”, “Rocks, Minerals, and Gems”, “Cycles in Science”, and “Engineering Challenge” and each of the quest areas includes four labs. These labs cover a wide variety of scientific study including measuring gravity, creating a pocket solar system or egg farm, dipping into quantum physics, and building ziplines, batteries, and space stations,

The real-world experiments are slightly more low-key than building your very own space station but include things like building a pinhole telescope or a marble roller coaster, creating slime or a model of a Martian habitat, baking a soil layer cake, and growing crystals. Each of the real-world experiments and crafts is paired with a Minecraft activity on the same subject, and the book also includes extra information such as links to relevant websites or YouTube videos along with interesting historical or scientific facts.

Sophie’s son really liked the way the book allowed him to create and do things both in the game and in real life. He thought the instructions were easy to follow and required almost no help in building his in-game experiments, although parents will need to help with most of the real-life activities. This is a great book for encouraging Minecraft-obsessed kids to try something different in the game and getting them involved in STEM in the real-world too.

Click through to read all of “Between the Bookends: 7 Books We Read in July 2018” at GeekMom.If you value content from GeekMom, please support us via Patreon or use this link to shop at Amazon. Thanks!

Let It Rip!: How Beyblades Are Teaching My Sons Science 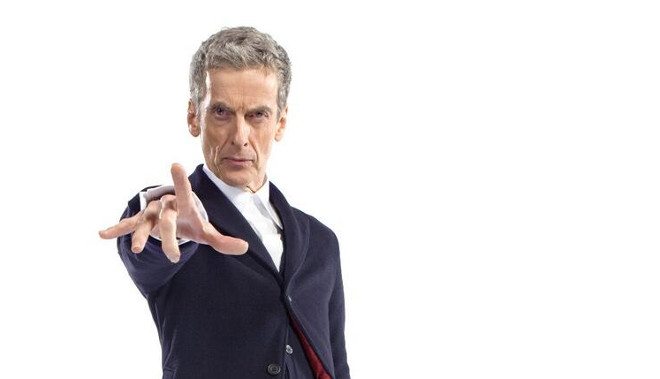