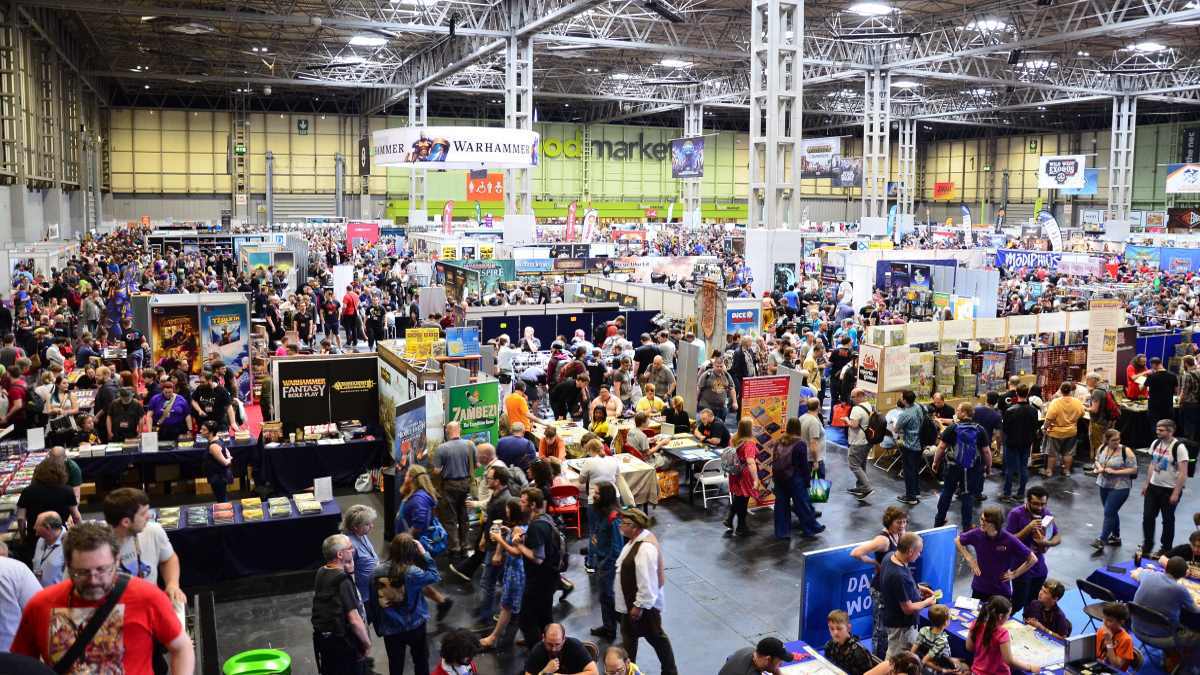 As I mentioned in my preview post, this year I visited the UK Games Expo for the very first time.

In what turned out to be an uncanny move, I attended on the last day, which according to just about everybody I spoke to, was an awful lot quieter than the previous two days. I can’t make a direct comparison, but if you’re an EXPO novice, and don’t mind the game you wanted to buy being sold out – I’m looking at you Azul, then I’d consider leaving things until the last day. I could access everything I wanted, and the staff on the booths seemed remarkably chill!

Here, then, are seven great things I saw and loved at the UK Games Expo.

Cubicle 7 make RPG books that scream “buy me” they have a Doctor Who system, their own One Ring RPG, set in Tolkien’s world, and the D&D 5th edition ruleset, Adventures in Middle Earth. They also make the Lone Wolf RPG, something I know little about, but hope to find out more, in the near future. The reason why they were top of my list to visit, however, is that they’re bringing back Warhammer Fantasy Roleplay (WFRP). This is looking for a Gen Con release, and preorders are available now!

The new system will keep the core D100 base of the original, with a similar skills and careers track, but the mechanics will be brought up to date for a more streamlined gaming experience. As one of the people on the Cubicle 7 stand put it, “with the original percentile system you start out by missing [in combat] an awful lot.”

Also on the horizon, is the Age of Sigmar roleplaying game, set in Games Workshop’s new Warhammer realms. This is going to have the same high fantasy, heroic scale as its tabletop counterpart, and a completely new system from WFRP. The two games will have different and separate mechanics.

Based loosely on PlayFusion’s Lightseeker’s CCG, is the forthcoming Age of Sigmar: Champions CCG. This is a new, card only, collaboration (i.e. no minis) between PlayFusion and Games Workshop. Whilst I have reservations about adding even more addiction possibilities into our house, I’m intrigued by this game, particularly how it compares with Warhammer Underworlds: Shadespire. It’s a fun game. With four tracks to manage, and four heroes to send on quests, the game’s mechanics are simple to understand. The main drive is to reduce your opponent to zero hit points.

Despite a simple central mechanic, much like Shadespire, depth is added through card interactions, and building decks with cards that work well together, or that feed off your opponent’s cards too. There are quite a lot of in-game “buffs” that have to be kept track off. This was a little bewildering on the first play, but all in all, Age of Sigmar: Champions looks to be a sleek addition to the canon.

I don’t have any information on price points yet, but I hope that good games can be had with just the purchase of starter warbands, with boosters only required to increase variation or for competitive play. This too is slated for a GenCon launch. (Note: A limited edition founder’s pack went live as I was writing this post, so it is possible to get in on the action early. Beware though, impressive as the founder’s packs are, they’re limited to 1,000 and will cost £200 ($265).)

Burrows and Badgers! My favorite game I’ve never played! I love the look and feel of this game, and seeing the miniatures in the flesh (or the pewter), was a pleasure. The only problem with turning up on the final day was that stocks were depleted, so I couldn’t choose from the entire range. As this is a sign of the game’s popularity, I definitely shouldn’t grumble. I picked myself up a Fox and Mole Shaman, and an Expo special Mouse Hunter, with a free scenario thrown in too!

I read a review of this game just prior to going to the UKGE. If you’ve never heard of it, you play clouds trying to refresh the land. By making crops grow you’ll score victory points. This is a beautiful game, with a quirky theme that I just fell in love with. Quality components, including clouds you can fill with colored droplets AND attach lightning bolts to. What’s not to love? It looks to be a worker placement/set collection game that manages to remind me of Agricola and Herbaceous simultaneously. 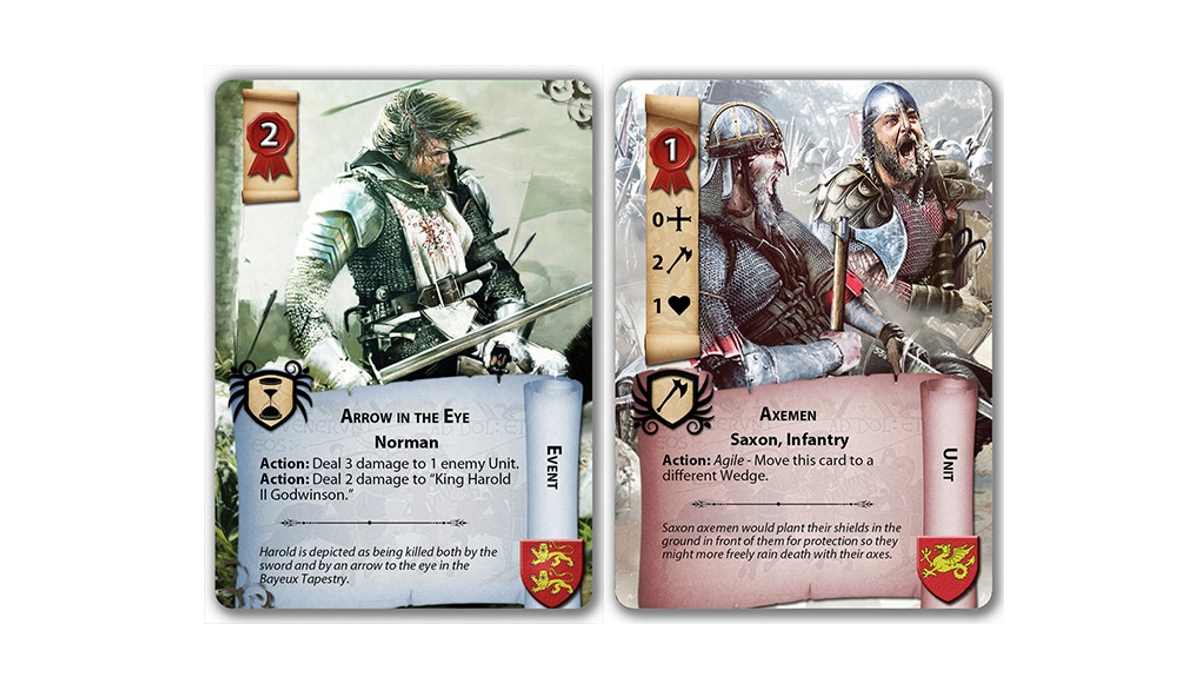 By chance, I stumbled on the Hall or Nothing stand, being attracted by the stunning artwork on display. I love the concept of 1066. It’s a deckbuilder that draws (ahem) on the Battle of Hastings. The game’s creator, Tristan Hall has pored over The Doomsday book, drawing inspiration from the real-life people mentioned within. Hall has balanced the relative strengths of the 1066 cards based on the wealth and influence given in The Book. With each side (Normans and Saxons) needing to complete five historical objectives before finally attempting to win the Battle of Hastings, the game oozes historical authenticity.

Tristan is an engaging advocate of his game, and the process of bringing it to the table. The game looks amazing and I can’t wait to try it out. He has further hopes to bring the Seige of Malta to the table, and once again he has hit the books, drawing on contemporary sources to bring his game to life. 1066 looks to be something that can inspire young minds as to wonders of history, whilst delivering an excellent gaming experience. Look out for a review later in the year!

If anybody was more effusive and engaging about their creations than Tristan, it was Bez Shahriari. This larger than life character has brought an amazing amount of verve and fun into a deck of cards. Wibbell ++ (or Stuff by Bez), is a single deck that can be played in a variety of ways. Whilst all the game are word games, some have physical aspects, whilst others become more difficult the better you are at them, allowing balance when playing with younger players.

Creator Bez has a clear vision. She actively encourages invention around her deck and wants children everywhere to able to access the word games possible with it. Her goal is to make her game as accessible as possible for children’s groups everywhere. Bez’s Wibbell++ deck and her eloquent advocacy of her creation are powerful indeed. Look out for a review soon!

The UKGE bills itself as family friendly, but it’s only once you go that you realize how family-focused it is. The Family Zone was huge, and well-run, bursting with games to try. Even on the main floors, everywhere I turned there were families. Some staggering under the weight of the games they’d bought, others playing complex Euro games with baby-filled papooses clamped to their chests.

Some babies were even getting on the act of promoting games. A very cute 5-month-old helped seal the deal on a copy of Penguin Brawl. The lady who taught me how to play Petrichor was two months off delivering a little water droplet of her own. UKGE 2019 may well present fresh challenges for that family! I wish them all the best for their new delivery. It was great to see so many young, old, and mid-range gamers all enjoying their hobby under the same roof.

As I sat waiting for my train home, I realized there are many things I didn’t see fully in my day at the UKGE. More time would have been nice. Yet, I cannot complain. I was tired but not exhausted, had met some lovely people, brought home some new games and had a great time. At the close, a huge cheer went up in celebration of a highly successful event.

The UKGE 2018 was a blast, now I’d better start making sure the calendar stays clear for 2019 too.