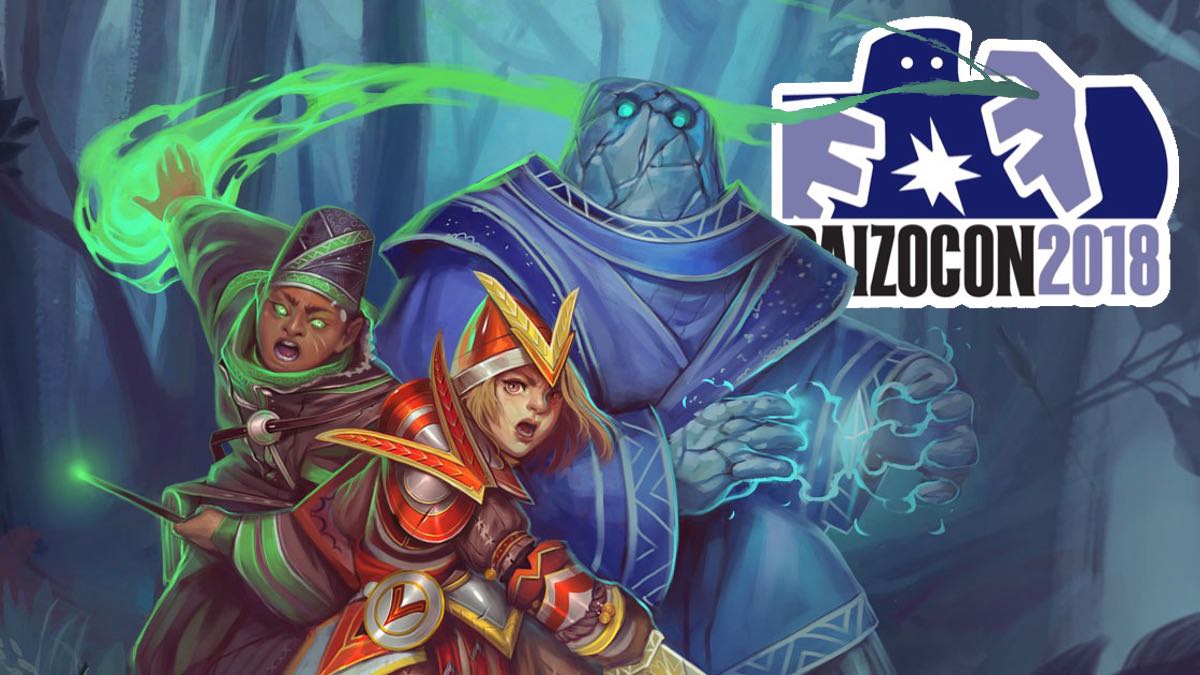 As it’s Saturday night, I just got back from the annual must-attend PaizoCon banquet– PaizoCon staff and special guests sit at each table so you get to nag them with all your geeky-gamer questions while eating good food, and getting upcoming news and spoilers.

I’ll delve into the rest of my con experience in a later post, but here is a brief rundown of the news from PaizoCon.

First up was the new kid on the block, Starfinder. It’s been going strong for the past year, selling out the first print-run of the Core Rulebook, and I think most all other content at GenCon last year, and going like gangbusters since.

The next release, in July, is The Armory: a 169-page hardcover of equipment for all your space-faring needs. Expect weapons, powered armor, drones, and more!  The Armory will be followed by Alien Archive 2 in October, a 160-page hardcover of more alien goodness. Assassin droids, six-legged space llama things, a cross between razors and a wolf, slug-dudes– more playable races. Fun to read even if you don’t play!

The Starfinder Adventure Paths have been coming out one every two months, but they’re switching to one per month starting in August with the next three-part Adventure Path, Against the Aeon Throne. This will take your Starfinder characters from 1st through 7th level.

After that, the next adventure path, while not directly related, is another three-parter, taking your characters from 7th level and beyond. Signal of Screams runs November through January. Rounding out the year we get a six-part Adventure Path, Dawn of Flame.

With a new edition coming out, I was curious what we’d be seeing concerning Pathfinder First Edition. While you could play existing first edition material for likely the rest of your life, you have to wonder how eager we consumers will be to buy material for the system on its last years of “support.”

But again, the content being released is awesome– a great capstone to a long-lived gaming system that I have put countless hours into, and likely will for years as I finish off my Carrion Crown and Rise of the Runelords campaigns. Given the announcements, I’ll likely be playing first edition Runelords for the next 20 years!

Releasing in July, we get the last ever Pathfinder First Edition hardcover, a 280-page volume, Planar Adventures. We’ll get such morsels as “where do the gods live,” new races and monsters and get this, a CR 30 Leviathan! There’s a capstone monster if I ever saw one!

The most exciting first edition news for me though was the next Adventure Path. Continuing where Rise of the Runelords, and its sequel, Shattered Star, left off, we get Return of the Runelords. Taking our characters from 1st through, yes, the 20th level, we’ll get to say goodbye to Pathfinder First Edition with some epic play in the story that started it all– Runelords!

We were told that there’d be time travel to the earlier APs, and I heard something in another session about your prior characters being involved? Color me intrigued!

Going hand-in-hand with more Runelords activity, we get a 96-page softcover detailing Sandpoint in October. With me still being early in my GMing ofmRise of the Runelords this will be a must-purchase for me.

While Return of the Runelords would be an excellent final Adventure Path, it doesn’t stop there. There’s still a second Adventure Path for the year, The Tyrant’s Grasp. Creative Director James Jacobs did not say much about this, but given that image of Tar-Baphon, it’s sure to be another epic journey!

For Starfinder Society she said that they did not feel as if the first season’s story, Year of the Scoured Stars, was fully told, so, they’d be continuing the story in season 1a. The final season of Pathfinder Society will give us Year of the 10 referring to the in-game Pathfinder Society leaders, a group shrouded in mystery and known as the Decemvirate. The season will bring some stories to their conclusion while setting us up from Pathfinder Society 2.0. The Adventure Card Guild will follow a similar but different story path with Season of the Tapestry’s Tides, based, I believe she said, off the Skull and Shackles base ACG set.

More information will be forthcoming in relation to the Pathfinder Playtest and its interaction with Pathfinder Society.

Mike Selinker, designer of the enormously successful Adventure Card Game discussed the new edition of the game, and new design philosophies– a generic base game, purchasing one set that has everything rather than requiring additional purchases throughout the year to get continuing content, and more.

It was not clear what the changes were, and they are playtesting new edition mechanics here art PaizoCon 2018, but we’re told that the new game, based on Curse of the Crimson Throne, will release at PaizoCon 2019! Character decks will be on hiatus until the new release.

The most anticipated news from PaizoCon 2018 is, of course, the Pathfinder Playtest.

Jason Bulmahn took the stage to give us the scoop. He reiterated what we’ve been hearing from the first news of a new version– the whole focus is to reduce complexity while keeping all the great depth of the game, allowing us to tell the same fabulous stories as we always have been, all with a system easier to play and much easier for a new player to hop into.

He then demoed some aspects of the game going over the ABC’s of creating a Druid (a class we have as yet not seen any information on!) In building a character, you start with your ancestry ( the much more sensical version of race), then pick your background (what you were doing before this point in your adventuring career), and end with class– the ABC’s. Ancestry allows each elf, for instance, to have elf traits, but allows for customization, and while maintaining the flavor of their ancestry, each elf will be different from other elves in the party through the selection of ancestry feats.

Background is a more robust form of traits. The core rulebook will only have 18 backgrounds, but it sounds as if many releases will include more backgrounds, and they appear easy to create. The final choice is the class, and in this case, we saw druid. Each class has its own set of feats that, like ancestry, allow you to tailor and customize your character to play the character you imagine. Pathfinder 2.0 looks to be keeping the great focus on character customization that I love from Pathfinder 1.0.

Some tidbits from the slides– Druids now pick an order such as leaf, making the druid good at manipulating plants, or storm, to affect weather, wild, for the whildshape specialists, or the animal order to focus on animal companions. While each can take aspects of another, this is what your druid will be best at. Some feats we saw included “metamorphosis,” to become a plant person (I think!), and “evoke disaster”– always nice causing earthquakes!

We also got a glimpse of a few pages on animal companions. Starting as a young creature and aging as you level, they are also customizable, so one druid’s snow leopard will be quite different than the next druid’s.

Druid spells come from the new primal spell type (we now know about Arcane, Divine, and Primal, and there’s a as-yet-unannounced fourth type.)

Jason also talked about magic items, including a new type called trinkets, one time use items referred to as “scrolls for fighters,” items you can attach to a weapon or your armor for a one time effect.

A nice bit of news from Lone Wolf Development is that Hero Lab Online will be supporting the Pathfinder Playtest, according to the slide, starting this August!

Paizo is releasing an adventure specifically for the Playtest, Doomsday Dawn. This 7-part adventure spans everything that has occurred so far in the Pathfinder APs. Starting one month prior to the Swallowtail Festival in Sandpoint, up until current Golarion time. We’ll be hopping between locales and adventuring in different points in time, getting to experience all aspects of the game, starting with character creation, with further adventures sometimes having us go through the leveling process, and sometimes using different characters.

Each of the 7 sections of Doomsday Dawn will focus on different aspects of the game design. They have a short time frame, just a few months, to finalize the rules before having to get a final version off to print for a GenCon 2019 release, so section one will have a three week time frame with each section after that being two weeks. GMs are asked to track specific things for each session, and GMs and players will be filling out surveys specific to the section. In addition Paizo will be following the playtest forums, and conducting twitch streams of their discussions and some of their in-house playthroughs.

The playtest will be accompanied by a 124 page PDF containing 266 monsters. This will include all the monsters from Doomsday Dawn, as well as more in case we want to go beyond the included module in our playtesting. The PDF will also include hazards, traps, and rules to build encounters.

I’ll be learning more about the playtest as I get to play in a session on Sunday at PaizoCon.

Wrapping it up From Saturday at PaizoCon 2018

The one thing I was surprised not to see anything on was Owlcat Games Pathfinder:Kingmaker which is scheduled to release in August I believe. It is, however, being demoed, in the on-site store, and from what I’ve seen, it’s going to be my video-game of choice for awhile in the near future. It seems to represent Pathfinder character generation superbly, and I look forward to controlling my little character avatars through the River Kingdoms of Golarian.

Once again, I enjoyed the food and loved meeting new people.

Guest Artist Taylor Fischer was a pleasure to hang out with, and it was fun grilling her as well as Sonja and Sara from Paizo on their gaming, work, and other tid-bits– check out Taylor’s way-cool tiny house project. She built this herself, starting with just a trailer. Also, if you get a chance, commission her to draw something, she’s awesome. I’ll include what she drew for me in my PaizoCon wrap-up– until then, game on! 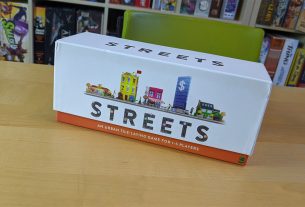 It Takes Work to Be the 51st State