Ray: DC’s done a lot of these oversized anthologies lately, usually themed around holidays, and next up is Young Monsters in Love #1 for Valentine’s Day. With a theme of twisted love stories and a focus on some of DC’s more oddball and monstrous characters, the issue has some top-tier creative teams and overall delivers a strong package.

Corrina: The stories are all first-rate, though there is one that stands out for me, but I have to mention my only niggle: very few of these tales are happy endings.  They’re full of love and longing and heartbreak but not so much full of happily ever afters.

Ray: First up is Kyle Higgins and Kelley Jones’ Man-Bat story. It’s rather oddly different from Man-Bat’s status quo, turning Francine into the voice of reason who couldn’t tolerate Kirk’s ongoing addiction, but the story has a strong core of self-respect and loving oneself, as well as a genuinely creepy Man-Bat courtesy of Jones.

Corrina: Man-Bat has always been a creepy concept but I’ve never quite read Kirk Langstrom’s alter ego like this and it does more than most Man-Bat stories to show exactly what drives Langstrom back to his monstrous alter ego, time and again. I’d say this one ends well, as self-love is kind of a happy ending?

Ray: Tim Seeley and Giuseppe Camuncoli’s Frankenstein story is an interesting divided narrative, as Frankenstein writes a heartfelt letter to his estranged former Bride, spliced with action scenes as he and the Bride battle an army of satan-possessed robots. Nice twist ending that adds a new LGBT character to the universe as well.

Corrina: Aw…I was hoping for a happy ending for Frankenstein, only to have it undercut by the last panel. It’s an effective tale, though I still think his Bride is drawn a bit too sexy for a monster.

Ray: Mairghread Scott and Bryan Hitch’s Superman story has some nice Superman family scenes, but the core of the story is actually Solomon Grundy, who has one day a year when he’s not a rampaging monster. This issue seems to be all about compassion for the monstrous, and there’s no character who epitomizes that – at least when written well – than Superman, so kudos to this story.

Corrina: I could see where this story was going, especially for Grundy, and yet it carries an emotional punch despite all that.

Ray: Jackson Lanzing and Collin Kelly team with former Nightwing artist Javier Fernandez to turn the focus on Raven, as she helps a homeowner exorcise a troubled ghost – only to find that the ghost has a painful story and a very simple request that she can help him put to rest. This was one of the most powerful stories in the book and another indication that Lanzing and Kelly should be on a big book for DC.

Corrina: I’m a sucker for a poignant ghost story and this was my favorite tale in the special. It’s not just the beautiful melancholy of the ending, which is perfect, but on Raven’s insistence that the ghost tells her the truth.

Ray: My favorite story in the volume was undoubtedly Paul Dini and Guillem March’s Deadman tale, as he tells the story of a Valentine’s Day gone horribly wrong, Deadman’s possession saving a little boy from an awful fate, and a powerful intervention in a classroom ruled over by a particularly cruel bully with a dark secret of his own. This is a story that not only works for this anthology, it could very easily be a story read in anti-bullying activities around the world. Definitely the best use of Deadman we’ve seen in a while.

Corrina: This isn’t so much a Valentine’s Day story–that’s the backdrop–but it is a great Deadman story, making terrific use of the character to right what would seem to be a small wrong to the universe but what means the world to the boy and, eventually, to the bully. I would love to see more of these down-to-earth Deadman stories rather than the ones focused on his mythic origins.

Ray: Mark Russell and Frasier Irving’s Swamp Thing story is gorgeous, with some very haunting visuals and a disturbing ending twist, but the story of Swamp Thing’s doomed romance features a rather predictable and annoying fridging.

Corrina: This one…I didn’t like so much, as it depends on a very predictable fridging. Great visuals, however.

Ray: You wouldn’t expect the weird villain gag couple of Monsieur Mallah and the Brain to have one of the most emotional stories in the volume, but that’s the greatness of Steve Orlando and Nic Klein’s story – they approach these odd villains as characters, with the hostage situation that kicks off the story having real stakes for a couple in love. And I don’t think it’s a coincidence that Maggie Sawyer is the officer tasked with resolving the situation – a gay cop will have a very different view of misfits like these two, and the story ends on a great romantic note.

Corrina: Aw. if you didn’t feel a ping of sympathy for Mallah and the Brain, then I don’t know what to say, because this story is full of the power of (twisted) love. (They are murderers, after all.) It’s always been more of a joke that Mallah loves the Brain but, here, for the first time, we learn why and it’s not a joke at all.

Ray: Then there was Alisa Kwitney and Stephanie Hans’ story, which brought back one of my favorite obscure characters from the New 52 era, the supernatural creation I, Vampire. This tale partners him with his newly half-vampire love interest Deborah, as they navigate the new dynamic of their relationship. Hans’ art is brilliantly gothic, and this is a character who could definitely use a revival.

Corrina: Hey, a happy ending, finally! I would be thrilled to read a series featuring these characters.

Ray: The one weak story of the volume is the Hester/Colak demon tale, which continues the pattern of recent Etrigan stories to pit him against an army of generic demons. It takes a while to get into the story, but it turns out he’s on the trail of a former lover of his whose connection to demons turned her into a serial killer. Now he’s out to free her soul from hell, but unfortunately, the tale is neither romantic nor frightening.

Corrina: This one didn’t do so much for me either, though it hinted that the reason the Demon can’t love is his own fault.

Ray: James Robinson and John McCrea close out the volume with a unique story dealing with the Creature Commandos, as vampire Velcoro struggles with the conflicts his mission and his vampire status are causing for his relationship back home and finds some comfort in his brothers-in-arms.

Corrina: I have no familiarity with the Creature Commandos but the talk between the two soldiers in the woods, supporting each other despite the changes that turned them into monsters, was possibly the best single scene in the book. The story has a few too many characters to bond with them all but made it’s point well.

Ray: I like that this volume didn’t just deal with romantic love, but family and friendship as well. With very few weak spots, this is a thoroughly enjoyable package.

Corrina: I also like how it explored all aspects of love. I just am a sap and wanted more happy endings. But, yes, agreed, that it’s a fine overall read. 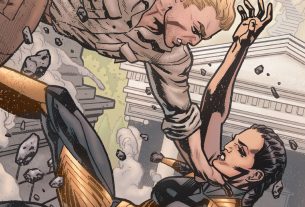