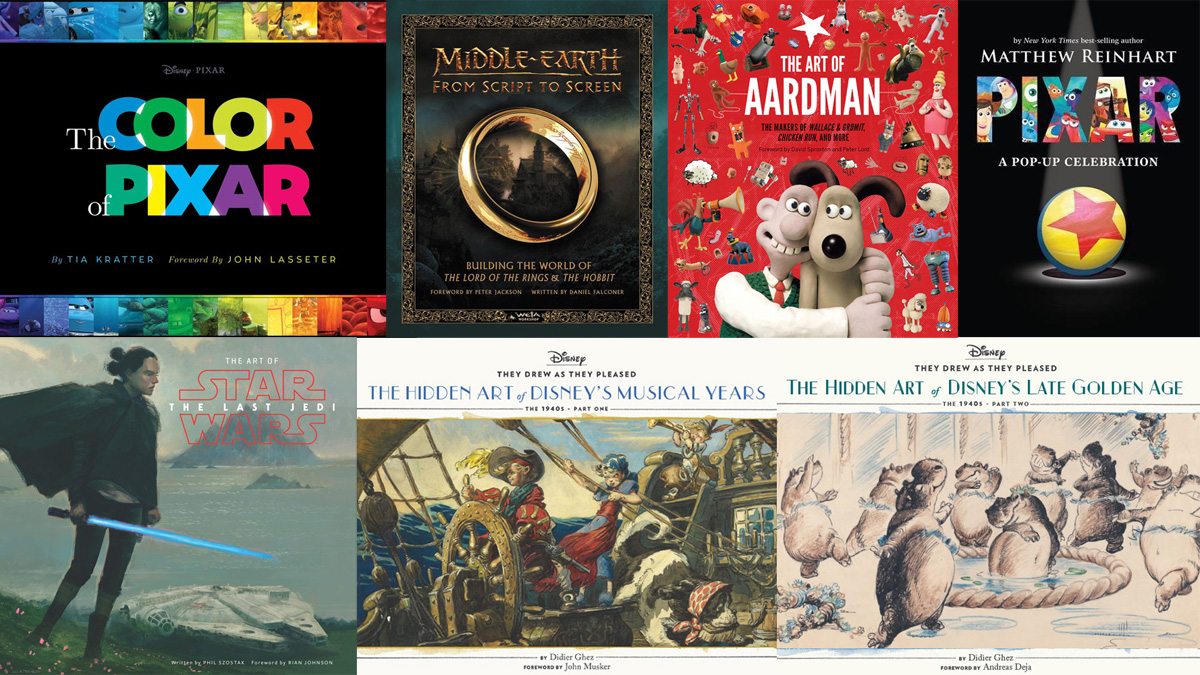 I’ve got another set of beautiful books for you today. I know we just covered some great coffee table books in November, but today’s books all have something else in common: they’re all about movies! 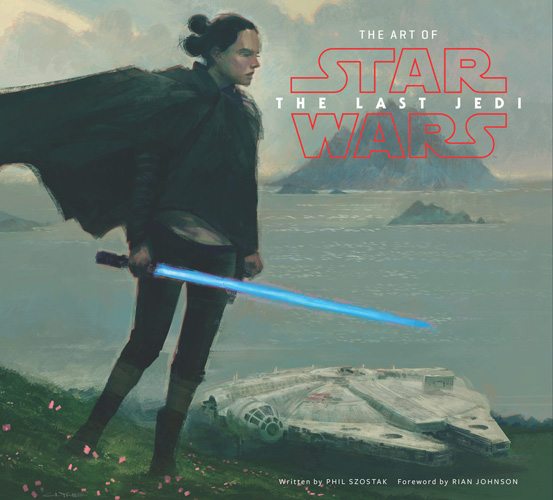 The Art of Star Wars: The Last Jedi by Phil Szostak

This is the latest “art of” book I’ve read through: an exploration of Star Wars: The Last Jedi, filled with concept art, character designs, spaceship sketches, costumes, and more. Interestingly, the book also includes concept art from a key scene (you know the one) in The Force Awakens that was left out of its own art book to avoid spoilers … though I always assume that if I read an “art of” book, there will be spoilers involved.

If you’re a fan of the film, then it’s definitely a book you’ll enjoy flipping through, just to explore more of the world of the movie. I love getting to see the creative process: how did they decide what the Jedi temple would look like? Where did those bombers come from? What’s the inspiration for the various weapons used by the stormtroopers?

In addition to the copious image captions, there is also text by creative art manager Phil Szostak about the process of making the film, from the first meetings to discuss where the movie was going to go. I know in theory that it takes along time to make a film, but reading about the dates of meetings and script-writing and seeing how it overlapped with the other films like The Force Awakens and Rogue One was still eye-opening to me.

The one thing I found very odd about the book, though, was the way that the “chapters” were organized. The images are roughly grouped topically, with chapter titles like “The Man Behind the Curtain” (about Snoke) or “Rey and the Jedi Steps.” But Szostak’s text is arranged chronologically, and apparently just evenly segmented across these chapters. So, when you see the chapter title followed by a big block of text, you’d naturally expect that text to be related to the title. Nope. It’s just notes about the production, following the calendar of what came before. I think I would have liked more text (aside from the captions) about the design process, rather than text that seems largely unrelated to the images that accompany it.

Still, it’s an impressive book even if you’re just flipping through the pictures, and the story itself is fun for film geeks—just don’t expect the two to fit together very well. 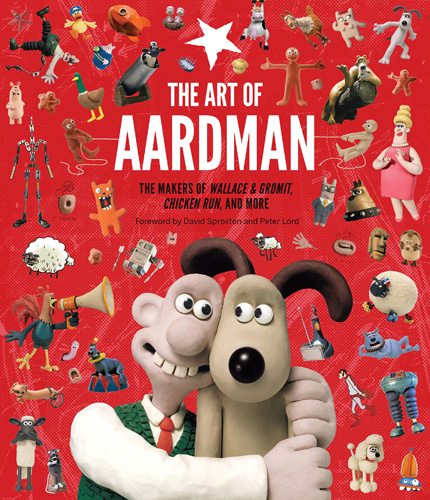 The Art of Aardman

I’ve been a fan of stop-motion animation for a long time: from the California Raisins to Gumby to Clash of the Titans (the old one, of course). I attempted my own clumsy animation with a VHS camcorder that couldn’t shoot clips shorter than a full second, with clumsy armatures made of aluminum foil covered with stiff modeling clay that didn’t bend well.

In college, I was introduced to Wallace & Gromit, and immediately fell in love with Wallace’s cluelessness and Gromit’s silent ingenuity, with the crazy contraptions that got Wallace out of bed and dressed, with Feathers McGraw (the criminal penguin cleverly disguised as a chicken). I found more animation created by Aardman Studios, like the Creature Comforts shorts and the adventures of a little clay man named Morph. In recent years, I admit that I hadn’t kept up as much: I really liked Chicken Run and The Curse of the Were-Rabbit, but Flushed Away didn’t quite do it for me. Still, there’s a special place in my heart for Aardman, so I was excited to see this “art of” book, which spans the whole of Aardman’s story.

Rather than grouping the book by the various shows, it’s grouped by the various stages in the creative process: the initial idea, character design, set design, creating the puppets, and lighting. Each section has images from many different films and shorts. The book includes everything from initial sketches to production stills, so you really get to see a lot of the process. The one thing there isn’t much of is text. Other than forewords by Peter Lord and David Sproxton, there’s just a small introduction to each chapter and then lots of images, usually without much explanation. I’d love a more in-depth look at things, but the visuals are still a lot of fun to peruse. 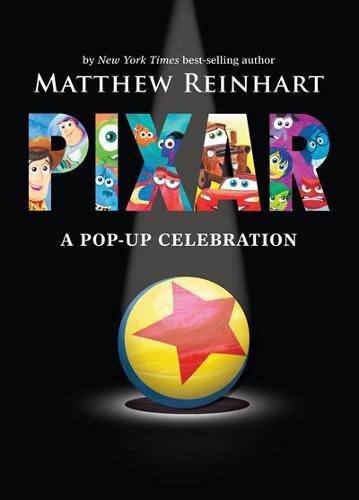 Matthew Reinhart is a master of pop-up books, and this celebration of Pixar is a treat for fans. The book is quite large, and even though there are only 5 spreads in the book, each of them includes several pop-ups. There’s a central image that pops up when you turn the page. In addition, there are some tiny pop-ups listing the Pixar shorts (oddly, the first two are both labeled 1984–1997, rather than splitting them into two periods), with the title posters appearing from a film strip tab. Finally, each feature film gets its own pop-up, and it’s always amazing how much springs out of these seemingly tiny squares.

One of my favorites is the pop-up for Inside Out, which has Riley’s head in 3D—peering through her pupils reveals the emotions sitting at their control panel inside. Each image shows an iconic moment from a film. If you love Pixar films as much as I do, you’ll have fun marveling at Reinhart’s masterful paper sculptures.

There isn’t a whole lot of text: just a paragraph per spread that talks about Pixar itself and the process of making films, rather than focusing on specific films. The book covers the period from 1984 (The Adventures of André & Wally B.) up through 2017 (Cars 3 and Coco). 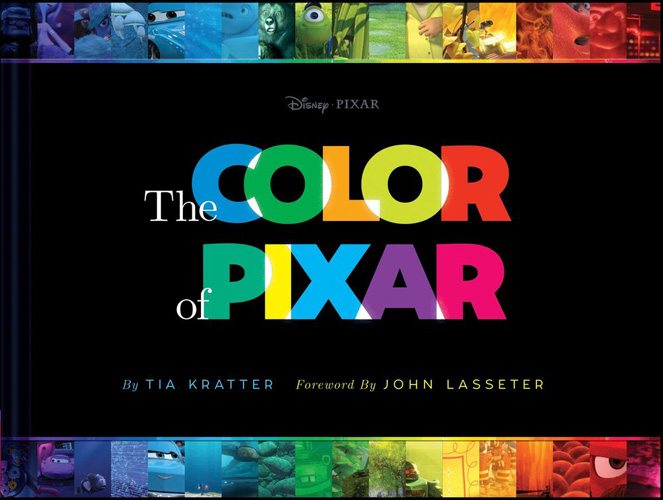 The Color of Pixar by Tia Kratter

While we’re on the subject of Pixar, here’s a very fun book that is just images. It’s actually a smaller book than the others in this column (cover images aren’t to scale), but still chunky at 350 pages. There’s a brief foreword by John Lasseter and an introduction by Tia Kratter (Shader Art Director at Pixar), but the rest is entirely images from Pixar movies, accompanied only by the film’s title and year of release. Kratter explains the importance of the color palette in films—the way it ties a movie together, like a soundtrack, evoking emotions or connecting different sequences. I’ve seen in Pixar “art of” books that there’s often a page that shows the “color script,” a sequence of hues that map out the movie.

The Color of Pixar takes individual frames from Pixar feature films, and arranges them in a color spectrum. It shows how an individual frame of a film, meant to be seen in the blink of an eye, can still stand as “a work of art in itself,” as Lasseter puts it. It also shows how the overall color of an image affects the mood and feel. Although it doesn’t have any behind-the-scenes stories or making-of secrets, it’s a book that long-time Pixar fans will enjoy poring over, because each frame will bring back memories of watching these films. 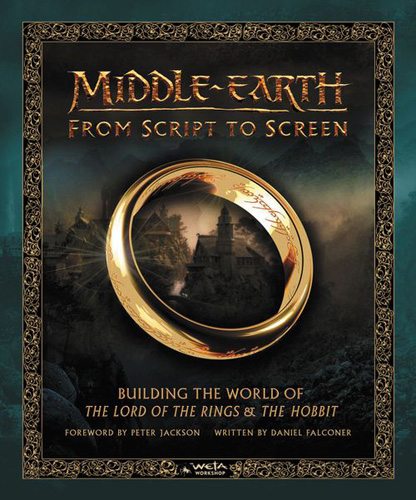 Middle-Earth: From Script to Screen by Daniel Falconer

This massive tome is nearly the size of a hobbit, weighing in at just over 500 pages—but it takes a huge book to chronicle the 17-year journey of bringing The Hobbit and The Lord of the Rings to the big screen! (In this instance, I’m assuming we won’t get a 700-page “director’s cut” of the book next year.)

The book is organized geographically. In fact, the table of contents is a map of Middle-Earth, so you may need to know a little bit of the geography if you’re looking for a particular scene. And the geography and locations are really the focus of the book: what they look like, how they were built, and what happened there. The downside to this is that if you want to look up a particular character, you may not always know where to look. Most of the hobbits, naturally, appear in sidebars in the chapter on The Shire. But what about Gandalf? He’s in the Lands of Arnor chapter. Some of the dwarves are in Lands of Arnor, and some are in Khazad-dûm. Sections about film-making techniques, like motion capture or set and prop finishing, are also scattered throughout the book and don’t appear in the table of contents, so you may have to rely on serendipity to find them if you’re not reading the book cover to cover.

And, I’ll admit, this is one I have not read straight through yet. (Nor have I ever gotten around to watching my extended-version Lord of the Rings DVDs, I’m sad to admit.) But I do love flipping through it, looking at the images, which range from sketches to construction and behind-the-scenes photos to production stills, and reading bits and pieces of what went into making this truly epic film series.

These two volumes trace a lot of history of Disney in the 1940s. The first focuses on several projects that were largely music-based, like Fantasia. The second looks at the Character Model Department, which quickly became more than just a place to design characters but was sort of a story department in itself.

I grew up watching Disney animated films, but I didn’t know much about the history of the animation studio or many of the people who worked there. These books (along with an earlier volume about the 1930s) tell the stories of many of the artists who worked at Disney, along with many projects that were eventually shelved. The stories are told through interviews with family and friends, correspondence, and personal journals, along with, as you would expect, a lot of artwork and photographs.

Some of the images will be familiar: there are many illustrations from Fantasia, character designs from Pinocchio and Peter Pan and Alice in Wonderland … but there are also things that were never completed or aren’t well-known: Don Quixote, The Gremlins, Make Mine Music. The 1940s was a difficult time for Disney: Fantasia did poorly at the box office, which meant that many of Walt’s hopes for music-based features were shelved. The books tell of massive lay-offs and postponements. Many of the films begun in the late 1930s or early 1940s didn’t actually see release until the 1950s, by which point the artwork was redone.

These books truly show some of the “hidden” artwork from Disney. It’s amazing to see these lush illustrations and paintings, some of which are far from what you imagine as “Disney animation.” The stories of the artists are fascinating and, in some cases, heartbreaking. If you want to dive a little deeper into the history of Disney, these books are a great place to start.

This week, I read an older non-fiction comic book, The Age of Selfishness by Darryl Cunningham, about Ayn Rand and the financial meltdown. It’s definitely more sharply political (with an obvious leaning) than most things I generally cover here on GeekDad so I’m not sure if it will appear in a Stack Overflow, but I did find at least some parts of it informative and interesting to think about.

I also read the third volume of the Catstronauts series by Drew Brockington, and The Altered History of Willow Sparks by Tara O’Connor. And I’m still making my way through Nick Harkaway’s Gnomon, which I’m really enjoying—it’s large, and contains multitudes.

Finally, I’ve been making my way through some kids’ books about real women throughout history: Rosa Parks, Ada Lovelace, Virginia Lee Burton, just to name a few. Watch for a Stack Overflow on that topic sometime next month (I hope)! 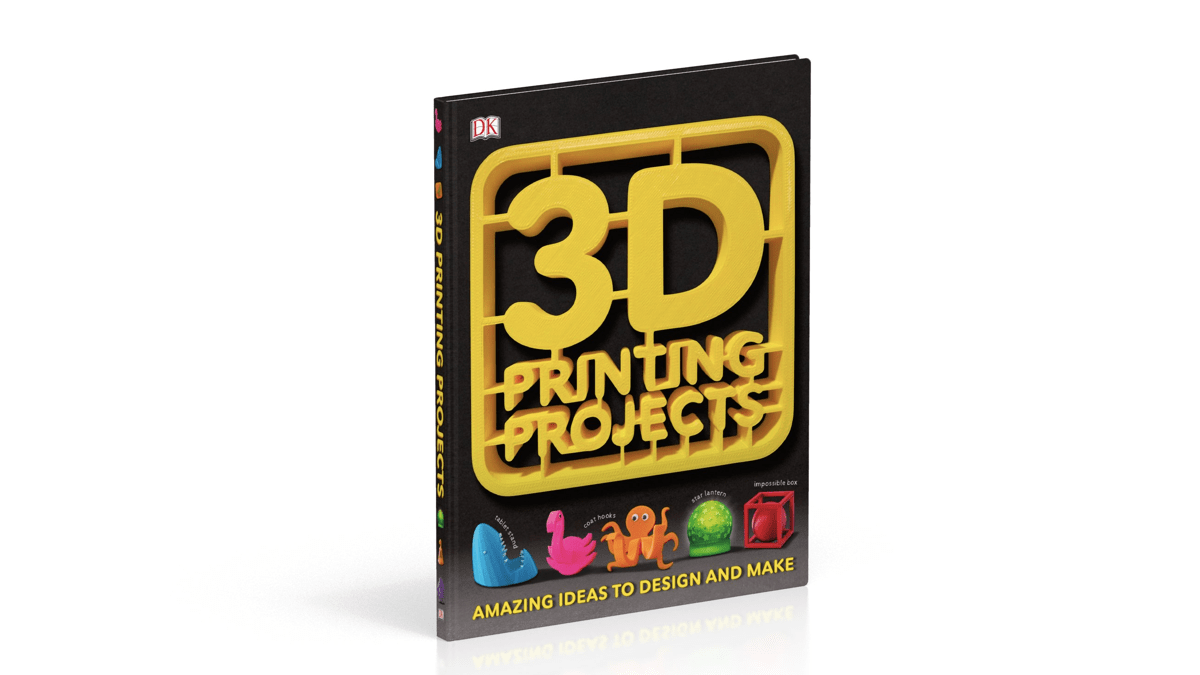 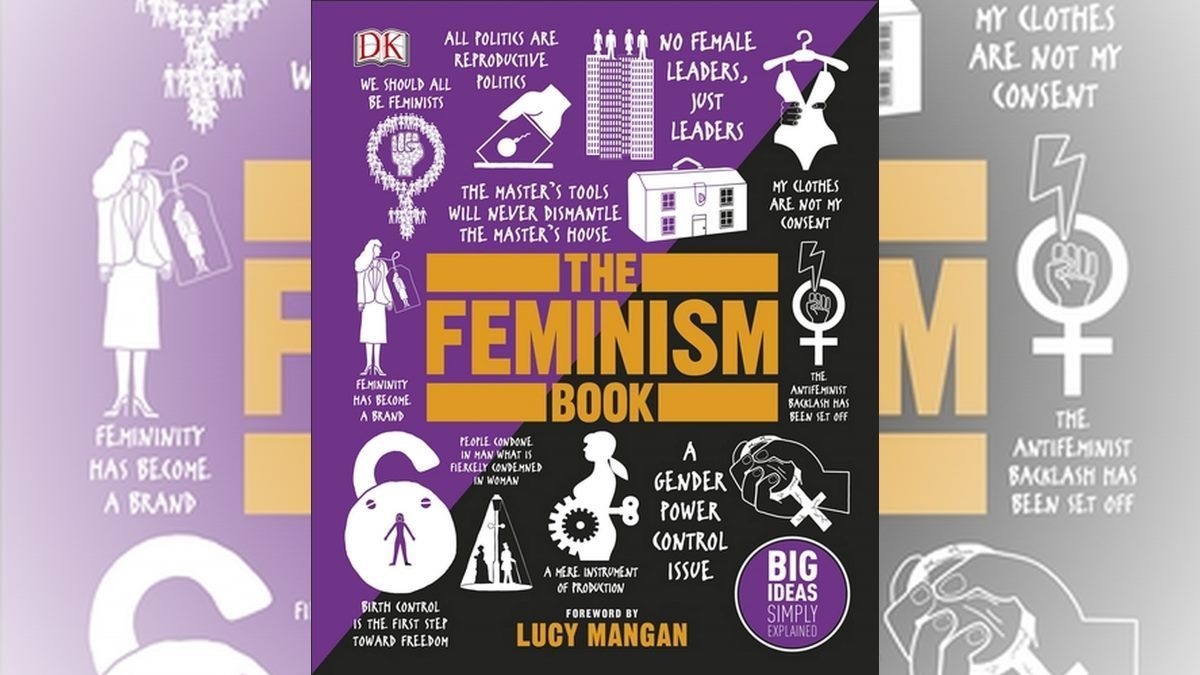