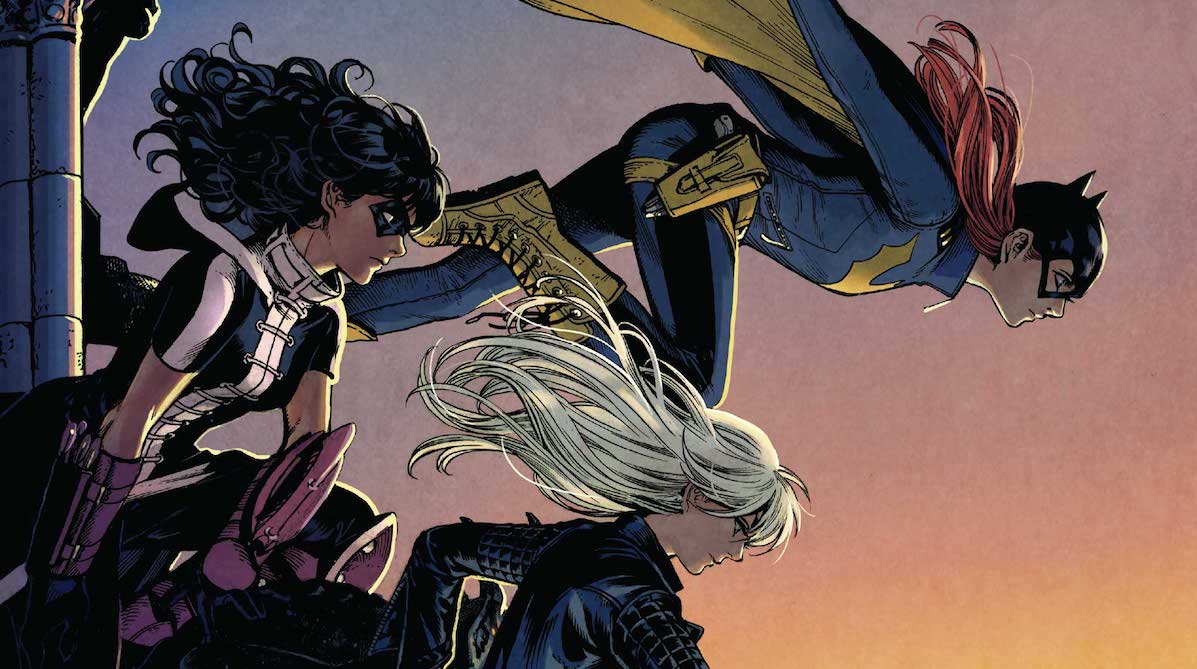 Ray: Coming on the heels of the elaborate “Manslaughter” arc, where the Birds went up against a bunch of genocidal straw feminists and teamed up with almost every prominent female character in the DCU, Batgirl and the Birds of Prey #18, a slight done-in-one issue, is a bit of a breath of fresh air. I just wish it was also compelling.

This is essentially a Charlie’s Angels story, not a Birds of Prey story, and as such it’s mainly played for laughs and pyrotechnics. The story begins with Huntress being contacted by Agent Tiger for a top-secret mission taking place at a tech conference in Paris. Barbara already is invited to the conference, so the Birds are able to infiltrate and uncover a plot involving clean energy tech. There’s a kind Japanese inventor with a plan to get cities off antiquated power grids, and a conniving billionaire who wants to steal the power for himself.

It’s all fairly boilerplate, but with a bunch of little touches that don’t really work. Black Canary, in particular, gets very little to do this issue – fake-flirting with the villain, and then constantly getting recognized by fans for her part in her band (I miss that series so much). The villain, who at first seemed like a corporate spy, soon turns out to be a ridiculous supervillain who uses stolen Weather Wizard technology combined with the clean energy tech he stole to create massive geostorms. His plan? Hold the world hostage from the top of the Eiffel Tower. I will say, this action segment is one of the best of the series, as the birds attempt to climb the tower, keep a civilian safe, and save the day. But the dialogue and plot just aren’t up to par here. It’s a serviceable issue without much obviously wrong with it, but that’s the best that can be said.

Corrina: I sound like a broken record every time I review this series but I will say it again: this series should be so much better. The problem is that the bond between the heroines lacks depth. They trades jokes and there’s comedy and they talk about how connected they are but I rarely have any moment that hits to the heart of the matter. It feels like they’re trying for the tone of the classic Birds of Prey series under both Dixon and Gail Simone but those runs had moments that hit hard at the emotions, such as Oracle and Black Canary’s first meeting, under horrible circumstances, or that tense moment when Huntress found out that Oracle had been manipulating her to change her behavior.

I see a ton of action, a ton of dialogue that is supposed to be fun, and little real emotion to Batgirl and the Birds of Prey. Perhaps because it lacks a plot that produces good character arcs? In the Dixon run, there was a character arc of how Dinah and Babs learned to trust each other. Even in the original miniseries, it was about Dinah regaining a sense of herself and what she wanted to do with her life.

Huntress is the one who supposedly changed the most in this run but while she says she has a new type of family, the characterization hasn’t supported it, beyond dialogue going from hostile to friendly. What moment made this Helena choose the Birds? It should have been big but I can’t pinpoint it. And that’s a problem.