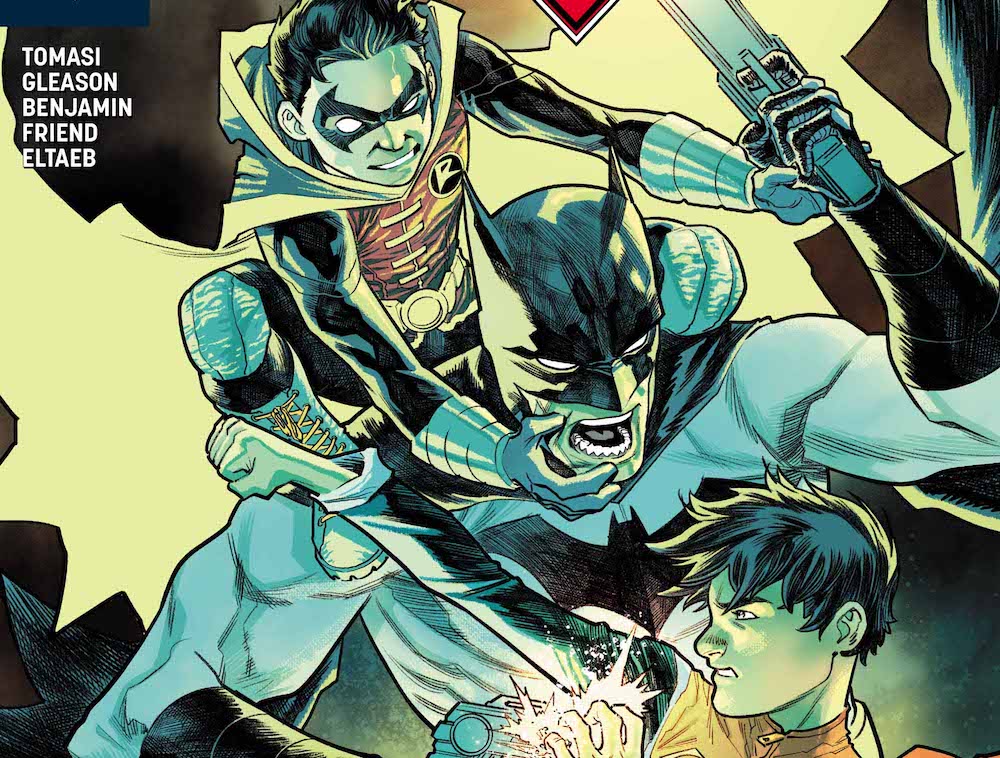 Ray: The second chapter of “Super-Sons of Tomorrow” takes all the problems of the first chapter and compounds them, adding in some disturbing dynamics that really emphasize that this series as a whole may not fully work due to the characters involved. (Note: for the review of part 1, see this week’s Superman review.)

The issue opens with Evil!Tim putting his plan to kill Jon into effect, spying on him from the rooftops, breaking into his apartment (while Lois talks to his friend Kathy, calling from Hamilton in a welcome cameo). He enters his room to capture him, finds it empty, and then tranqs Lois when she discovers him. Jon, meanwhile, is actually off in New York with the Titans, covertly helping them fight off a band of ill-defined terrorist villains known as The Hangmen, who seem to have a problem with the UN. Damian’s response to Jon helping them is to…shoot him with a smoke bomb and send him falling from a high-up Gargoyle.
And that sums up my issue with this series as a whole – Jon and Damian are not friends.

The scene continues with Damian berating Jon for following the Teen Titans around, and Jon countering that Damian promised to take him on missions (as a thank you for…you know, saving Damian’s life in the last arc) and never followed through. This is a kind ten-year-old boy who, for some reason, looks up to a thirteen-year-old bully who views him with contempt. This isn’t what Damian is supposed to be, though, and that’s the problem here. Damian got past these toxic parts of his personality long ago, and it’s sad to see him backslide. Then Evil!Tim attacks, natch, and we’re off to the races. He neutralizes their powers, shows them a future where their Superman (Jon) saw his powers go out of control and kill millions. He then shoots Jon with some sort of black symbiote, which…causes his powers to go out of control just like he was trying to prevent. Aside from a cameo at the end by Titans of Tomorrow Conner, Bart, and Cassie, this crossover is a massive disappointment. Shame that this is how the “Lost Titans” make their return.

Corrina: After having easily taken out Batman and Superman, Evil!Tim can now easily take down the Teen Titans too because he’s just that good, apparently. Except, he’s not, because the Titans have to become incompetent for this to work.

Which is not the same complaint that Ray had but, hey, I agree with all of his complaints as well. What’s Tim’s plan here? Create the Black Symbiote he’s trying to prevent? Ummm….bad saving the future, Evil!Tim.

The arrival of the future Titans only made me think “oh, no, not more of them.”

Did I mention I loved the setup from the last issue with the brand new HQ and school? I would have loved some of that. I don’t understand why this storyline had to happen. 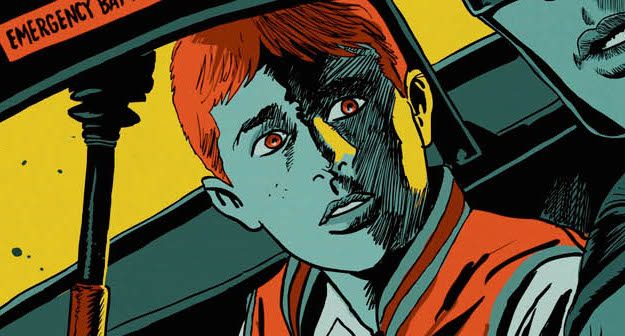