Ray: We’re only two issues in, but I can safely say that Batman: Creature of the Night is, in fact, the best DC Comic of 2017 (and the latter two issues may very well be the best of 2018).

This brilliantly human, poignant exploration of what it might actually mean to be Batman takes many of the themes of Superman: Secret Identity and gives us their twisted dark mirror. There’s a significant time jump in this second issue, taking Bruce Wainwright out of his vulnerable childhood and into his college days and eventually his business career. Unlike his namesake, he seems to be recovering from the death of his parents, becoming a more well-adjusted person while still deeply passionate about making the world a better place.

However, the mysterious specter of his “Batman” – a monstrous creature who hunts down criminals at his will – still lurks in the background. This issue reveals that at this point, Bruce can actually communicate with it, and the two work together. I’m not sure whether that makes the whole thing less or more disturbing. Despite some writers who are obsessed with “loner Batman”, Bruce has always been defined by his relationships, and this version is no different. His relationship with Alfred becomes more fleshed out as he hits adulthood and realizes why Alfred couldn’t raise him after he lost his parents. In addition, the concept of the “Robin” enters the picture in the form of a young girl who also lost her parents and became the first beneficiary of the scholarship foundation started by Bruce.

However, not all of Bruce’s relationships improve – Officer Gordon seems to become more and more suspicious of Bruce’s involvement in various cases. The way certain business deals fall into place for him when various rivals get caught up in criminal activity starts to look very odd. Ultimately, while the first issue of this series was about Batman through the eyes of a child, this issue casts a more critical eye on the concept. Batman is ultimately a lawless vigilante who answers to no one. A concept like that can’t be trusted to render fair verdicts or protect the innocent. The issue ends with a disturbing twist that sets up a fascinating back half of the series. Busiek, the mastermind behind Astro City, has yet another classic on his hands here.

Corrina: Busiek takes this story to places that I never expected and yet makes absolutely perfect sense within the concept and archetype of Batman.

Batman is a creature formed from a child’s rage and simplistic view of justice. But as the child grows up, will the Batman as well? That’s the essential question here and, indeed, has been the central question for many Batman writers over the years. Some creators choose to believe Batman is driven and psychotic, despite the good that he does, while others view him as Gotham’s Guardian, the one who protects people in the darkest of times.

The brilliance of this story is that Busiek has both version of Batman in one book. His Batman is a creature of vengeance and rage while Bruce Wainwright strives to be Gotham’s Guardian and help people out of the darkness. The terrifying Batman, as drawn by John Paul Leon, is an elemental rage, and it’s out of control, as rage tends to be. Bruce’s growing horror at what he’s brought in the world is gut-wrenching, for him and for the reader as well. Is Bruce too far gone to make up for the Batman’s sins? How much responsibility does he bear for them?

But this issue also spotlights how Bruce can mature and grown beyond Batman. The relationships he creates and his concentration on philanthropy demonstrate how a person can heal from tragedy and speaks to how many readers over the years have said that Bruce could be guarding Gotham better in an office than in a cape and cowl.

I fear things will get worse for Wainwright before they get better. 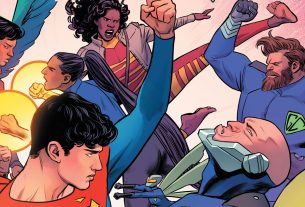