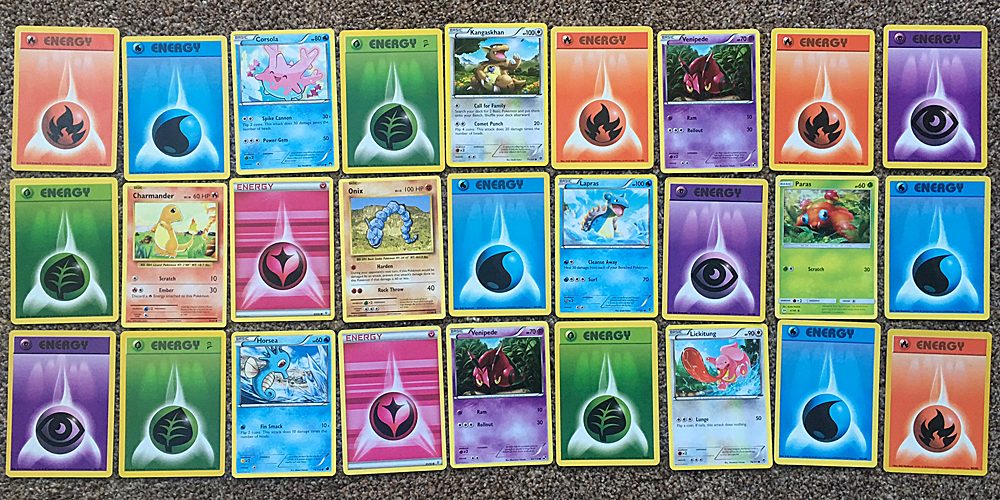 Did someone on your list ask for Pokemon cards this year? Do you know nothing about Pokemon cards? Do you feel slightly overwhelmed by the variety of different sets available? GeekMom is here to help!

One of the things my son asked Santa for this year is Pokemon Cards. Despite growing up during the original Pokemon boom, I never got into collecting the cards myself, and so my knowledge of them is almost non-existent. Walking into my local toy or games stores didn’t help much because I would find myself confronted with dozens of different packages at varying prices and no clue which sets would make a good starting point. After spending some time investigating, I wanted to share my findings with others who are struggling to know what sets to buy this holiday season.

The Basics of Pokemon Cards

The Pokemon Trading Card Game is a collectible card game. In order to play, you need a deck filled with three different types of cards: Pokemon, Energy, and Trainer. The first two of these are the most important: you need Pokemon cards to attack your opponent, and energy cards to allow your Pokemon to use their attacks. Trainer cards can be items, characters, and places which help by providing bonuses. A good deck contains a well-balanced combination of all three card types. For more information, read Cathé Post’s two-part guide to building a deck and playing the game, but in order to play yourself, you’ll need some cards.

The best purchase I have found for a new Pokemon fan is a trainer kit. This is a very reasonably priced kit which allows you to open the box and start playing a game of Pokemon immediately, making it the perfect starting place. The box contains 60 cards split into two 30-card mini decks (a standard deck contains 60 cards), a playing mat, damage counters, special condition markers, a game coin, and two guided game booklets. These booklets are worth their weight in gold if you are new to the game because they guide you through two games, step-by-step, using the included cards.

Once I had worked my way through these guided booklets, I felt I had a solid understanding of the basics of a Pokemon card game which I could then expand on with more complicated rules. The two mini decks in this box also combine together into a full-sized deck once you get more deeply involved with the game. Quite simply, if you are looking for a simple, introductory pack for a new Pokemon player, this is the kit you want. There are currently three trainer kits available: Lycanroc & Alolan Raichu, Pikachu Libre & Suicune, and Latias & Latios.

Another “play straight out of the box” purchase, theme decks are a second great choice for new players. Each box contains a complete 60-card deck themed around a specific Pokemon, with the appropriate energy cards and other cards to enhance your game. Unlike the trainer kits, these decks are only designed for a single player, so you will either need to purchase two of them, or be prepared to find someone who already owns a deck to play against.

Booster packs are small, 10-card packs used to expand an existing collection. The packs are blind, so you won’t know which cards you are getting until you open it. These packs are great as stocking stuffers or party bag favors and are affordable with pocket money. However, they only work as expansions to a full deck, so don’t buy these unless you know the recipient already owns lots of cards.

Booster packs can be bought in many places from your Friendly Local Games Store to chain stores like Target or Toys R Us. Buying single booster packs online often isn’t the best choice economically, but Amazon often sells multipacks of boosters at a discount if you want to stock up for future rewards.

These large gift box-style sets focus on a specific Pokemon and contain special items such as special edition playmats, foil promo cards, pins, coins, and giant oversized cards. In terms of playing power, they simply contain a number of standard booster packs which could be bought separately, so with these sets, you’re really buying the special items. Great for existing players and fans of specific Pokemon who will enjoy the artwork on the giant card, but not the best choice for total newbies because you won’t be able to play with only the cards in these sets.

Another collector’s item, Elite Trainer Box sets also contain booster packs alongside various special items such as dice, card sleeves (to protect cards during play), and extra energy cards. Unlike the collections and premium collections, they do not focus on a specific Pokemon. Instead they become a box for holding your card collection, with dividers to keep your cards separated however you choose. This would make a great gift for an existing fan looking to take their collection to the next level.

Many other Pokemon card sets are available, but I hope these five will help you to make an informed choice when it comes to buying Pokemon cards this holiday season.

All the sets listed here also include a digital code which can be used to import your cards into the free-to-play Pokemon Trading Card Game Online, another great resource for learning to play the game.

2 thoughts on “How to Buy Pokemon Cards This Holiday Season”